“… do tell me if the Romagnoles have peace or war;
I was from there – the hills between Urbino
and the ridge where Tiber springs” (Inferno, XXVII 28-30)

Thus Guido da Montefeltro, as a tongue of fire in Malebolge, describes with nostalgia that sweet Latin land which he is native to, in the mountains between Urbino, in Montefeltro, and the summit of Mount Fumaiolo, where the source of the Tiber is.
Dante’s verses accompany us in discovering the municipality of Verghereto, between Romagna and Tuscany, and in particular Mount Fumaiolo (1408 metres above sea level), the highest peak of the Tuscan-Romagna Apennines from which the Tiber, a river sacred to the Romans, and the Savio, whose course flows down towards Cesena and Ravenna, originate.
Mount Fumaiolo is perfect for hiking and cycling along the many well-marked trails. It is particularly at its best in winter, when you can snowshoe through the magic of the snow-covered woods.
The main town Verghereto stands on a medieval rocky spur, where the ancient walls can be seen. The Tiber has its source near Balze, on the slopes of Mount Fumaiolo, a renowned tourist resort. On one of the Apennine passes, at 865 meters above sea level, we find Montecoronaro, which is of great natural beauty. Ville di Montecoronaro is also the location for the event dedicated to Italy’s smallest Slow Food presidium: the Cocomerina pear. Alfero, the municipality’s most populous hamlet, lies between the Comero and Fumaiolo massifs. Not far off is Riofreddo, a village with stone houses on a spur on a spur between the Alferello and the Radice rivers. Finally, La Capanna is a place with postcard-perfect scenery. 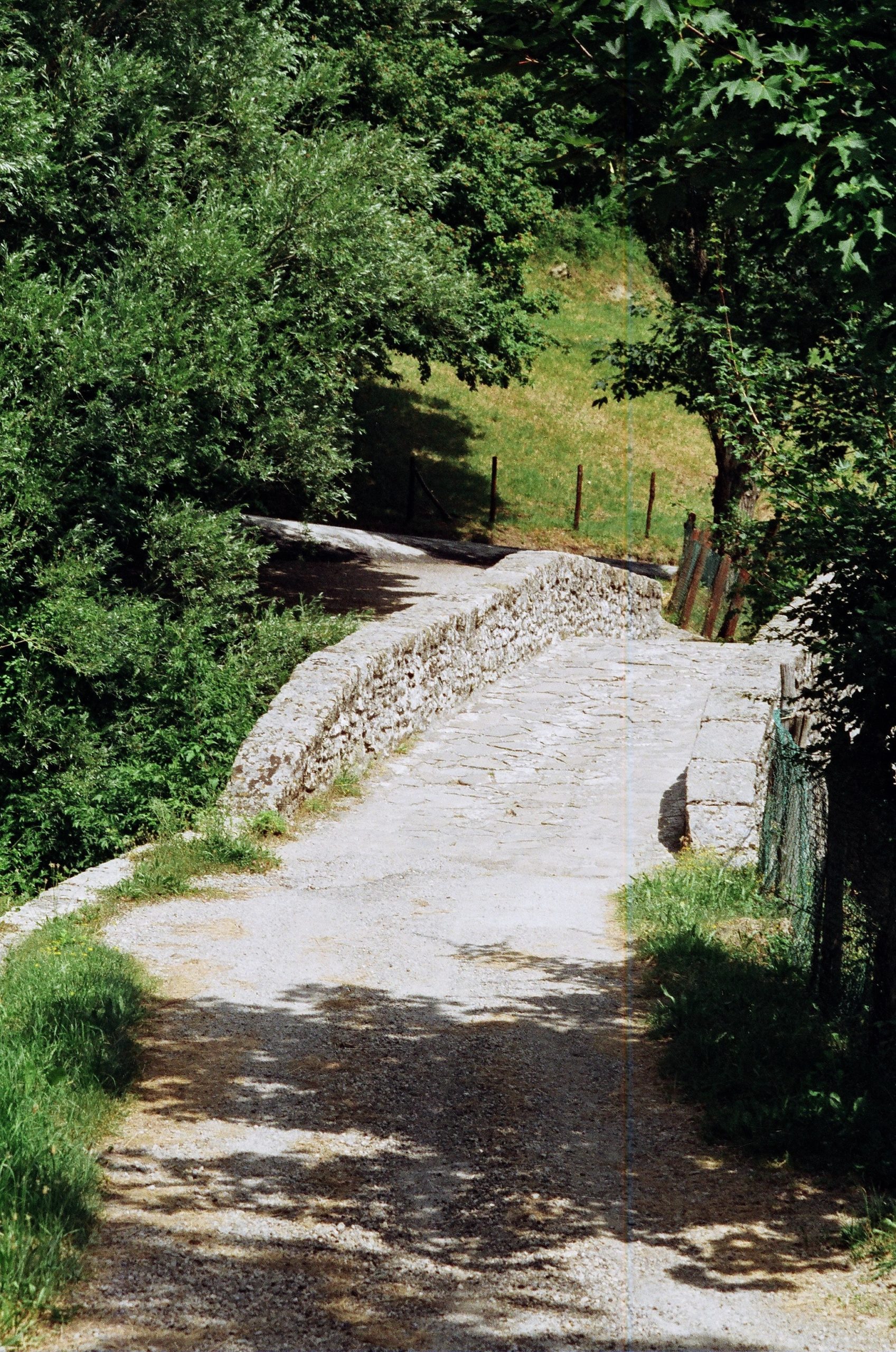 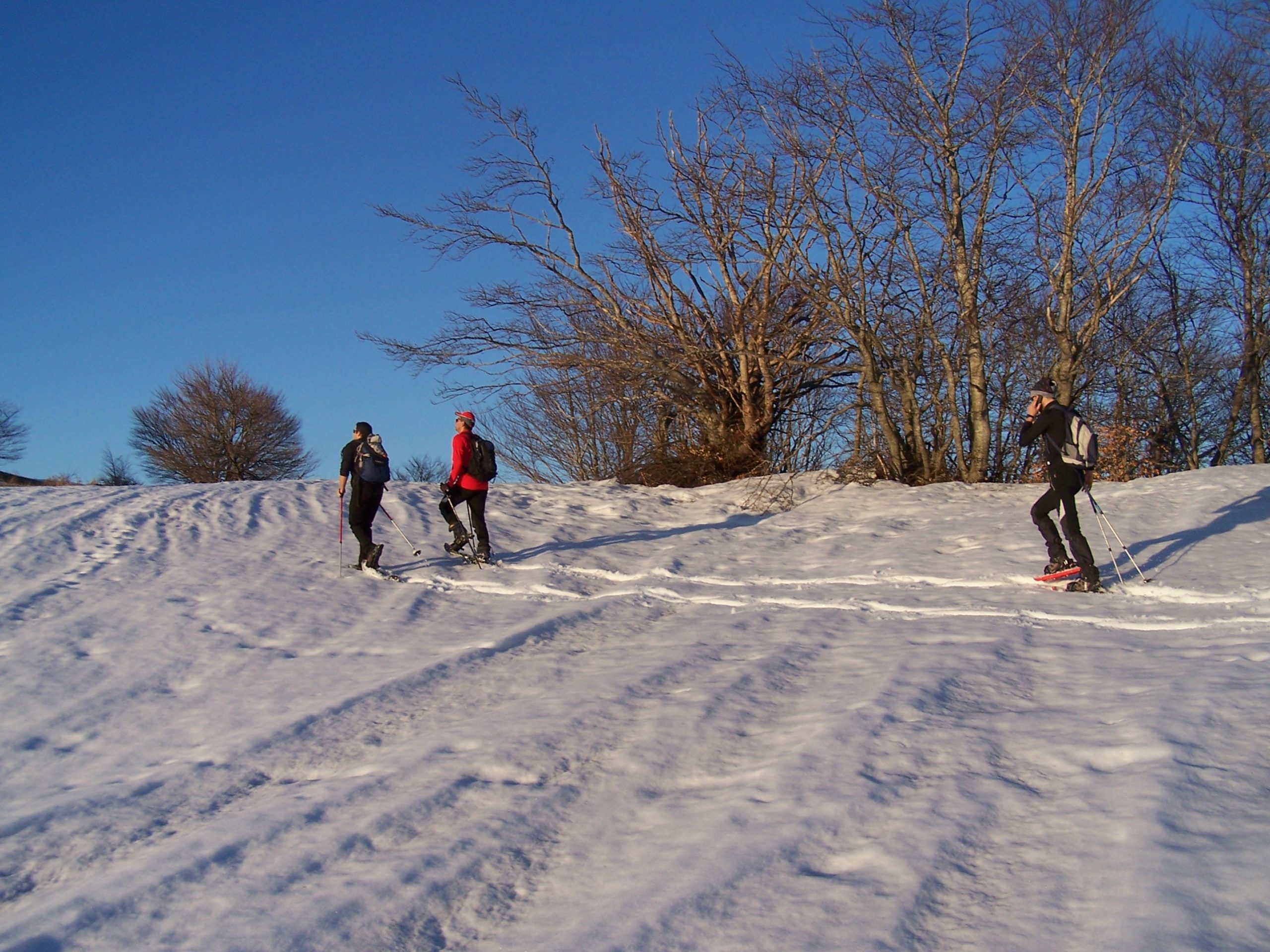 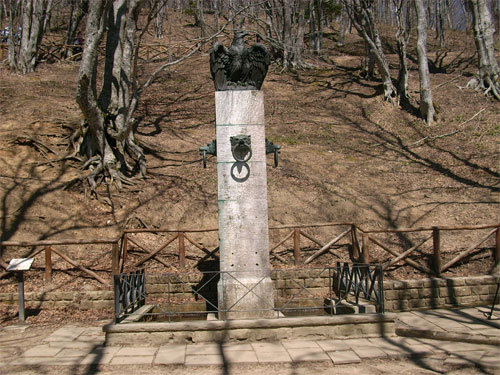 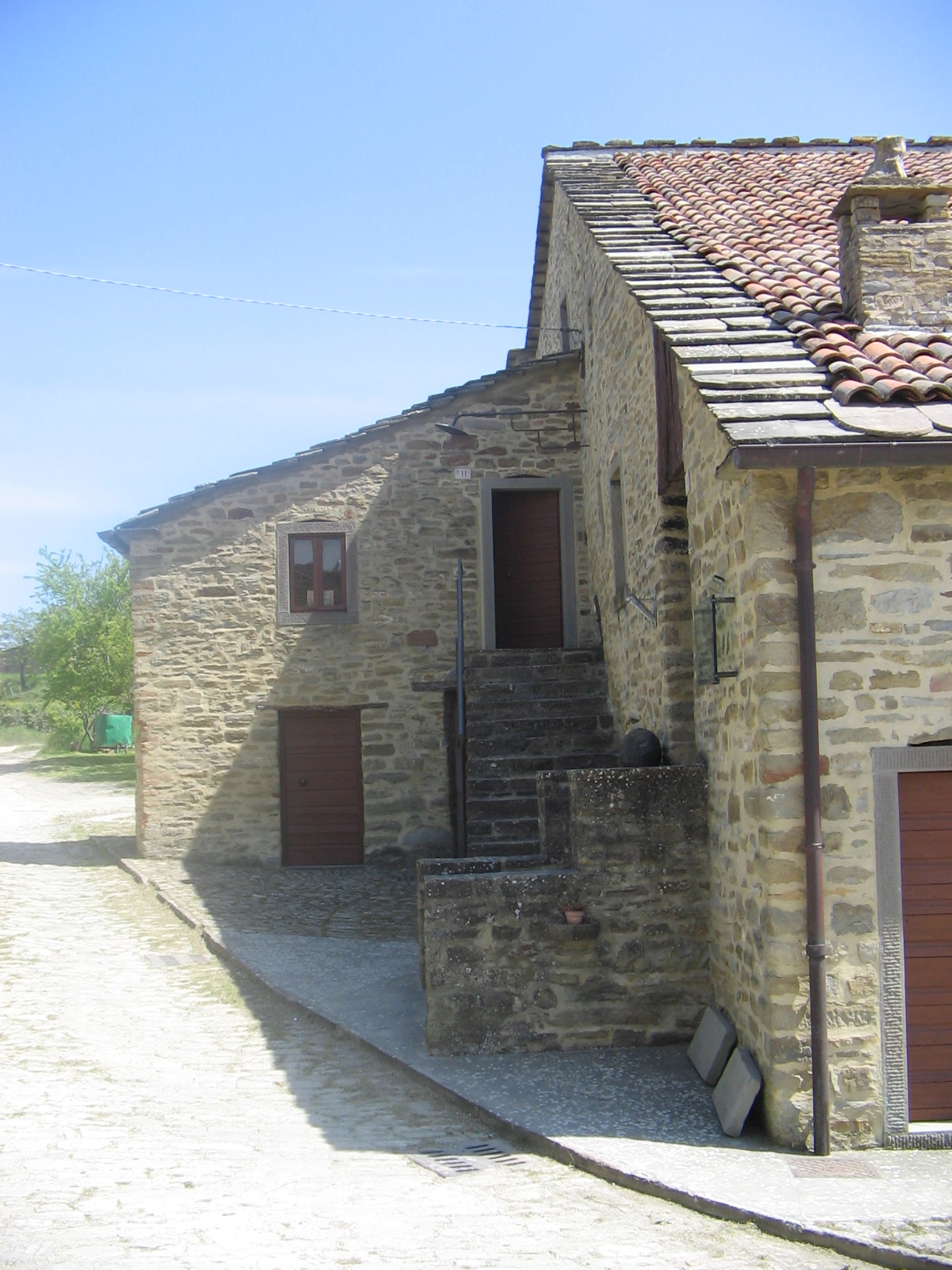 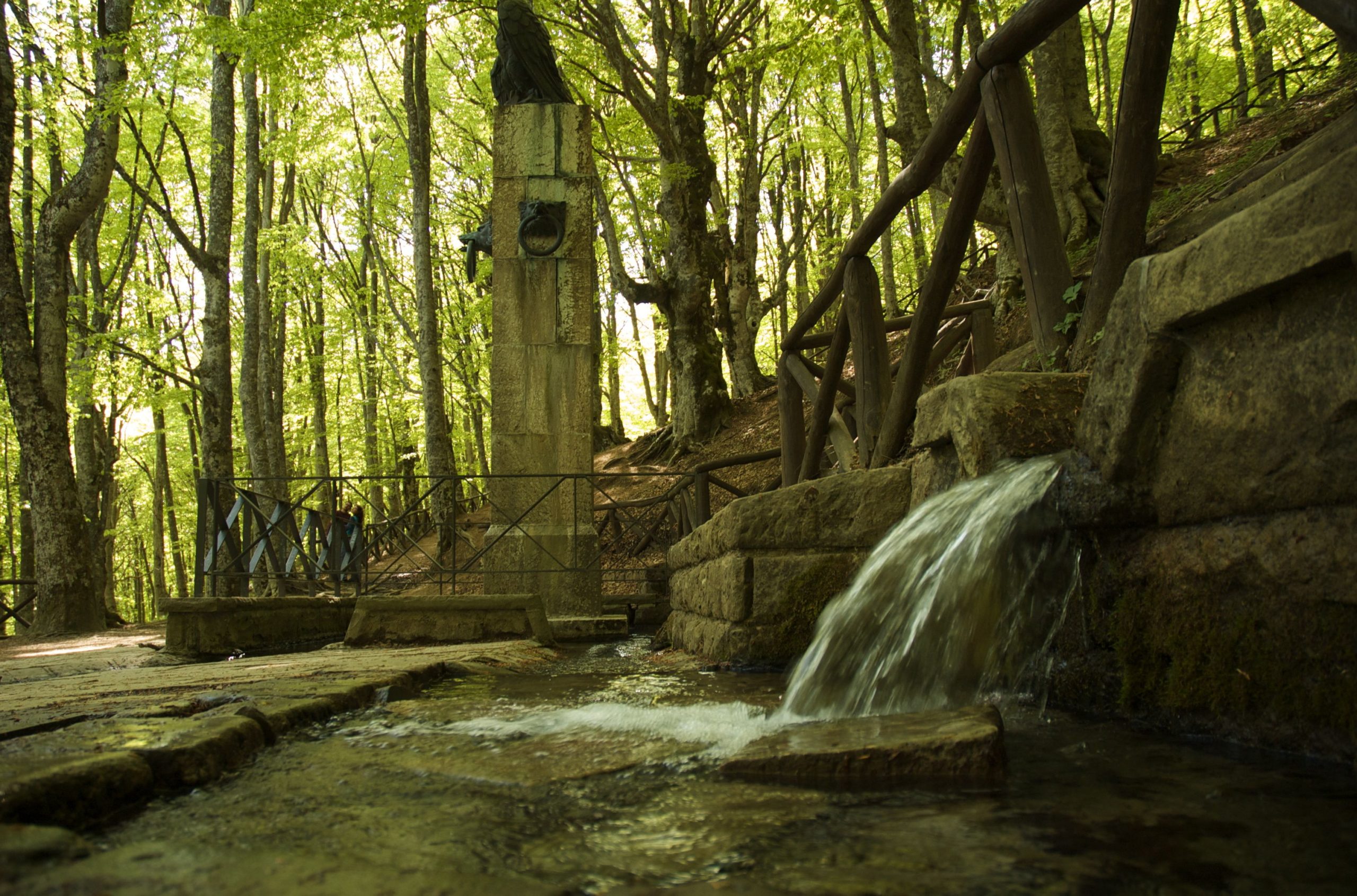 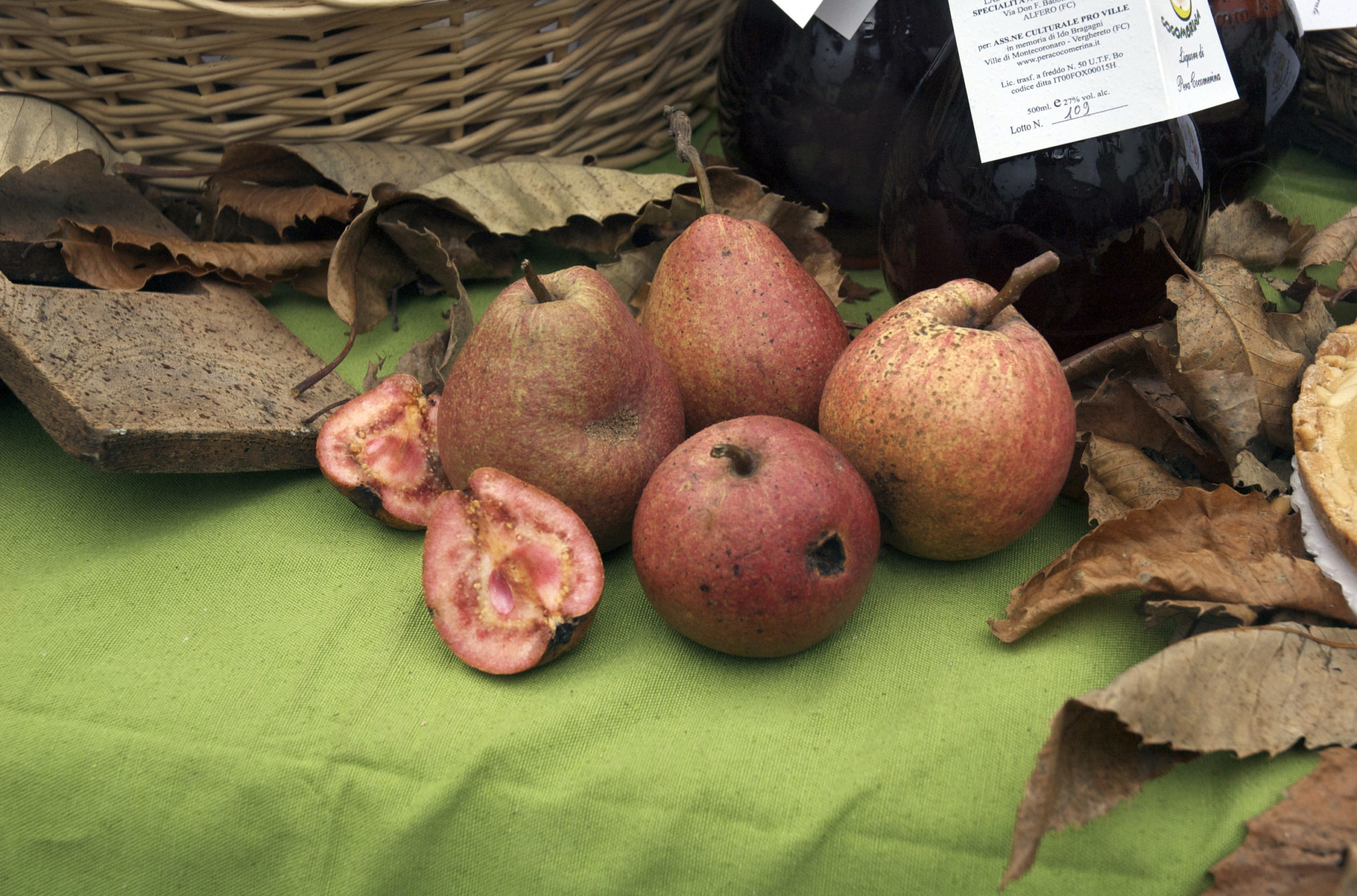 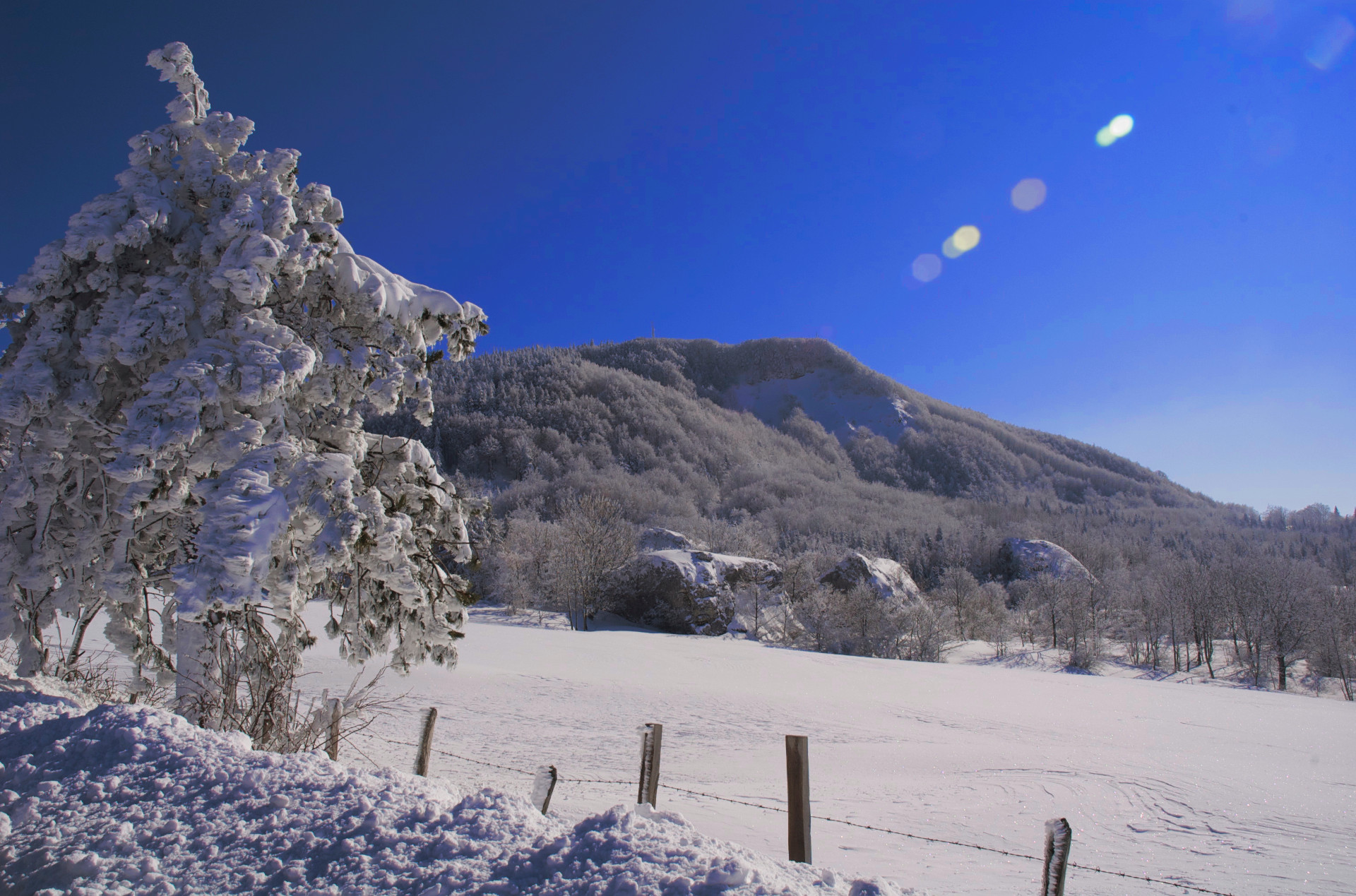 Mount Fumaiolo and the Tiber springs

Leave your thoughts and worries at home and bring along nothing but the desire for silence, nature, and fresh air. Every step you take on the paths of Mount Fumaiolo is a panacea for your health and your soul: the paths are simple and well-marked, mostly set in the woods, and feature some surprises that can be reached easily with short hikes, such as the Source of the Tiber, with a small waterfall not far away, the Hermitage of Sant’Alberico and various stone shelters with an antique feel, where you can rest.
Monte Fumaiolo has been recognised as a Site of Community Interest and as part of the Natura 2000 Network, due to its great natural importance. Beech, fir, Turkey oak and chestnut forests cover more than half of the area and there are spectacular rocky cliffs, including Ripa della Moia and Balze, in an area that also features ancient rural settlements.

At the source of the Savio, a river from the Divine Comedy

The route to the source of the Savio is a bit like a journey in search of the identity of Romagna: you climb up, you struggle, but at the top you can enjoy your destination and celebrate in true Romagna style, with a good sandwich, delicious slice meats and Sangiovese, the local’s favourite wine, at the picnic tables surrounding the springs.
The river originates with the name “Fosso Grosso” from Mount Castelvecchio at 1,126 meters above sea level, and along its 126 km course it flows past Bagno di Romagna, Sarsina, Mercato Saraceno, Cesena, and then flows into the Adriatic Sea between Lido di Classe and Lido of Savio in the province of Ravenna.
The Savio has the honour of being mentioned in the Divine Comedy, as Dante chooses it to describe the city of Cesena: “The city with its side bathed by the Savio” (Inferno XXVII, 52-54). In popular tradition, in fact, Dante is said not to have had the highest opinion of the people of Cesena. In one anecdote it is said that when they tried to rob him on the outskirts of the city, the Poet exclaimed: “There’s nothing wise here but the river!” (“savio” means “wise” in Italian).
On the site where the Savio river rises, it is possible to admire the iron monument with the image of the wolf, a symbol of the hamlet of Montecoronaro, and the rings of the “caveja”, a symbol of Romagna.

The Alferello waterfalls and the mid-19th century "Roman" bridge

There are spectacular somewhat hidden locations, which open up before your eyes and go straight to your heart.
The Alferello waterfalls are one of these: an extraordinary waterfall that lies in a wide emerald-coloured pool, hidden just a few steps away from the village of Alfero. The picturesque waterfall, also called the “trout waterfall” due to the abundant presence of these fish, is over 30 metres high and was created by the geo-morphological characteristics of the area, where layers of sandstone, which is hard to erode, and marl, which is more friable, produce the splendid “jump”. After the waterfall, the stream flows for about ten metres and descends through a series of beautiful “erosion potholes”, pools where you can seek refreshment in the warmer months. The well-signposted waterfall is easily accessible on foot from the village centre in about 25 minutes.
Not far away, you can admire the so-called “Roman” Bridge, a single-arched stone bridge resting on large boulders, actually built in the mid-19th century to replace a dangerous crossing over the Alferello which is often swollen with water.

A holiday in the Upper Savio Valley would not be complete without a gastronomic experience linked to its culinary traditions, which blends Tuscany and Romagna together in a triumph of flavours.
The products of the undergrowth, such as mushrooms, truffles and chestnuts, are skilfully used by local restaurateurs to create unforgettable delights, from crostini to fried porcini, from tortelli alla lastra to fresh pasta dishes, from zero-kilometre meats to traditional desserts.
During the autumn period, you can go down to Alfero, Acquapartita or Selvapiana, hamlets between Verghereto and Bagno di Romagna surrounded by one of the largest chestnut groves in Europe, to experience the “castagnata”, the gathering of chestnuts by private individuals who open their doors to tourists, and perhaps try a slice of “castagnaccio”, the typical sweet made from chestnut flour.

The Sant’Alberico Hermitage, a precious pearl in the middle of the countryside
“The hermit is one whom God has seduced and who has allowed himself to be seduced”: if you want to experience the sensations of life as a hermit, in silence and spirituality in the midst of nature, this is the place for you.
The Hermitage of Sant’Alberico stands at 1,147 metres above sea level, a place of austere solitude in the middle of the woods where silence reigns, inviting reflection and prayer. The life of the founder Alberico, who died around 1050, is poorly documented. What is known that he built a cell and two caves dug into the rock under Mount Fumaiolo, where he lived as a hermit. The hermitage, which was founded by the Benedictines and then run by the Camaldolese until 1822, came back to life after a period of neglect with Don Quintino Sicuro (1920-1968), an ascetic with extraordinary charisma. It is still inhabited to this day by a lay hermit. The hermitage is equipped for overnight stays (13 places) for retreats and spiritual exercises. The Feast of St Alberic is celebrated every year on 29 August, with a solemn mass and a small fair with traditional local produce. In summer, open-air concerts are often held at weekends.
The hermitage can only be reached on foot or by bicycle, via two routes. The first (about an hour’s walk) follows a path that branches off from the road towards Capanne, just outside the village of Balze. The second can be reached by car from Balze towards Capanne-Alfero. After three kilometres, on the left, you come to a secondary road which, after 1 km, widens into a large square, where you can park your car. From here, a short climb takes you to the hermitage in about 10-15 minutes.
The Hermitage of Sant’Alberico is at the crossroads of several circular paths on the Fumaiolo, including the Cammino di San Vicinio (St Viciunius’Way), which continues along the Savio Valley to Sarsina and beyond, and the Way of St Francis, which runs between Rimini and La Verna.
The Tavolicci House-Museum, a place of memory
The summer of 1944 remains engraved in the memory, in the stones, in the paths, in the hearts of this Apennine community. The Gothic Line ran through here, from the Tyrrhenian to the Adriatic, from Tuscany to Romagna and Marche, the site of numerous dramatic episodes of massacres of soldiers and civilians between the spring and autumn of 1944, in a spiral of reprisals and violence, the memory of which we wish to preserve in memory of the victims and so as to prevent similar events in the future.
In Tavolicci, a small village in the municipality of Verghereto, one of the most ferocious massacres took place. On 22 July 1944, the units of the 4th battalion of the Italian-German police broke into the small village and killed 64 inhabitants, 19 of whom were under 10 years old. They were locked up in a house in the centre of the town, where they were burned alive.
A week later, on 29 July, units of the same battalion, together with Italian SS units, shot another 27 people, some taken from the local hospice for the elderly, on the Carnaio Pass, in the municipality of Bagno di Romagna, a few kilometres away.
The Tavolicci House-museum has recently been restored, with a multimedia installation and guided tours by appointment, to retrace those episodes and safeguard the memory and warning that comes from history.
Nearby, there are also a number of paths to retrace “the places of memory” of the struggle of civilians and partisans along the Gothic Line. 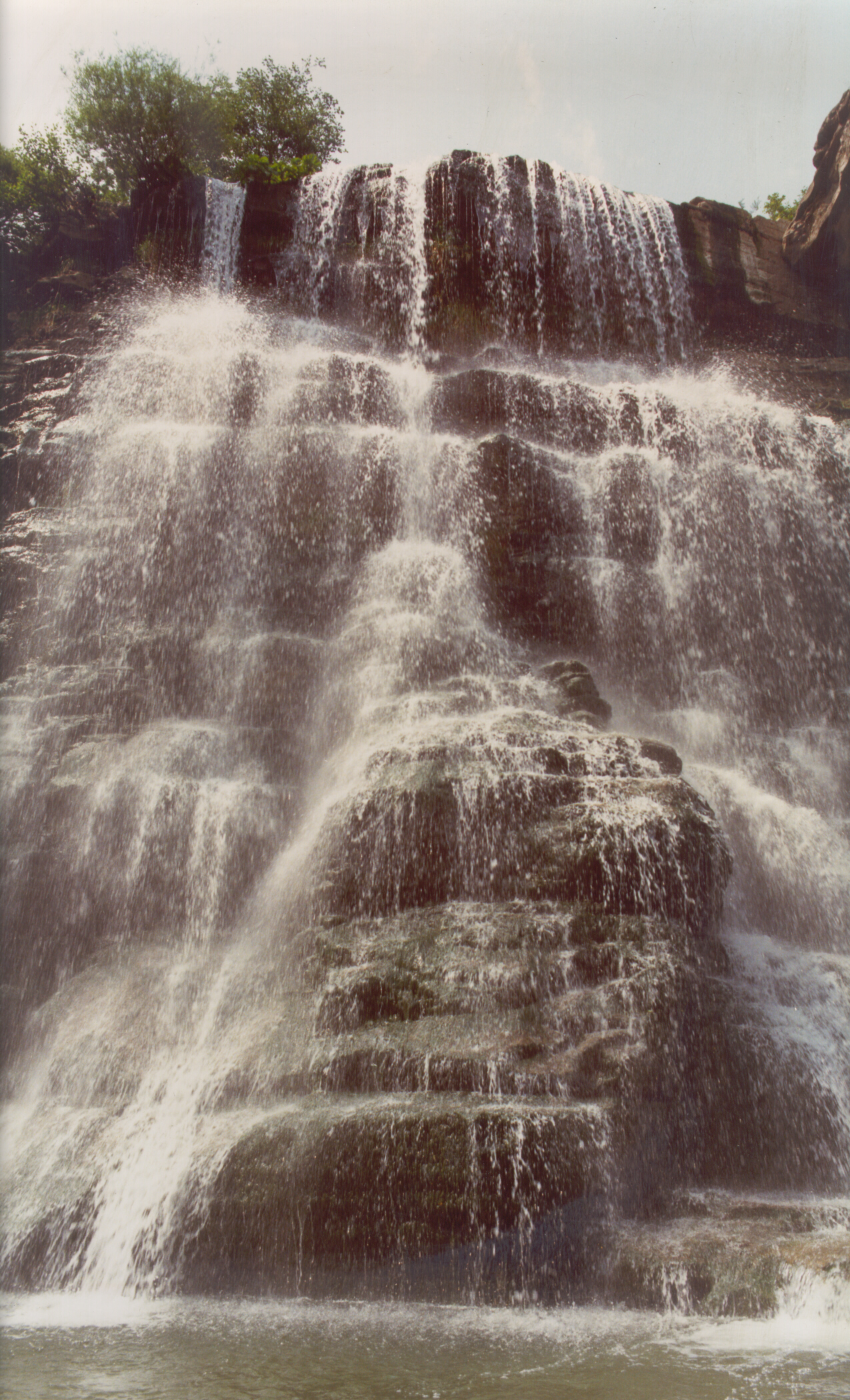 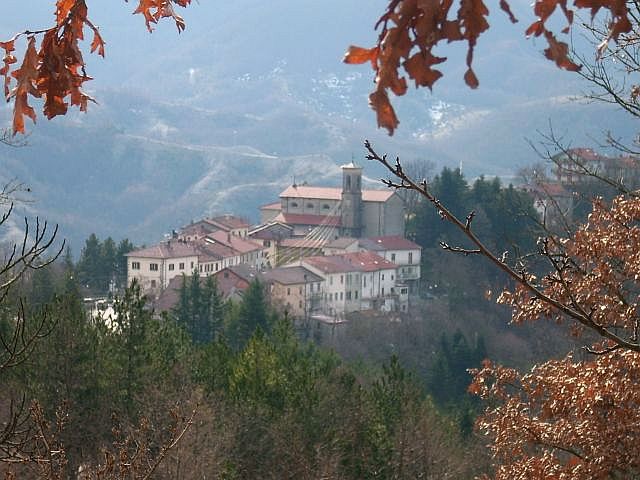 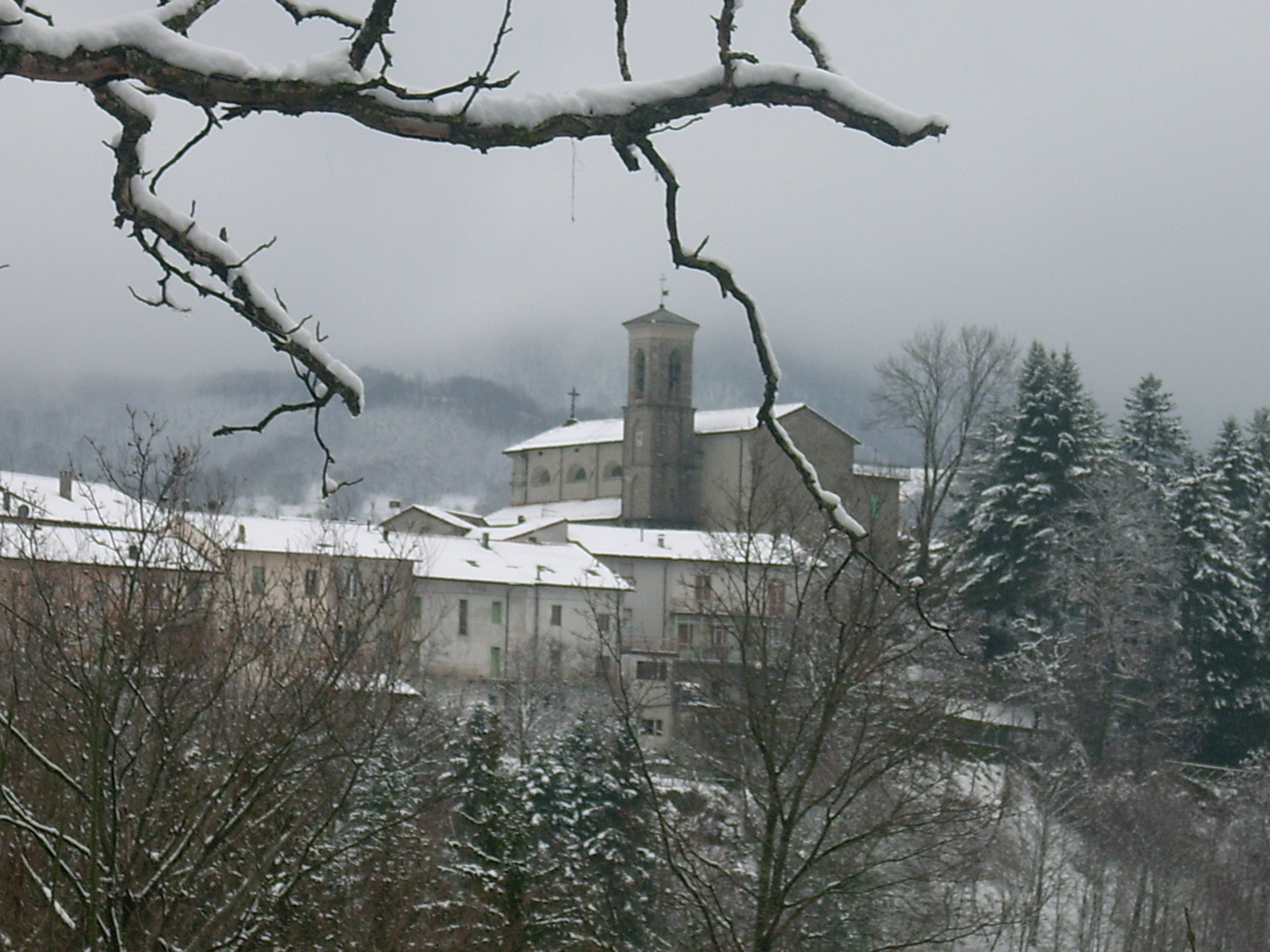 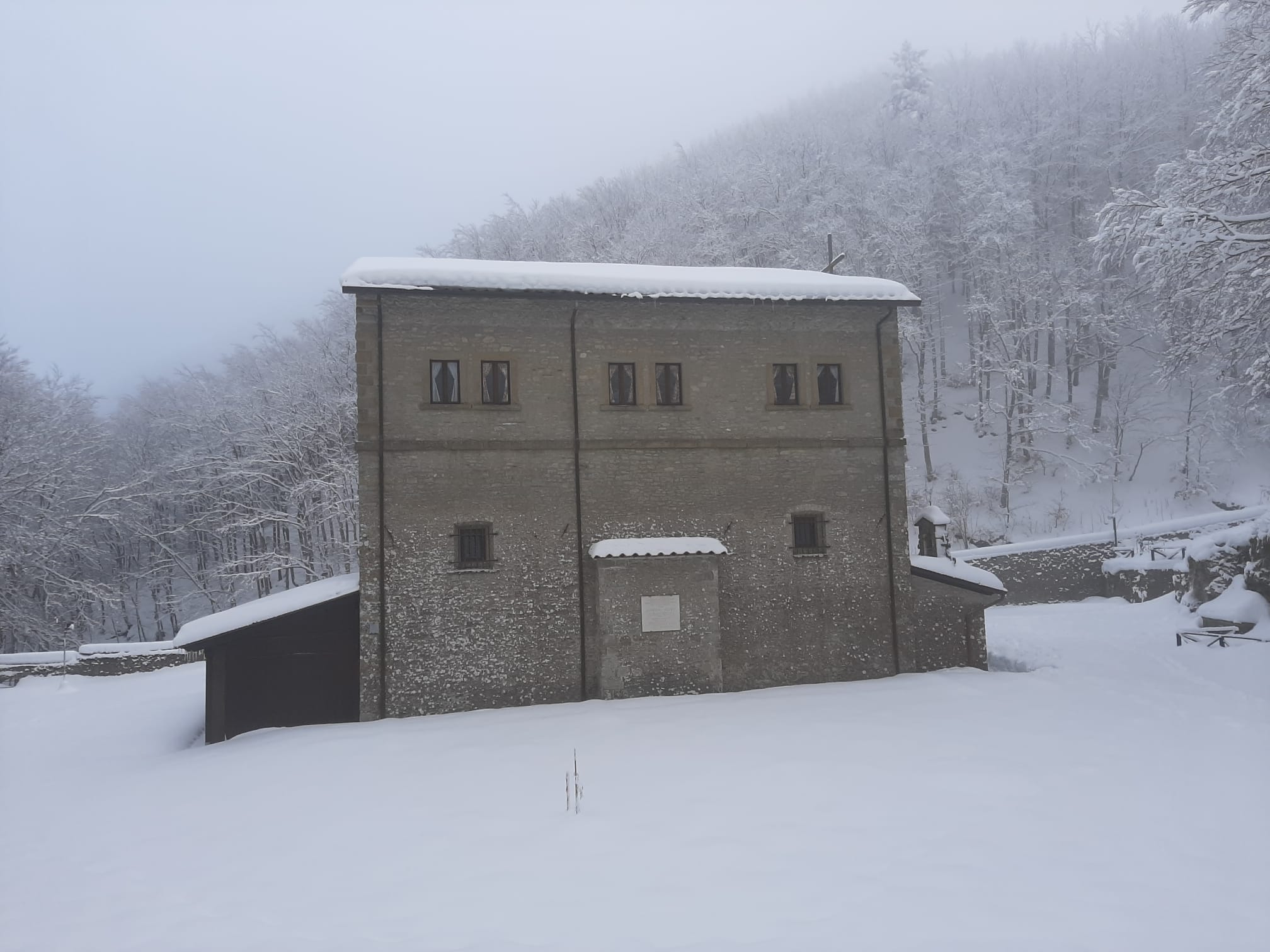 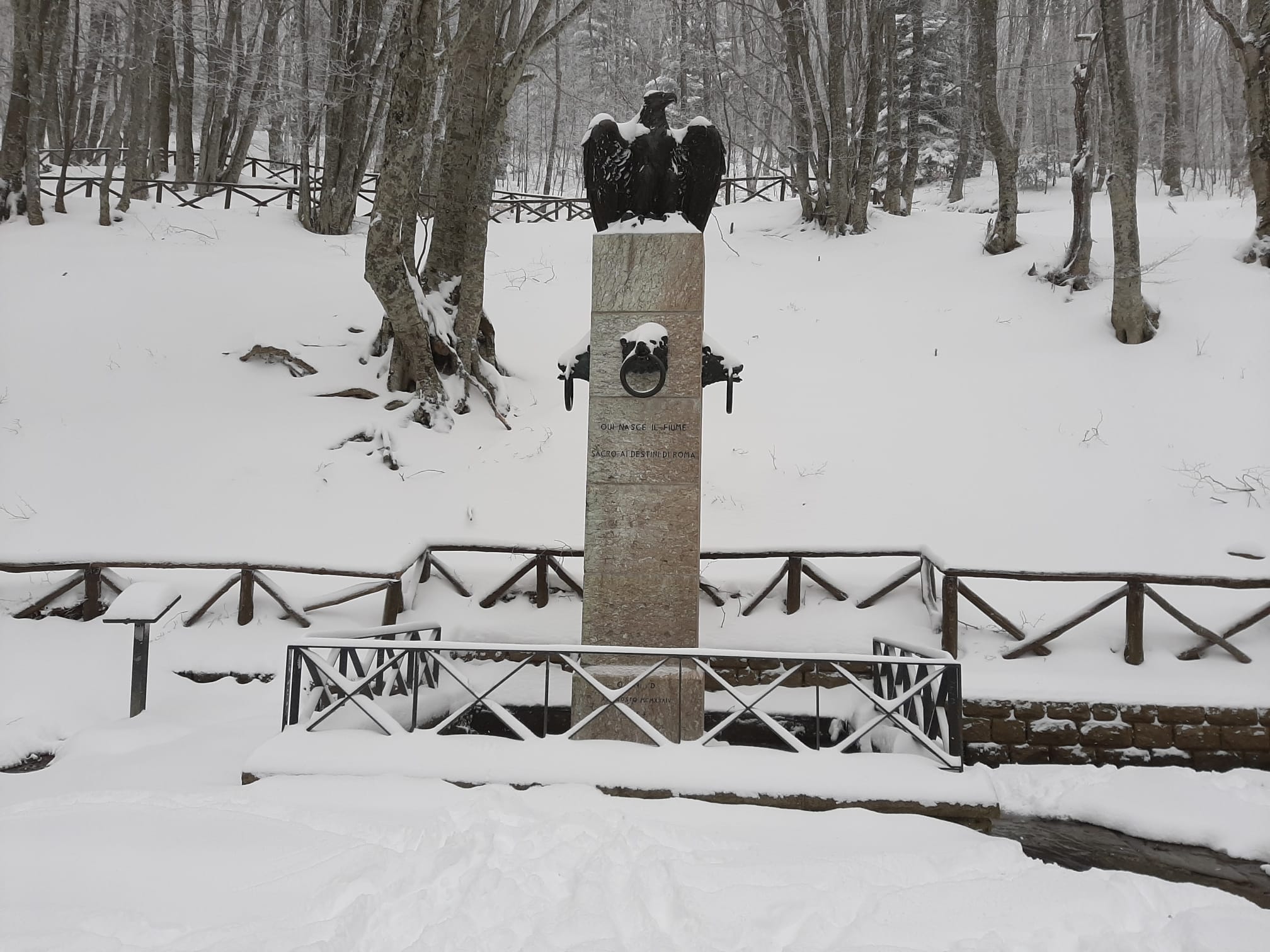