Santa Sofia is the last town in the Bidente Valley, between the hills and the Apennines.
The town is of medieval origin. According to historical sources, there were two castles and consequently two settlements: Mortano, on the right of the Bidente river, and Santa Sofia, on the left bank. From the 15th century on, the two centres were divided: Santa Sofia came under the control of the Florentine Republic, while Mortano found itself a fief of the Malatesta family and was later subject to the Papal State. This administrative division was preserved over the centuries and stayed in place even after the annexation to the Kingdom of Italy, with the municipality of Mortano in the province of Forlì and that of Santa Sofia in the province of Florence. Reunification took place in 1923, when the whole of Tuscan Romagna came under the administrative control of Forlì.
Its proximity to Tuscany has always influenced the Romagna traditions and habits, from art to gastronomy. Today the town has not lost sight of its traditions while looking to the future. It is home to important events related to art and culture — from the Campigna Prize to the International Festival of Performing arts. In addition, it is part of the Città Slow network thanks to its gastronomic specialties that underline its vocation for tourism and tradition of a harmonious and sustainable lifestyle.
From a naturalistic point of view, a large part of the municipal territory is located in the National Park of Foreste Casentinesi, Monte Falterona and Campigna, an ideal destination for lovers of nature and the outdoors in all seasons: the fir woods of Campigna, the meadows of Burraia and the remains of the mountain villages of San Paolo in Alpe or Pian del Grado are just a few examples of the countless destinations that can be reached by hikers. Finally, the artificial lake of Ridracoli, created by the construction of the Ridracoli dam and now a site of considerable natural interest, is extremely fascinating. 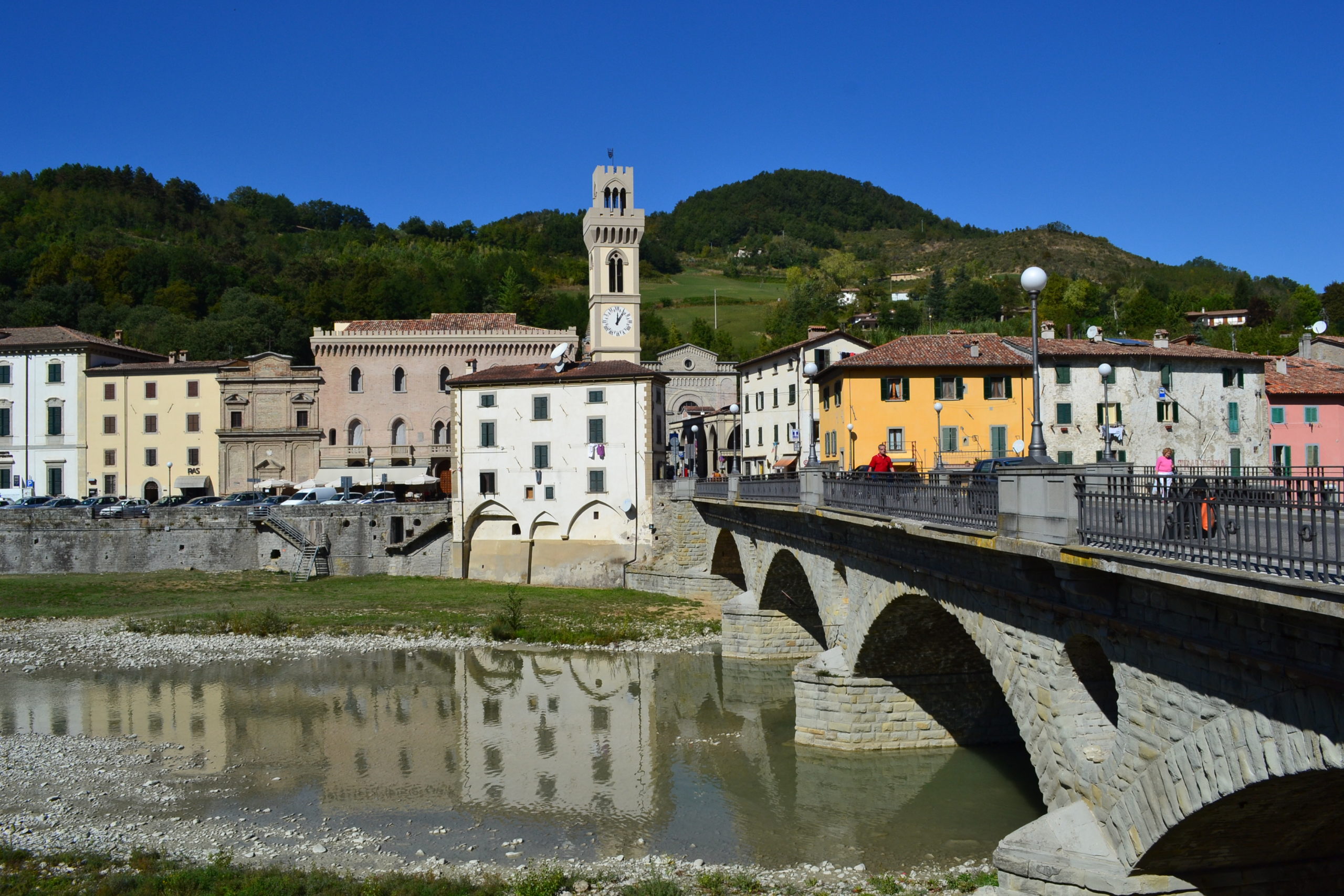 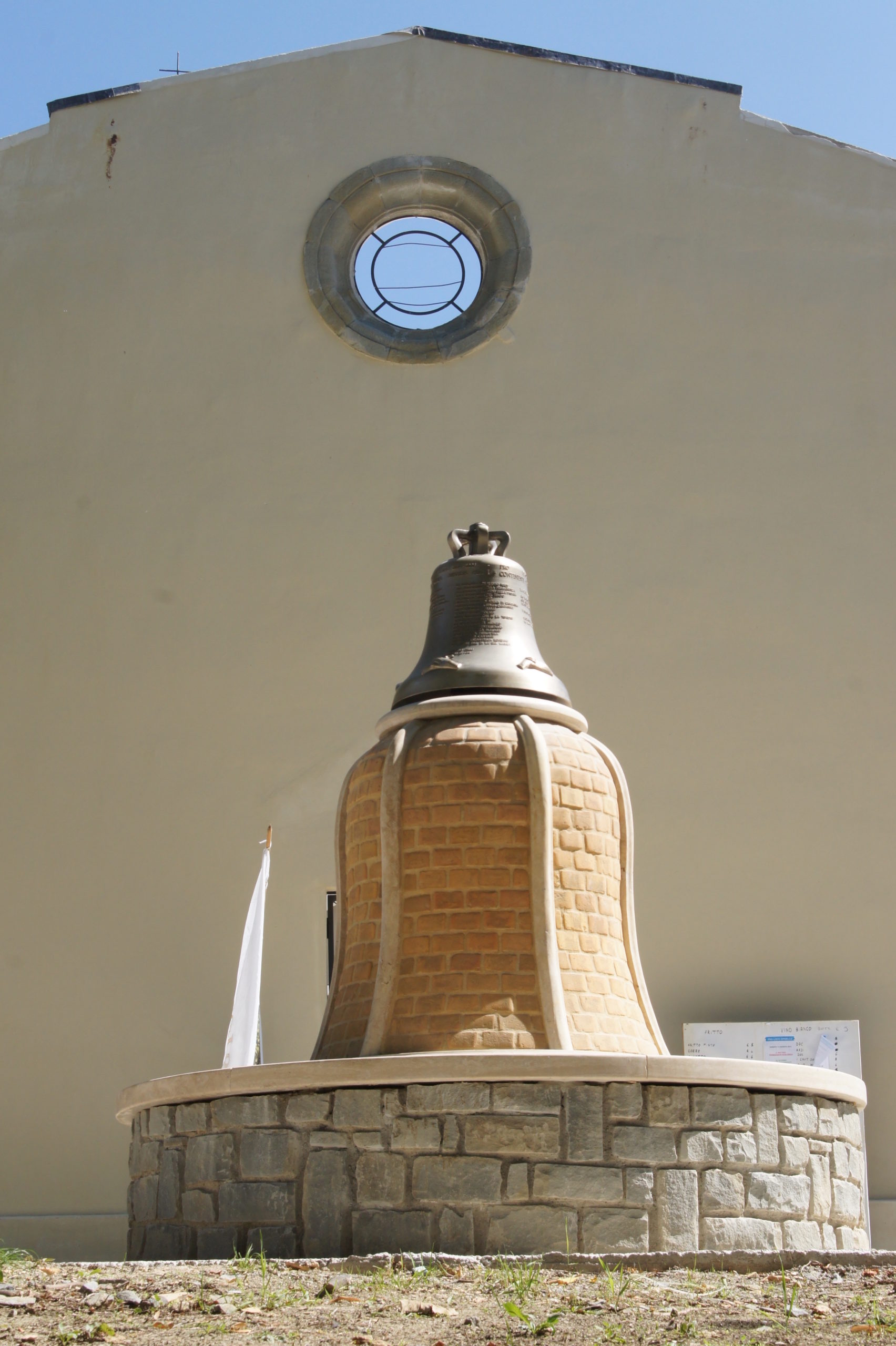 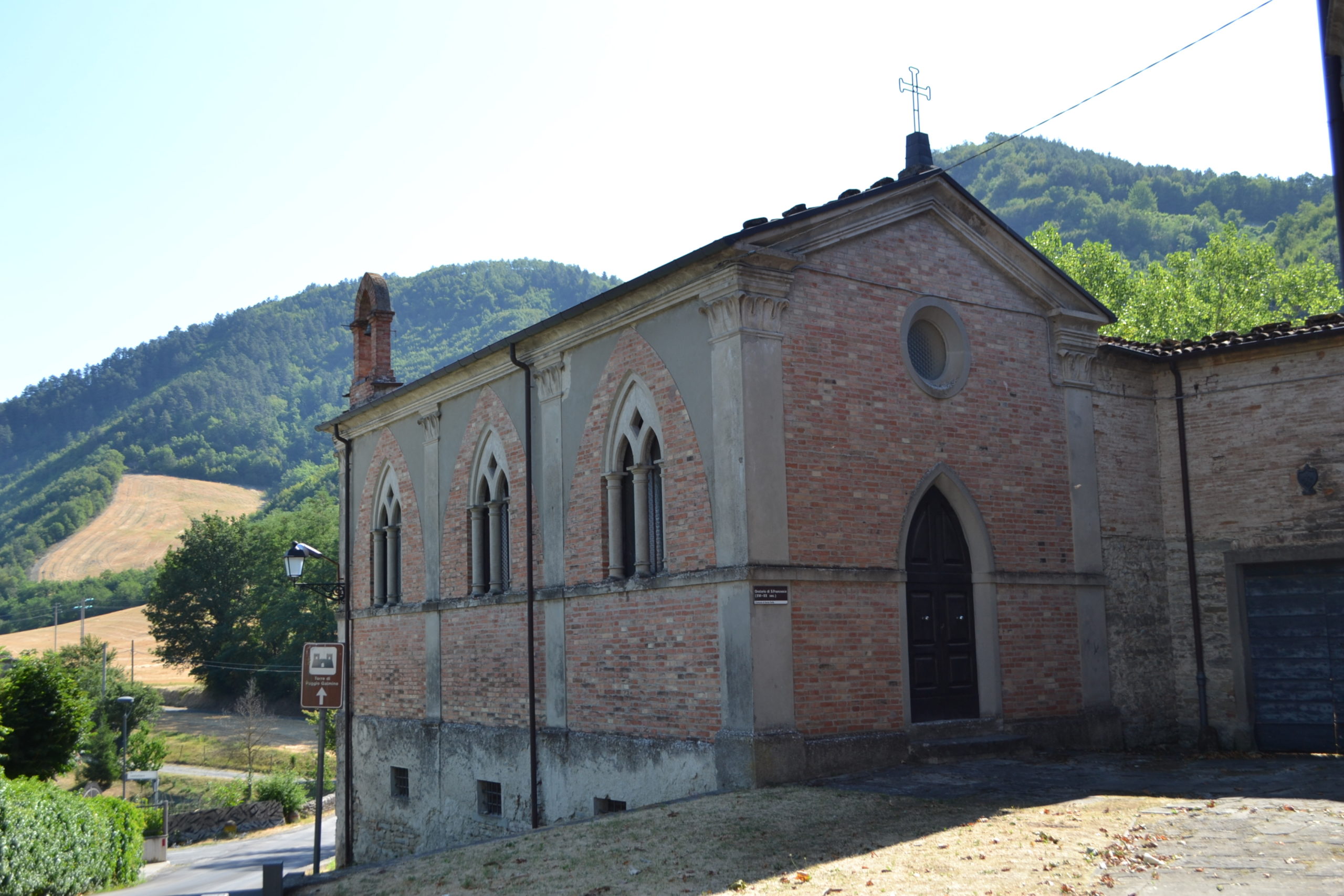 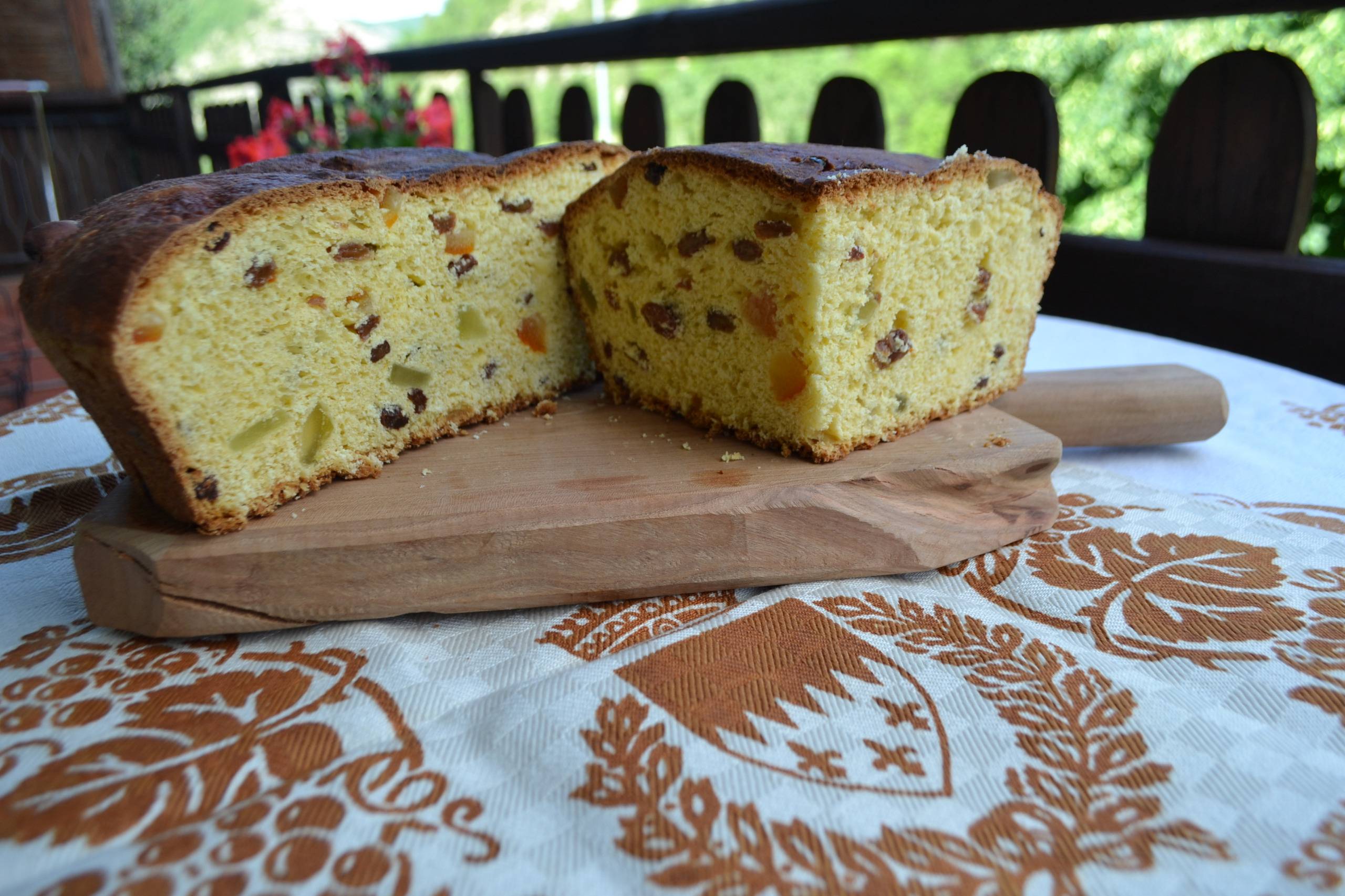 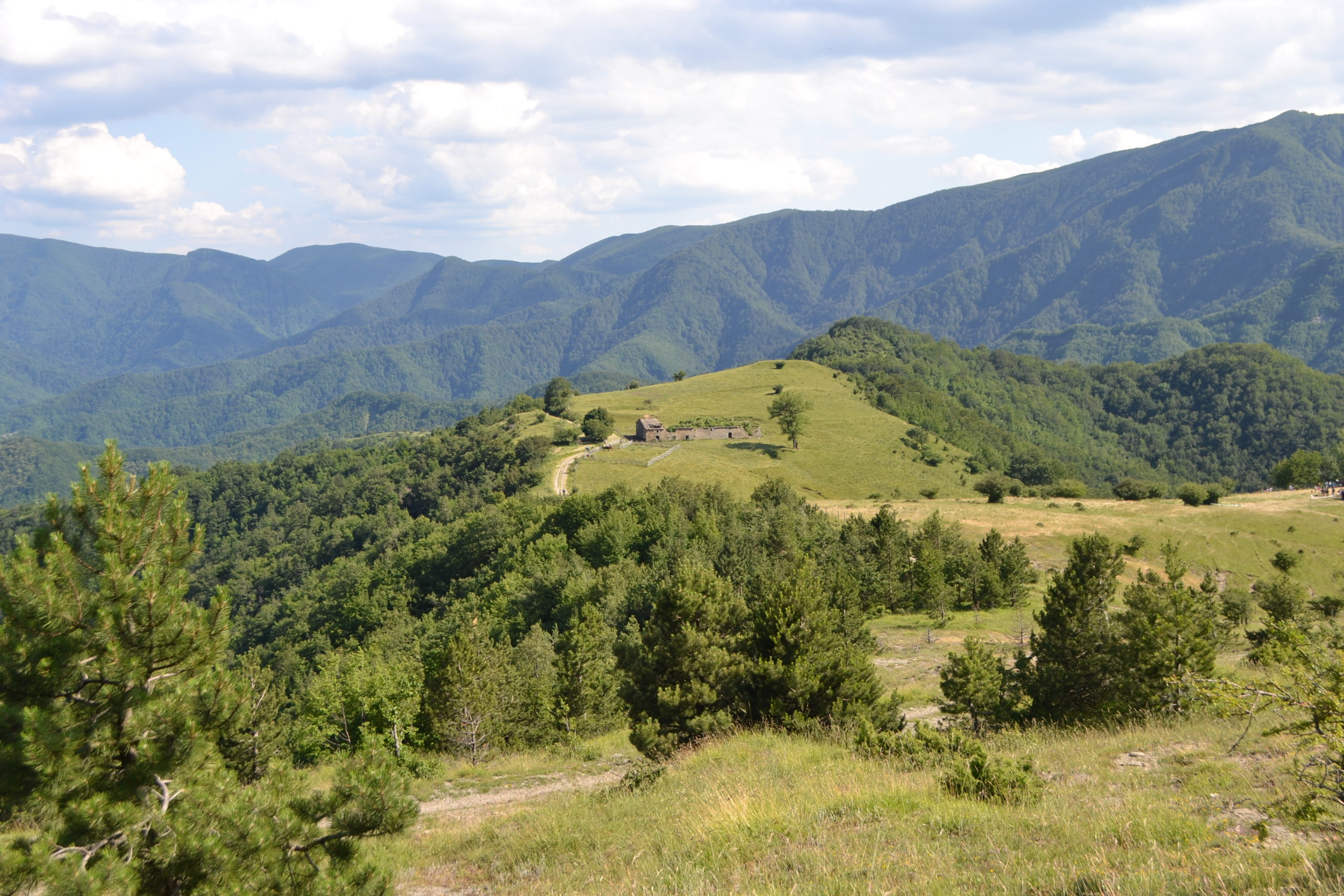 A pleasant walk allows you to visit all the corners of the town, originally built around a castle of which only a few traces remain today: the steep paved road leading from Piazza Gentili and the two surviving castle gates. The town’s lively centre is Piazza Matteotti, which overlooks the Bidente river and features some interesting religious and civic buildings: the Palazzo Giorgi (17th century) with its beautiful Parco della Resistenza extending to the rear of the building and the Town Hall (the former home of the Crisolini-Malatesta family) with its civic tower. Among these, the Oratory of Santissimo Crocifisso, was rebuilt after the 1918-19 earthquakes and contains a 15th-century crucifix and a Deposition by the Florentine Giuseppe Bezzuoli (first half of the 19th century).
A short walk from Piazza Matteotti is the church of Santa Lucia, in Piazza Montini. The first building dates back to the middle of the 16th century, by the Hospital of Santa Maria Nuova in Florence, which wanted to construct it along with a small hospital. Its present location is not on the site of the original: the building was moved a few tens of metres uphill and the carriage road was built on the site of the church in 1835.
On the other side of the river is the Mortano district, which until 1923 was a separate municipality. Here it is possible to admire the massive Palazzo Bianchini Mortani, dating from between the 16th and 17th centuries, and the church of San Francesco d’Assisi in Florentine Gothic architecture, both owned by the Mortani family.
In the centre of the small Piazza Garibaldi is the Mentore Theatre: a contemporary building, designed by architect Gae Aulenti, it replaces an earlier building that has been remodelled several times following earthquake and war damage.
Thanks to the “A Spasso” project, it is possible to discover interesting facts about all the districts and historical buildings in Santa Sofia guided by panels, printed material and interactive maps.

Contemporary art is at home in Santa Sofia, home of the Campigna Prize since 1955.
Since 1990 the “Vero Stoppioni” Contemporary Art Gallery in Viale Roma has been hosting the works collected during various editions of the Campigna Prize.
The most interesting Italian artistic trends from the 1950s to the present day are on display inside the Gallery and a special place is dedicated to Mattia Moreni, who participated in several editions of the Campigna Prize and established a close relationship with Santa Sofia by staying there for long periods.
As part of the Campigna Prize, the Open Air Sculpture Park was created in 1993, where the works are integrated with the landscape and with the history of the area, creating a direct dialogue between art and the environment. Today, the park houses 13 large sculptures located on a pedestrian path that runs from the centre of Santa Sofia. The “open-air museum” is constantly evolving through the installation of new works of art and partly follows the route of the River Park which, from Santa Sofia, leads to Capaccio along the clear waters of the Bidente.

The entire territory of Santa Sofia contains hidden gems to be admired.
In addition to the natural beauty of the National Park of Foreste Casentinesi, Monte Falterona and Campigna and the fascinating combination of nature and ingenuity offered by the Ridracoli Dam, there are many small villages to discover. The main villages are Corniolo and Spinello. The first is a small village that looks like a nativity scene with stone houses and two beautiful churches: the church of San Pietro, which houses prestigious works from the workshop of Giovanni della Robbia and Giulio Ponteghini dating back to the 16th century and the Oratory of the Madonna delle Grazie, with interesting 15th-16th century frescoes and colourful late Baroque decorations. Not far away, the ancient ruins of the Corniolino castle overlook the Bidente valley.
Spinello, on the other hand, offers sweeping views from its position 850 metres up, while a stroll will take you to the church of Santa Maria in Equis, which partially collapsed due to the earthquakes, and “Il giardino dei Pensieri solidi” (The Garden of Solid Thoughts), an original sculpture museum with works by Italian and foreign artists, such as the “Campana della poesia” (The Poetry Bell).
Other villages include Collina di Pondo with its sanctuary of the Madonna degli Occhi, Isola and the church of Santa Maria in Cosmedin, Biserno and Camposonaldo, which are starting points for numerous hiking trails.

Slow Food products and local specialties to be enjoyed at specific times of the year: these are the culinary delights of Santa Sofia, produced by local farms and present on restaurant tables.
There is Raviggiolo, a cheese to be eaten fresh, with a delicate flavour obtained by making cheese from raw cow’s milk without breaking the curd and then drained on fern leaves. There is the tortello alla lastra, made of a thin sheet of water and flour, stuffed inside with a tasty pumpkin and potato or wild herb filling, traditionally cooked on a sandstone slab. There are the delights of the undergrowth: mushrooms (porcini and blackthorn in particular), delicious fruits such as raspberries, blackberries, blueberries, strawberries, the forgotten flavours of cornelian cherries, volpina pears, quince, medlars and jujubes.
Meat lovers can enjoy dishes based on the Razza Bovina Romagnola breed of cattle or products made from pork: cracklings, “matta” (“mad”) or ciavàr sausages (which contain offal and less noble parts, flavoured with garlic and Sangiovese), bacon and much more…
Typical of Easter, however, is the Panina, a cake enriched with sultanas and candied fruit, which requires skilful preparation and a long rising time.

SCULPTURE PARK
An admirable union of art and nature is the Open Air Sculpture Park, where the works of art are integrated with the landscape and with the history of the area, creating a direct dialogue between art and the environment.
The sculptures by well-known artists are placed along a pedestrian path that winds from the centre of Santa Sofia, starting from the Parco della Resistenza and then descending into the Bidente riverbed. The “open-air museum” is constantly evolving through the installation of new works and partly follows the River Path that, from Santa Sofia, allows you to reach Capaccio along the Bidente river.
The Sculpture Park route begins in the Parco della Resistenza, located in the historic centre of Santa Sofia, where Mauro Staccioli’s work “Santa Sofia ’93” is located in the upper part of the park, which is where Hidetoshi Nagasawa’s work “Sotto l’albero del ginkgo” (Under the Gingko Tree) will be buried. Leaving the park, turn left, crossing Piazza Matteotti and walking along the river. You will find yourself in front of the side wall of a building where “VIA”, Chiara Pergola’s broken mirror, is situated. From this point, use a metal ladder to descend into the bed of the Bidente river. Continuing southwards, you can admire in succession the artistic contributions of Anne and Patrick Poirier (“The Exile of Ulysses”), Giulio De Mitri (“Il giardino di Psyché”) and, after the Milleluci room (a former dance hall in the river bed), “SUF”, the wooden bench-sculpture by Cuoghi Corsello. The bronze “Nido” by Giuseppe Maraniello and “Black Avorio”, the tower of wrought iron gates by Flavio Favelli, are also located nearby. Continuing along the path, you will reach a plateau on the Bidente, where you can find monumental installations by Eliseo Mattiacci (“Vie del cielo”), Nicola Carrino (“Costruttivo 96”), Luigi Mainolfi (“Prima casa”). The work “Cono tronco” by Arnaldo Pomodoro was installed here in 2020. Continuing further, it is possible to reach the Capaccio fountain with its two columns by Francesco Somaini.

“VERO STOPPIONI” CONTEMPORARY ART GALLERY
In Viale Roma is the “Vero Stoppioni” Contemporary Art Gallery, inaugurated in 1990 to host the works collected during various editions of the Campigna Prize, the first of which dates back to 1955.
It is housed in an early 20th century building and has an exhibition space where contemporary works manage to dialogue effectively and harmoniously with the architecture and lines of the interior spaces, imparting an impression of modernity to the visitor.
The most interesting Italian artistic trends from the 1950s to the present day are represented within the museum: neorealism, informalism, pop art, abstractionism, new figuration, up to the most recent trends. The collection boasts paintings and sculptures by renowned artists, such as Mattia Moreni, Piero Ruggeri, Francesco Somaini, Pompilio Mandelli, Fabrizio Plessi, Giannetto Fieschi, Sergio Vacchi, Alberto Sughi, Eugène Berman and Giovanni Korompay, just to name a few, together with works by painters from the Romagna area (Bellini, Casadei, Crispini, Greggi). A special place inside the Gallery is dedicated to Mattia Moreni; in fact, one section displays the works created by the artist, who participated in various editions of the Campigna Prize and established a close relationship with Santa Sofia by staying there for long periods. Stoppioni’s works are mainly part of the “regression of the species and fine arts” series, including five large self-portraits. The exhibition space is dominated by the large “Mistura” (1976-1984), consisting of a convex part with materials glued and deformed through the use of a glue used for aircraft, araldite, and a concave part in which “Narciso” or “Mister Chimica”, a half-bust cast of the artist himself, stands majestic and severe. 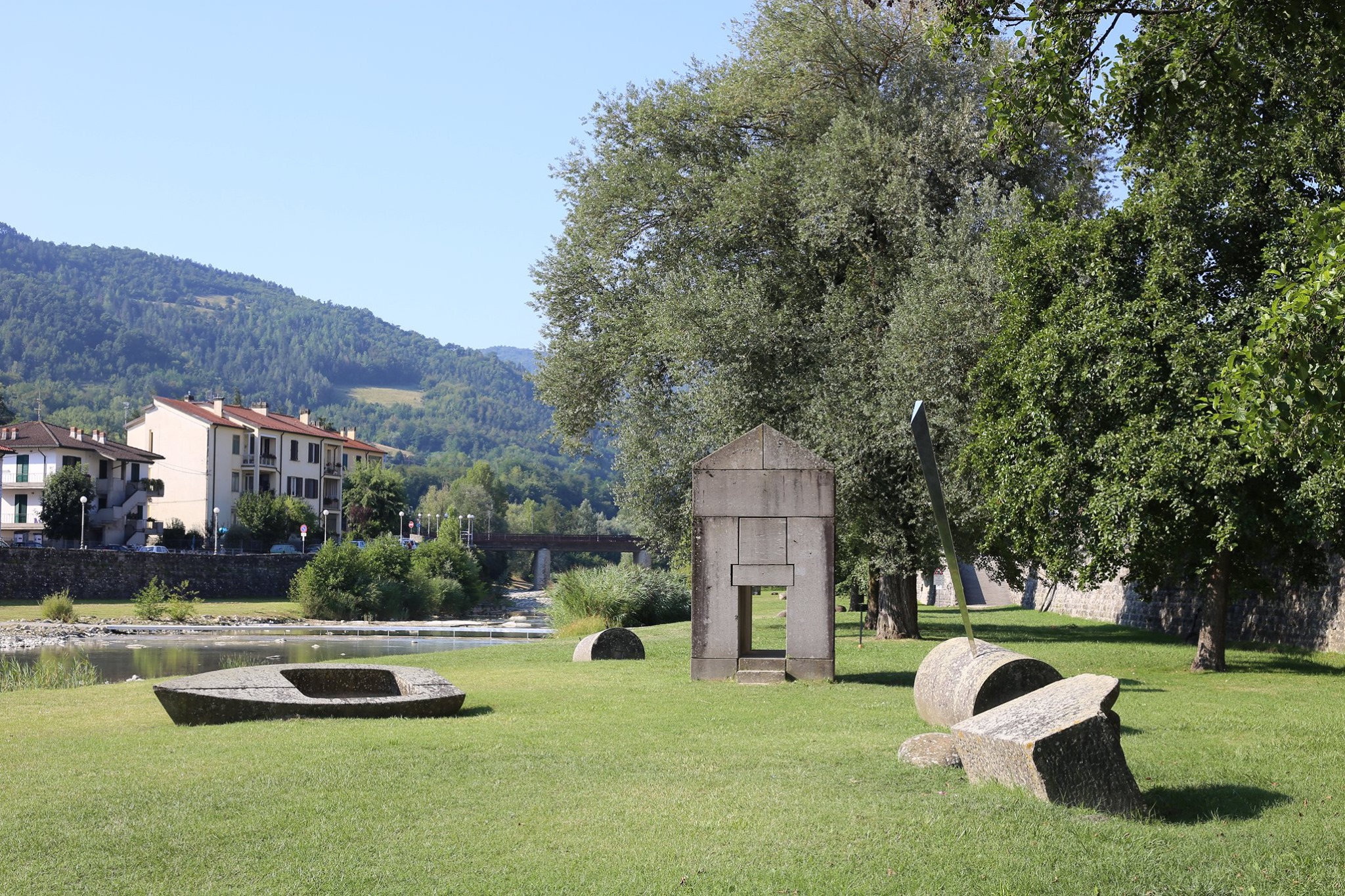 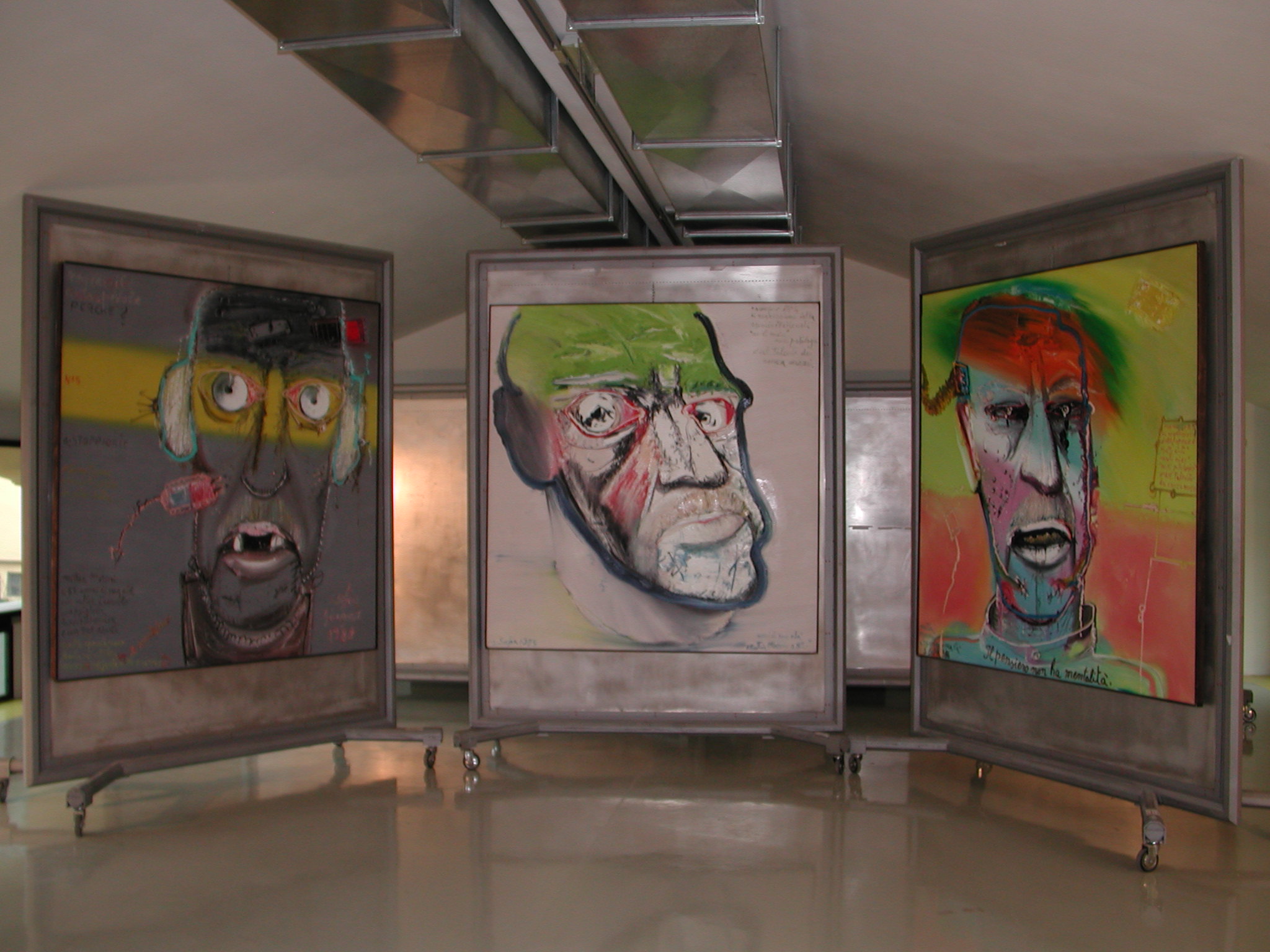 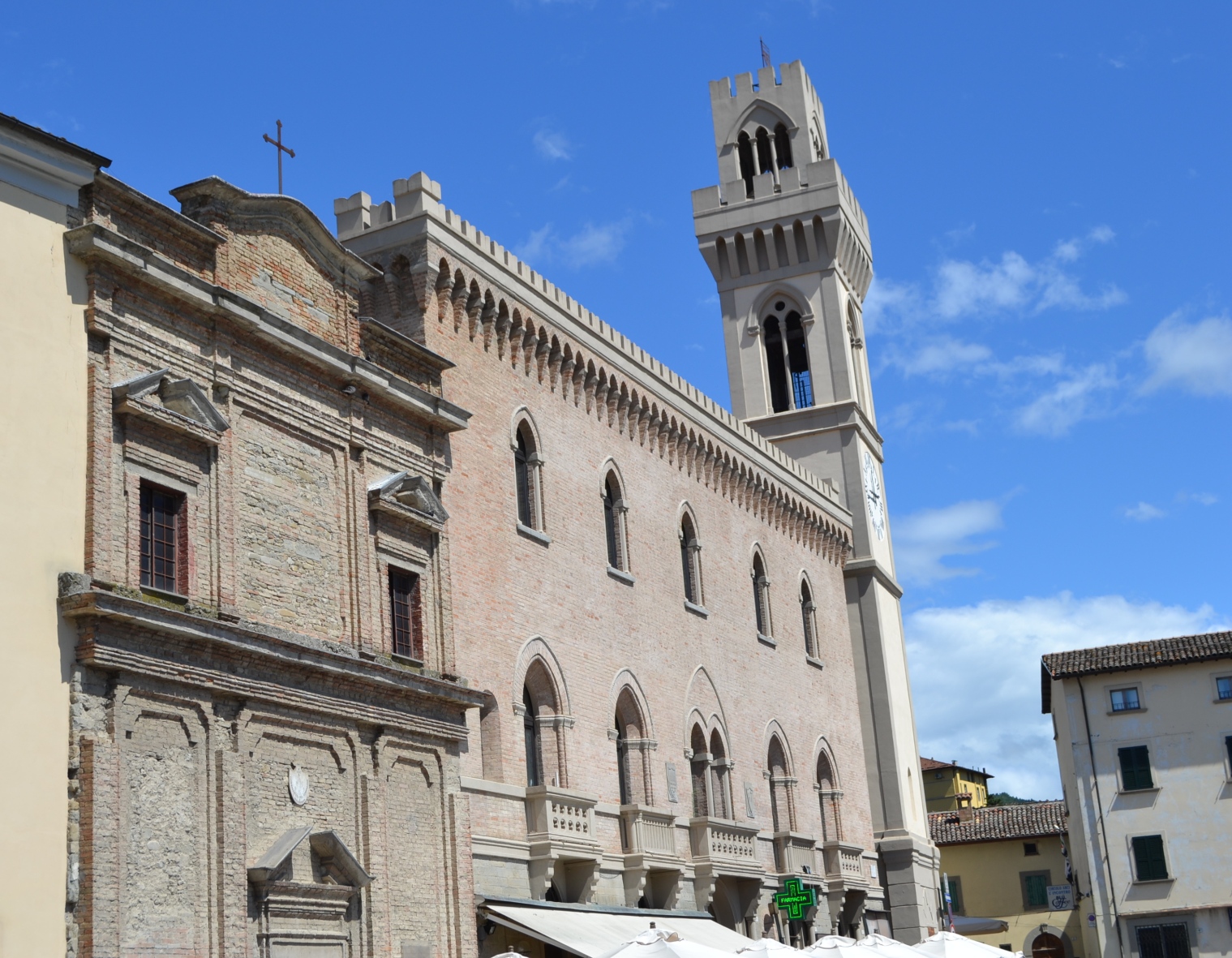 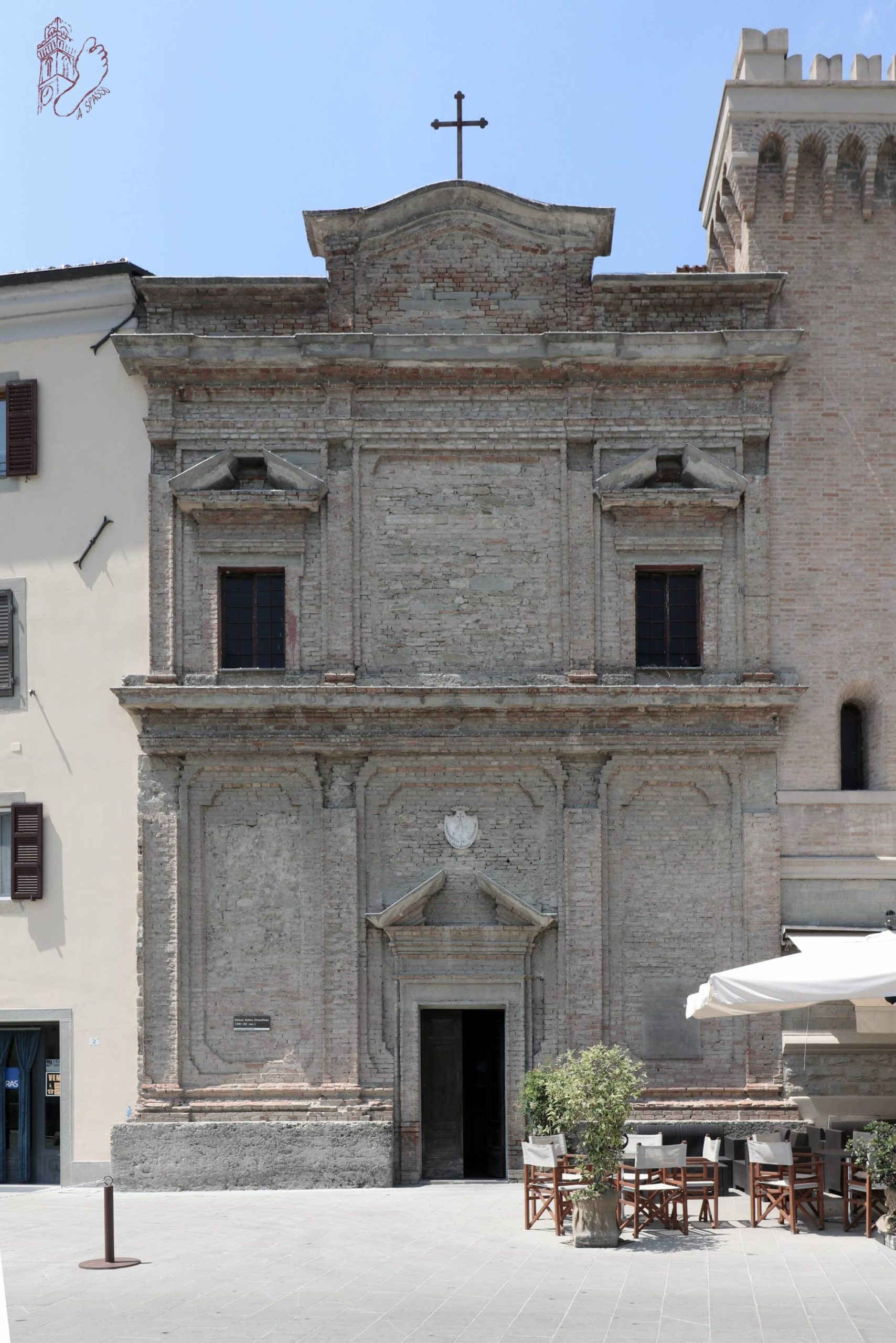 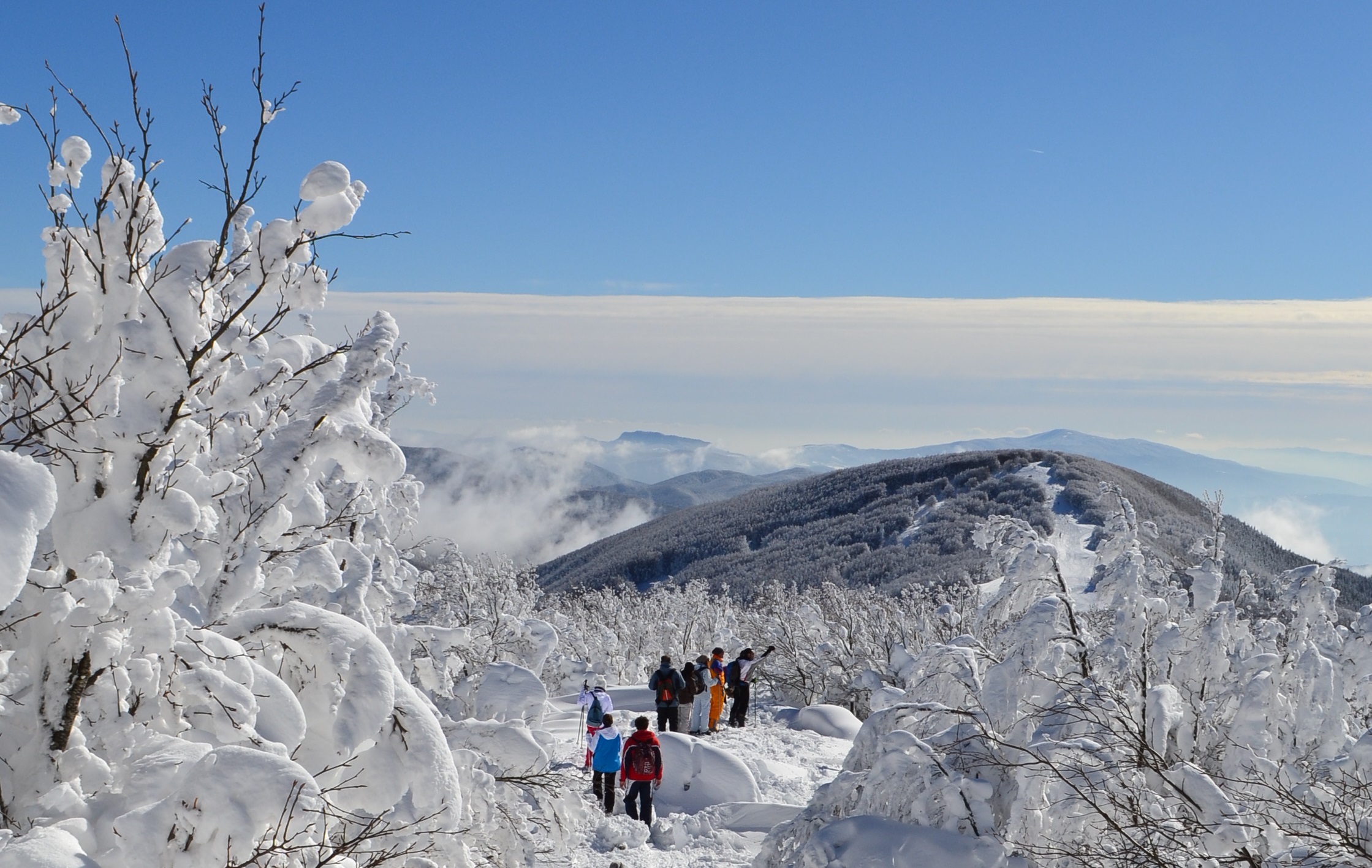