Rocca San Casciano is a small village located in the Montone valley, a valley which was known to Dante at the time as the Acquacheta valley. From a landscape point of view, the town is surrounded by numerous hills that offer magnificent views of the inland valleys, the Apennine ridge and, on clear days, the sea. The parish church of San Casciano was founded in the year 882, but the first document attesting to the existence of this town dates back to 1197 and bears the description “Rocca Sancti Cassiani in Casatico”. The first part of the name suggests the existence of a castle, probably the Castellaccio, while the second part invokes the name of its patron saint. According to legend, the fortress was built on the site of the ancient Urbe Sassatica, an Etruscan or Roman city destroyed during the barbarian invasions. Owned by the Abbots of San Benedetto in Alpe, the Traversari family of Ravenna and the Guidi Counts of Modigliana, in the second half of the 14th century it was part of the assets bequeathed to the Municipality of Florence by a member of the noble Calboli family. Thus an indissoluble bond with the Tuscan city was born, which lasted, with the exception of the period 1424-1440, until the year 1923, when the territories of Tuscan Romagna became part of the province of Forlì. The town experienced its period of greatest expansion after the Napoleonic interlude thanks to the establishment of the Court of First Instance (1837), the Sub-Prefecture, the Prisons and other important administrative offices, and continued, after the Unification of Italy, with the elevation of the town to the seat of the district of the same name, which was abolished in 1926. 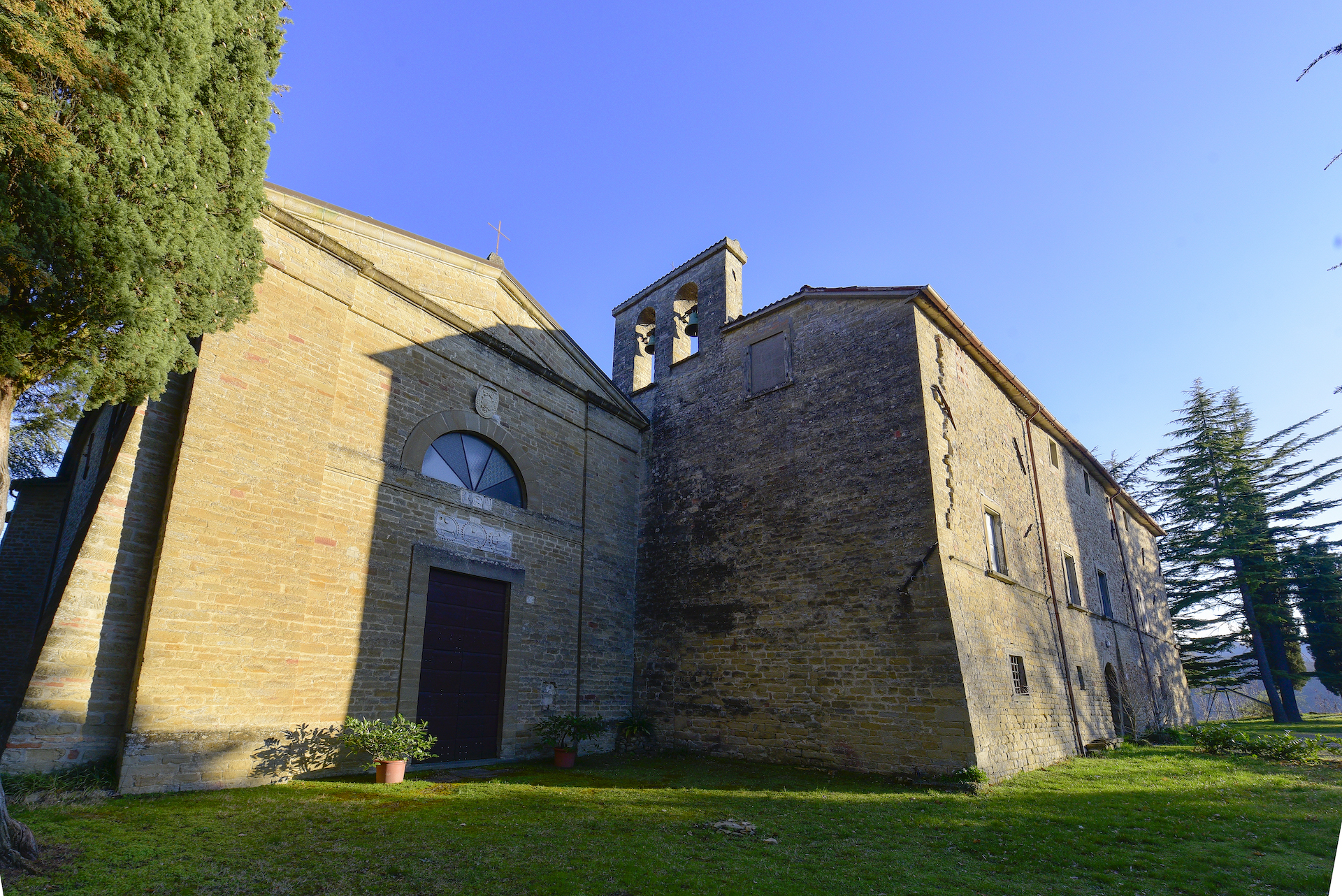 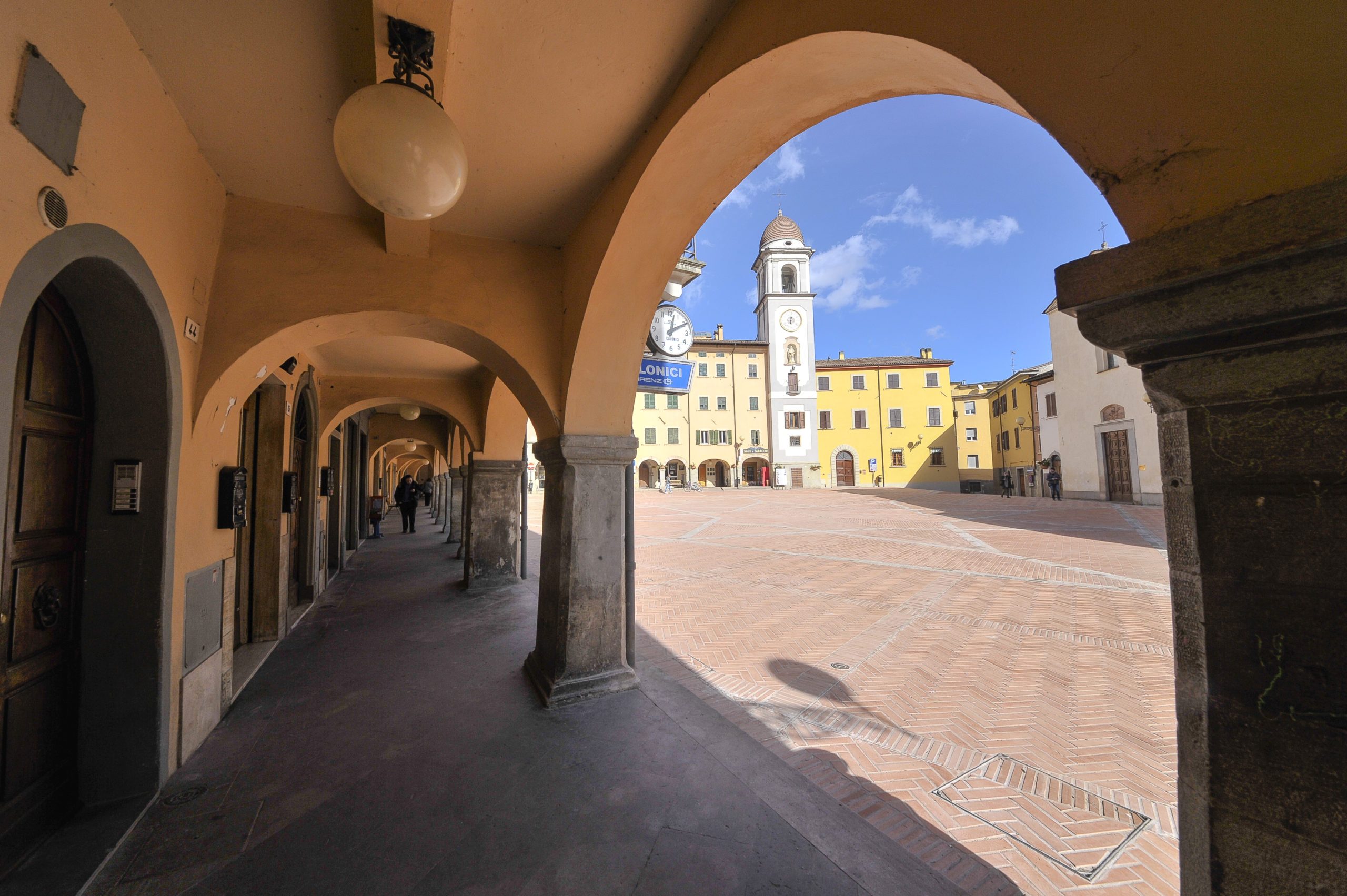 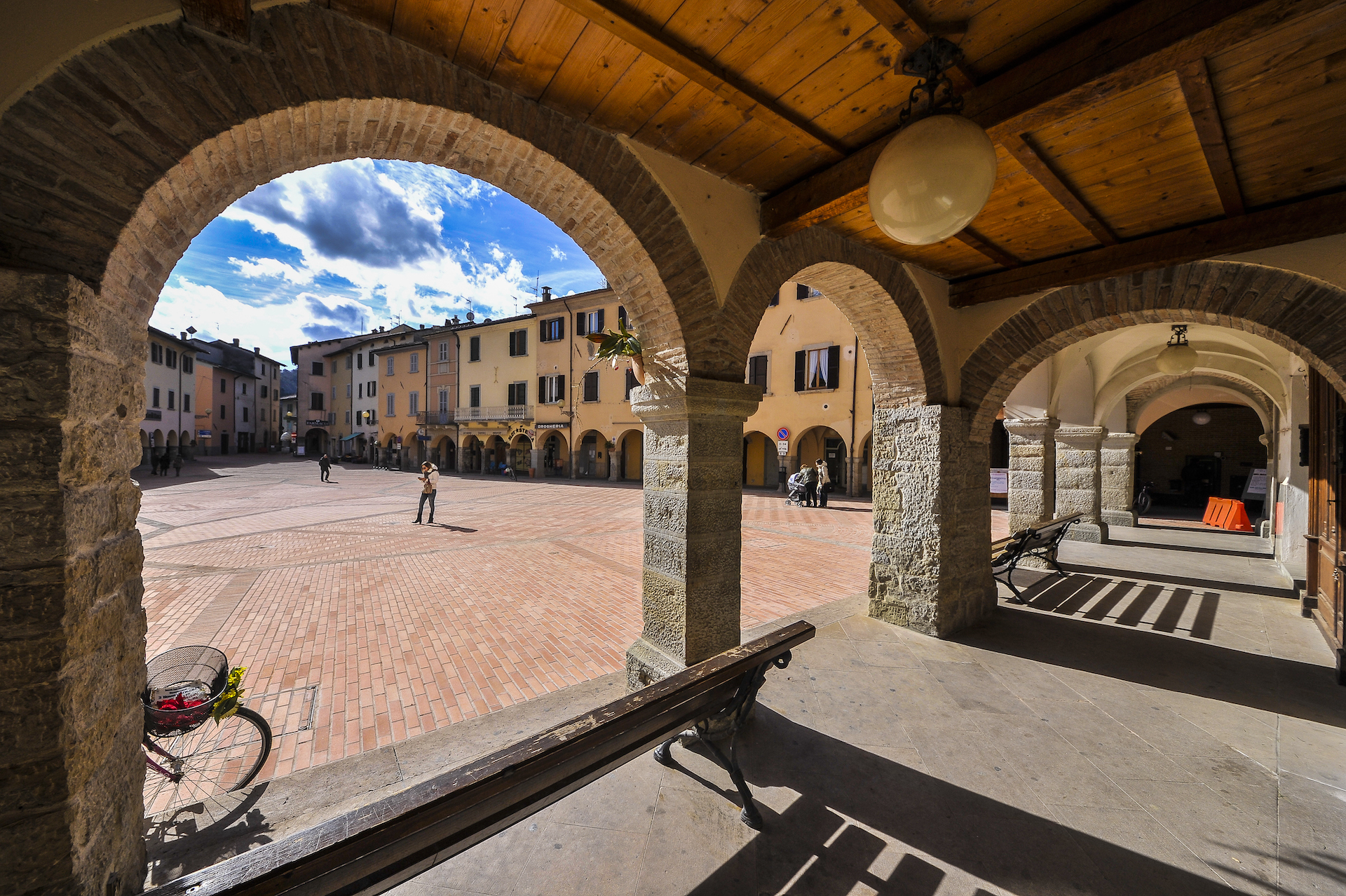 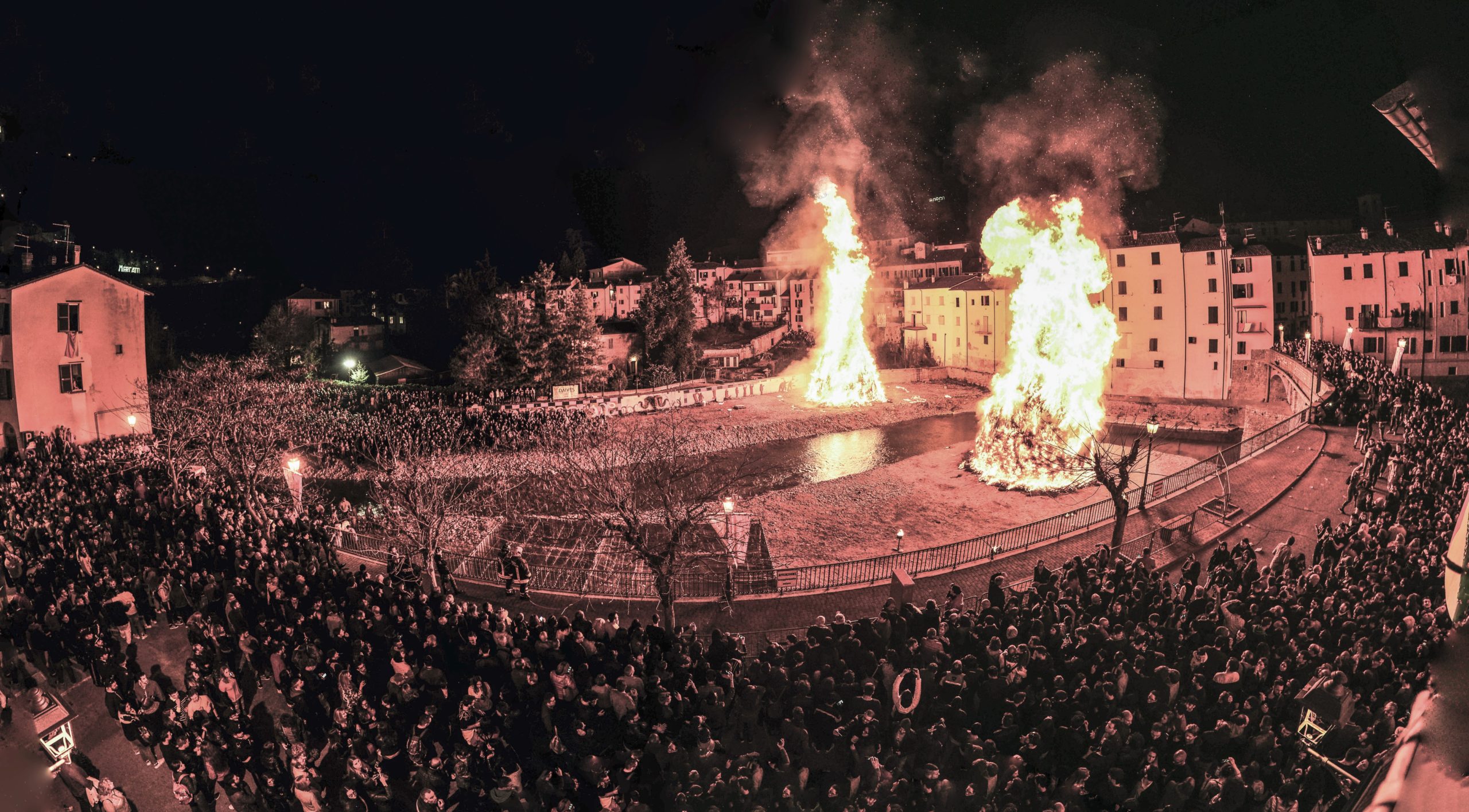 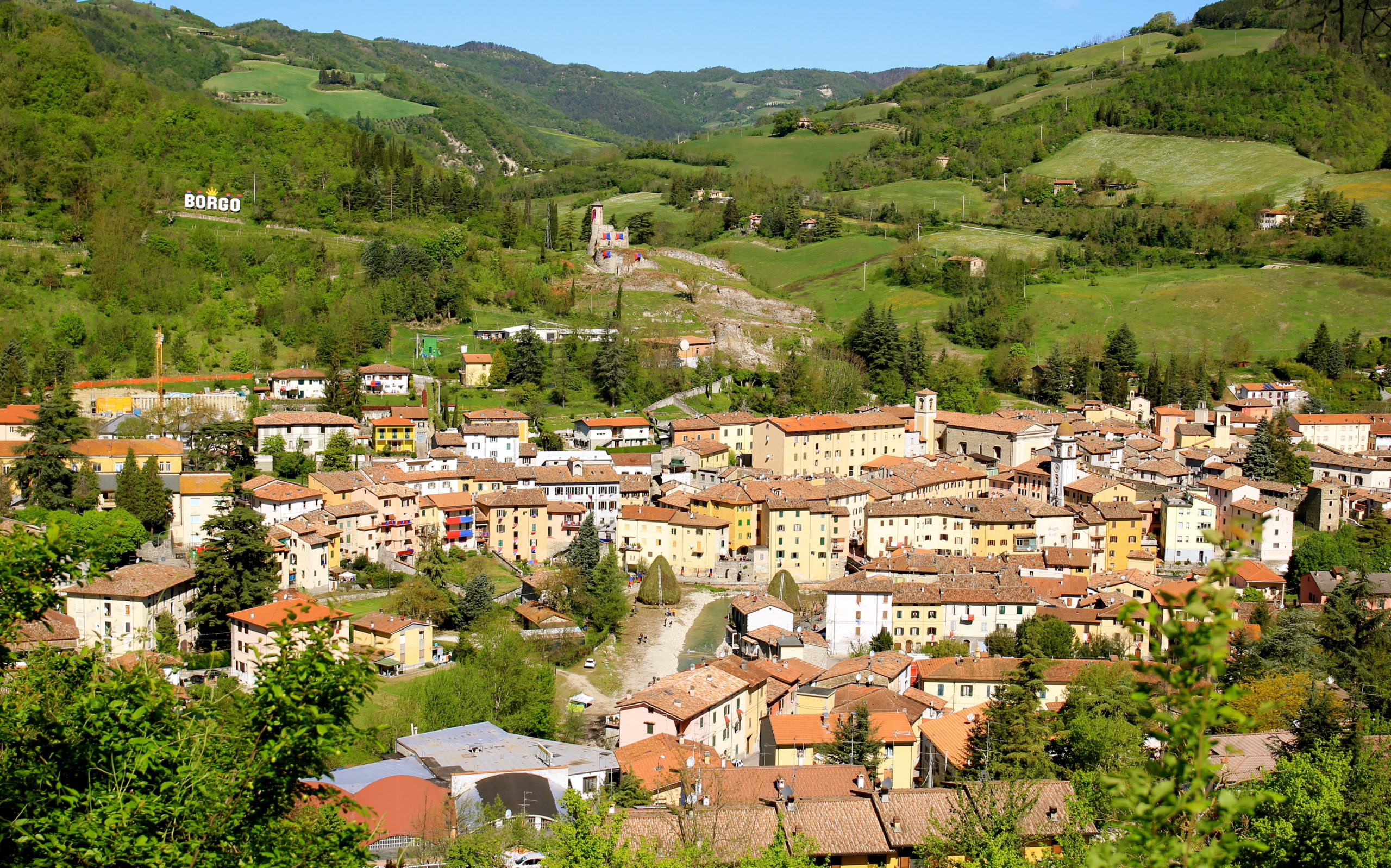 A medieval layout, triangular in shape, it dates back to 1200 and is positioned as if intentionally halfway between the two villages. Its sides feature porticoes with columns of chiselled stone, which were once used to accommodate the crowds that gathered at markets and fairs. The 17th-century Torre Civica (Municipal Tower) overlooks the square, housing a clock set in ceramic and the enamelled terracotta statue of Our Lady of Sorrows, whose heart is pierced by a sword and who seems to be crying because of the earthquake that struck the town in 1661. At the base of the Tower you can visit the old “Sgalì” shoemaker’s workshop to admire the tools used by the “ciabattino” (cobbler).

Built to commemorate the victims of the 1661 earthquake, this church was the seat of Confraternity of the Holy Stigmata and of the Misericordia. On the façade, there is a terracotta decoration depicting a boat in the stormy sea with Christ waiting on the shore and the Castellaccio in the background, as well as a stained glass window depicting San Cassiano. In modern times, it has become an exhibition venue for numerous works of art owned by the Parish, among which can be found: a glazed terracotta tondo attributed to Andrea della Robbia depicting “Madonna in Adoration of the Child, St. John and a Choir of Angels”, and the panel painting Trinity and Dead Christ (1564) by the Flemish painter Giovanni Stradano.

Church of Santa Maria in Lacrime

Built at the behest of the parish priest Ambrogio Tassinari, this church was completed in 1784 thanks to the efforts of masons and stonemasons sent by Grand Duke Peter Leopold. The building has a sober façade, but inside there are many valuable works of art. In particular, there is a 16th-century painted terracotta bas-relief depicting the Madonna of Tears with Child. The image is believed to be miraculous after it wept for five hours on 17 January 1523. The 1661 earthquake left the image of the Virgin Mary unharmed on a wall that remained intact among the ruins of the old parish church, and it was later placed in its current location on 26 October 1784.

On the weekend after Easter, Rocca San Casciano holds the traditional Festa del Falò, which has its roots in the distant past. Along the banks of the Montone river, amidst fierce cheering from the Borgo and Mercato districts, majestic haystacks of gorse are burned. In the past, the preparation of these haystacks was dedicated to St. Joseph, so that he would encourage good harvests in spring. The festival’s symbol is fire, which unites, warms and strengthens community ties. The competition continues with impressive fireworks displays, or “Le Botte”, with parades of allegorical floats, and it ends with dancing in the square until late at night.

The area of Rocca San Casciano is dotted with numerous restaurants and farmhouses where you can rediscover the authentic flavours of Romagna cuisine. Traditional dishes that should not be missed out on are soups made with homemade pasts, such as tortelli and cappelletti, seasoned with ragù or mushrooms, as well as the Romagna piadina, fried piadina and tortello alla lastra.
The landscape of the area, which is mainly hilly, has fostered the development of many farms (most of which are family-run) which are dedicated to gastronomic excellence. This is the case with the Romagna cattle breed, recognised as the best and oldest Italian breed. It is protected by the IGP mark “Vitellone bianco dell’appennino centrale” and, since 2016, has been a Slow Food Presidium, attracting true connoisseurs with its entrecôte steaks. And more: dairy products such as cheese and sheep’s milk ricotta, extra virgin olive oil, Sangiovese wine, flour, native fruits and liqueurs. Chocolate and nougat lovers should not miss a visit to the Dolciaria Rocca, the first chocolate factory in Romagna, founded by Domenico Valentini in 1940.
For a genuine experience of sustainable tourism in contact with the most unspoilt nature, it is advisable to reach the agritourisms and farms using the hiking network known as the “Percorsi della Margherita” which can be covered on foot, by mountain bike or with e-bikes, which can be hired on site.
Finally, in the historic centre, there are still small, delightful craft shops that keep certain trades alive such as dairies, dressmakers, goldsmiths, straw chair makers and restorers of antique furniture. A section of the permanent exhibition on rural and hunting traditions is dedicated to the traditional crafts of the area that are and no longer practiced, namely ironworking and woodworking, which can be visited by appointment.

Abbey of San Donnino in Soglio
About 3 km from the centre of Rocca San Casciano stands the ancient Abbey of San Donnino in Soglio.
The original church, built around 1070 and documented as early as 1214, had a basilica layout with three naves. In the Middle Ages it was one of the oldest and most powerful Benedictine Abbeys and became the economic, cultural and spiritual centre of the Apennines thanks to its links with the castles of Montecerro and Orsarola, the Abbey of San Benedetto in Alpe and the hermitage of Camaldoli. The Monastery was ruled by Benedictine monks until the Council of Trent in 1563. In 1700 the building was rebuilt with a single nave and in a position further back than the medieval abbey palace that still stands. On the façade are several Istrian stone sculptures, symbols from the Romanesque period, from the original Abbey. The sculpture on the left represents St. Peter holding the crosier in his right hand and the keys to Heaven in the other. In the centre is the Lamb with the cross. On the right is a monk with a smoking censer. Under the inscription “Hoc Opus Fecit Dominus Petrus Abas”, there are three of the four evangelists. Inside the Abbey it is possible to admire what remains of the fresco “Episodes from the life of Saint Domninus” from the end of the 14th century, a work in late Gothic style, stylistically reminiscent of the Rimini school and the more recent Bologna school.
Castellaccio
Not far from the historic centre, on a hill, is the Castellaccio. It looks out over the town centre of Rocca San Casciano and looms over the roofs of the town’s elegant Tuscan-style houses at several points. The stone and mortar fortification was built around the year 1000 (11th century), probably at the behest of the Counts Calboli of Calbola. The latter actually had their main castle in Calboli (between Rocca San Casciano, Dovadola and Predappio). The expression “Rocca Sancti Cassiani in Casatico” was recorded in a document for the first time in 1197, naturally leading to the assumption of the existence of a castle which could be linked to the one currently known as Castellaccio. Since its origin, the purpose of the building has been to defend the medieval village from enemies as well as to control the Apennine passes in the area. The history of this monument is intertwined with the ancient rivalry between the Ghibelline Ordelaffi family and the Guelph De’ Calboli family. At the end of 1300, Francesco De’ Calboli left all his possessions to the Republic of Florence. The Castellaccio was largely destroyed by an earthquake in 1661. All that remains of the original large castle is its robust 15-metre-high tower, an ancient watchtower and large portions of the walls that have recently been brought to light.
Library of the Franciscan Friars
In 1749, Monsignor Gaetano Calvani retired to the Convent of the Franciscan Friars of Rocca San Casciano, taking with him his “distinguished library, rich in sacred, ecclesiastical and historical works”.
Before his death, he donated his collection to the friars who had taken him in. Thus, the Franciscan Library was born. The donation was so well received that the books were placed in twelve exquisite cherry wood shelves that are still in place. The good relationship between Calvani and the Friars is also testified by the carved wooden coat of arms, which can still be found in the Library, where the coat of arms of the former is combined with that of the latter. About 3000 volumes are currently preserved here, of which the following are of particular historical importance: the Cinquecentine (16th century books), “Le Rime del Petrarca” by Salvadorin, composed between 1513 and 1526, and the “Storia del Terremoto avvenuto a Rocca S. Casciano nel 1661” (History of the Earthquake in Rocca San Casciano in 1661) by M. Di Castro, printed in Faenza in 1664. Lastly, the library houses the flag donated by the people of Livorno to the people of Rocca San Casciano following the election of Francesco Domenico Guerrazzi as deputy for the Rocca San Casciano constituency in 1860. 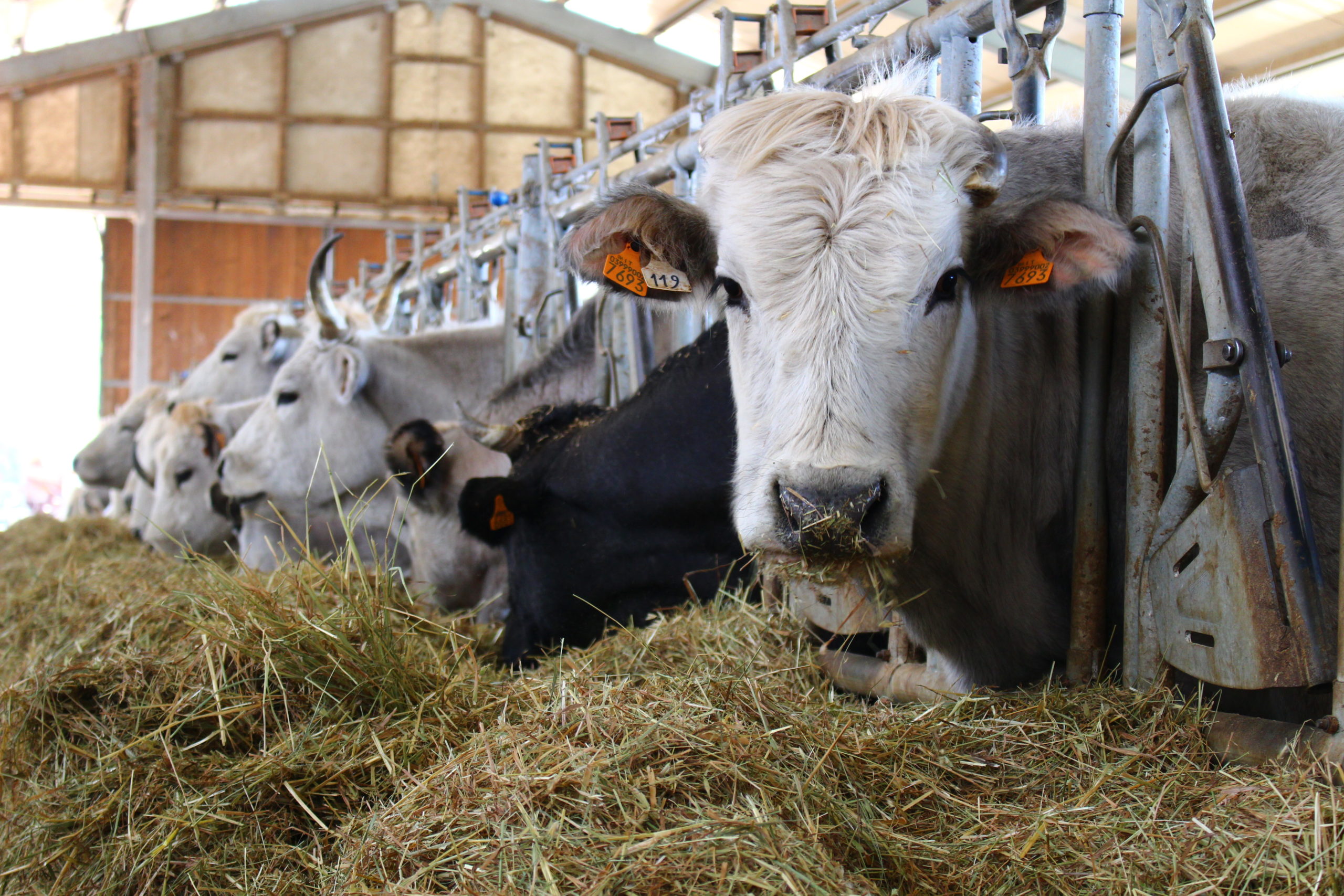 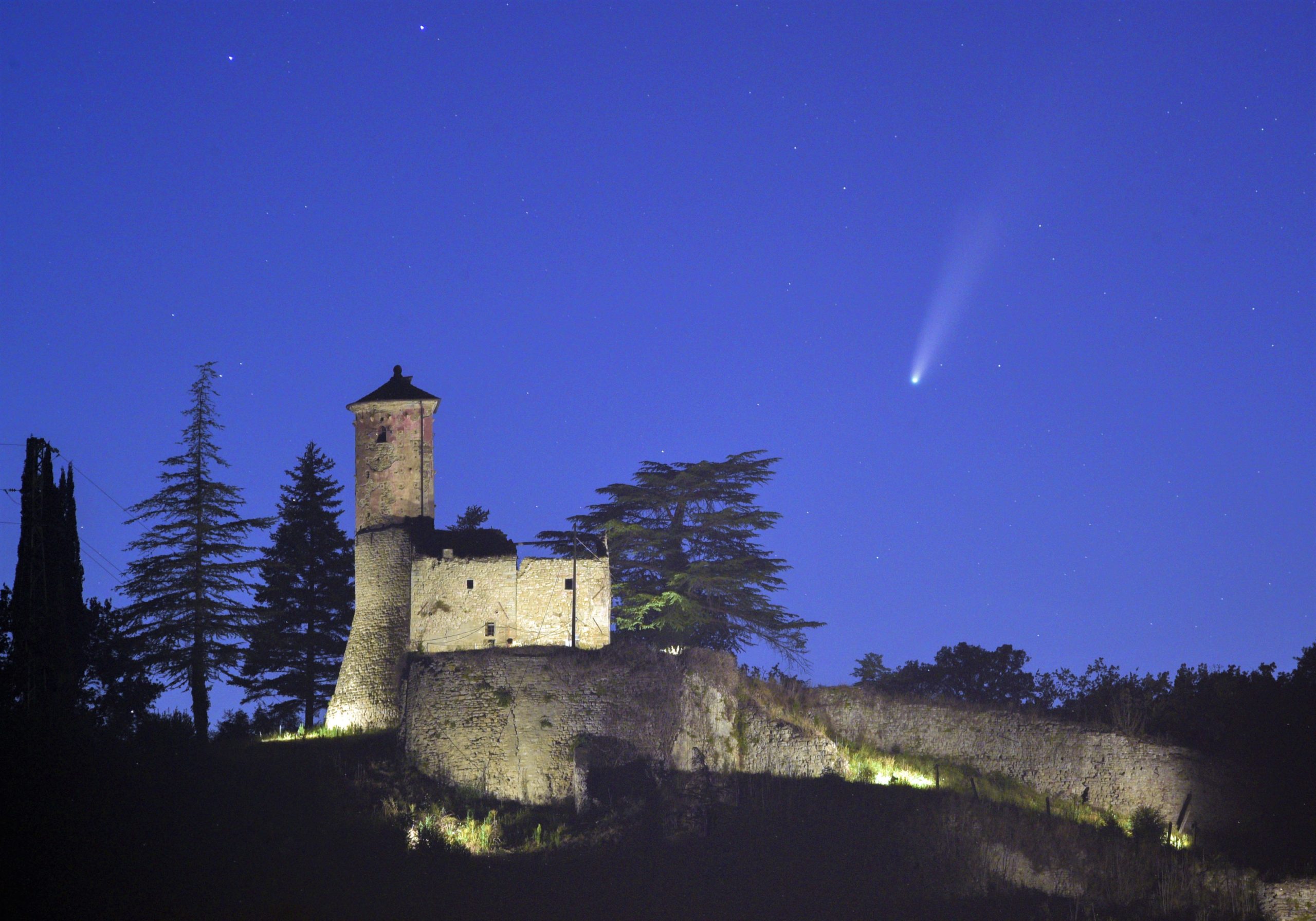 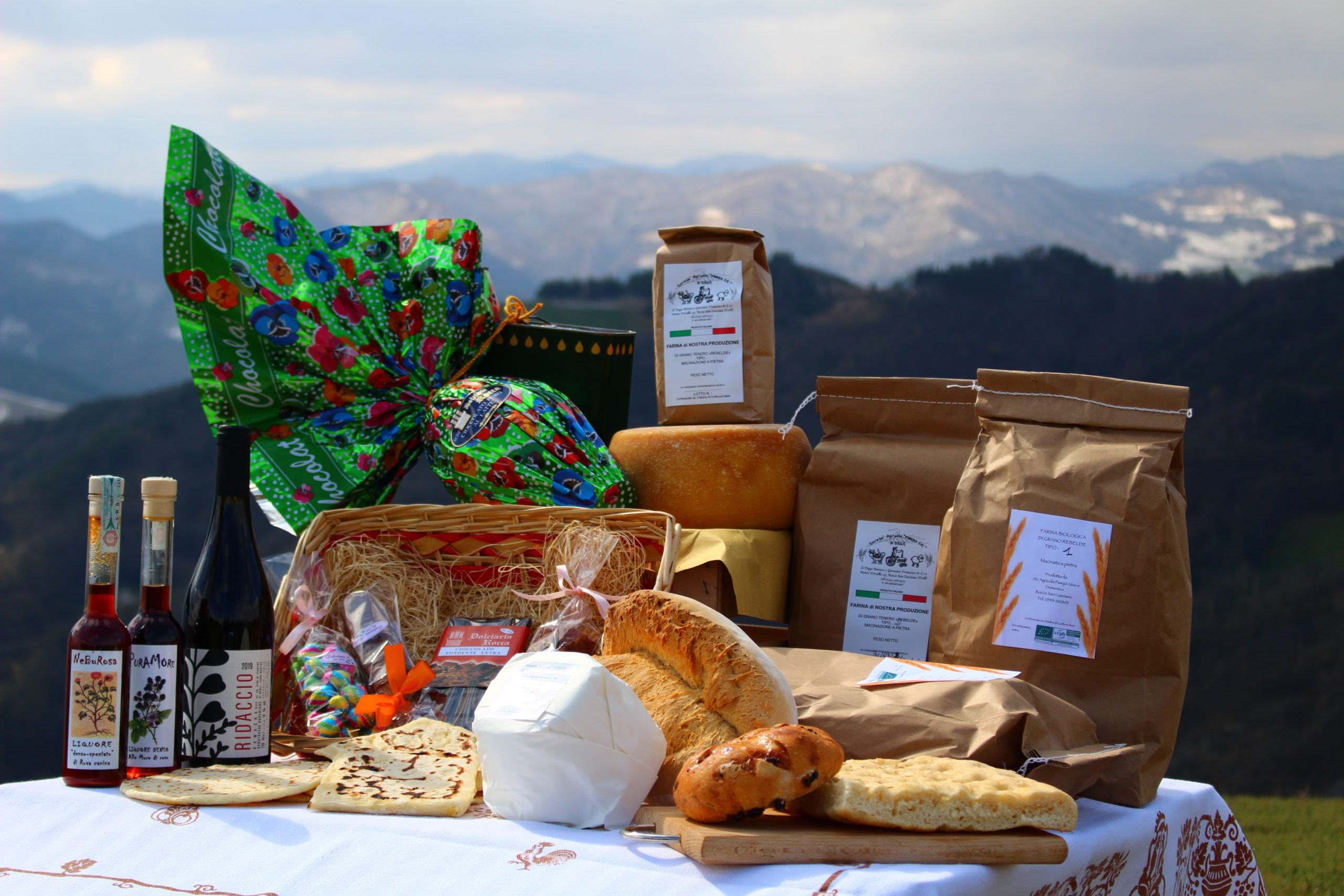