Forlimpopoli was first razed to the ground by the Lombards in the middle of the 7th century and then again, a few years later, after having hosted Dante Alighieri at the beginning of his exile. Forlimpopoli has always managed to be reborn, becoming a symbol of that quintessential stubbornness of Romagna people that also finds expression in its most famous monuments, from the splendid Rocca Ordelaffa (one of the best preserved fortresses in Romagna), built on the profile of a Romanesque cathedral, the scene of Caterina Sforza’s meetings and the mysterious death of Barbara Manfredi, to the “Giuseppe Verdi” cinema, a small 19th century architectural jewel made famous by the bloody deeds of the brigand “Passatore”. In the same complex, the “T. Aldini” Archaeological Museum illustrates the ancient link between the city founded by the Romans in the 2nd century B.C. and food culture (including material culture), by exhibiting the distinctive wine amphorae that were produced in local kilns and which are therefore called “Forlimpopoli-type”. This link was renewed over time as an agricultural and horse market until it found perfect fulfilment in the figure and work of Pellegrino Artusi, author of Science in the Kitchen and the Art of Eating Well, a central work not only in the history of cooking but also in the Risorgimento process of national unification. The “Casa Artusi”, the first and only cultural centre in Italy dedicated to home cooking, is dedicated to him. It is housed in the Chiesa dei Servi complex, an extraordinary example of Baroque architecture built on a previous Renaissance structure, which houses works of great value such as the altarpiece depicting the Annunciation by Marco Palmezzano. 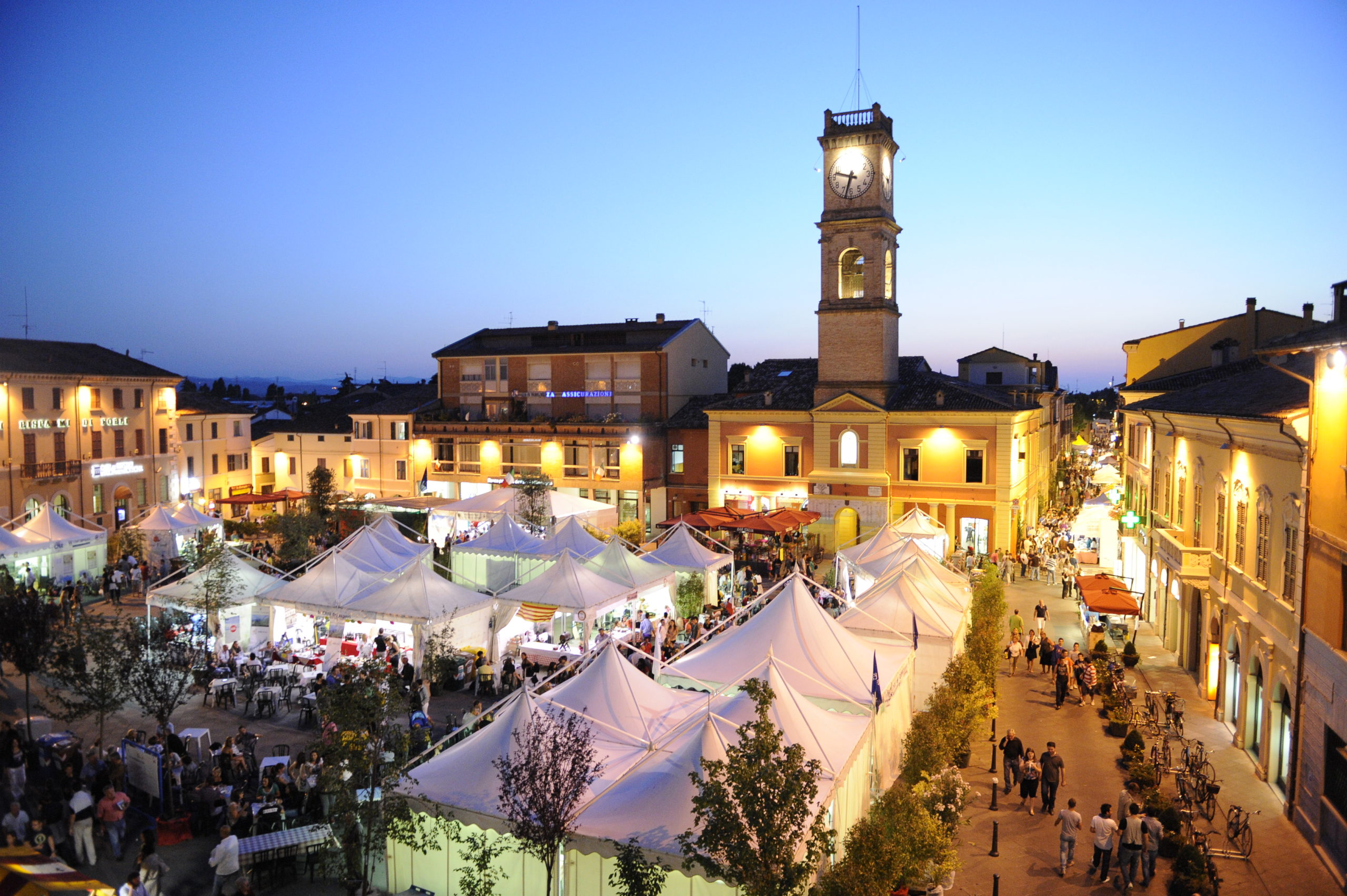 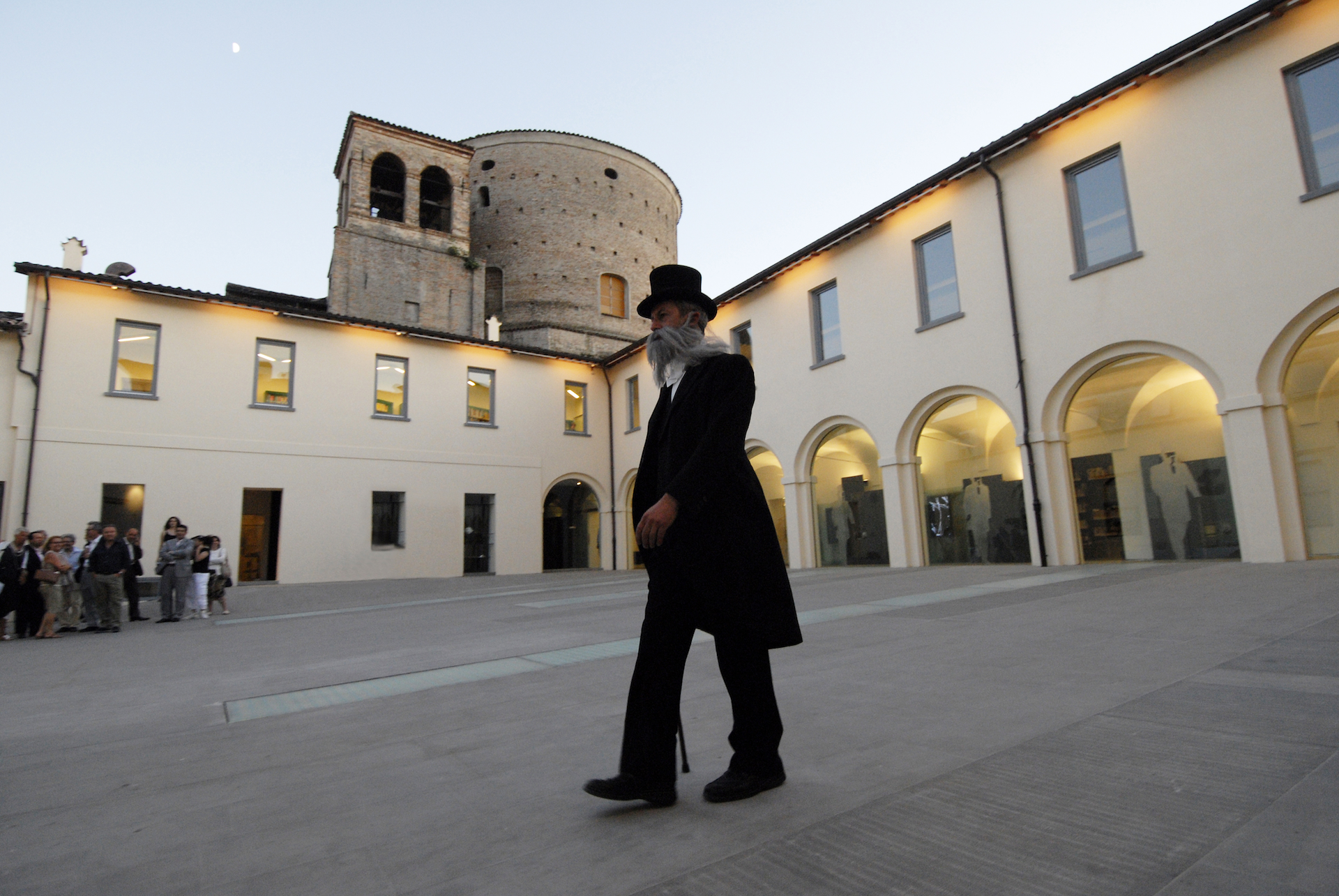 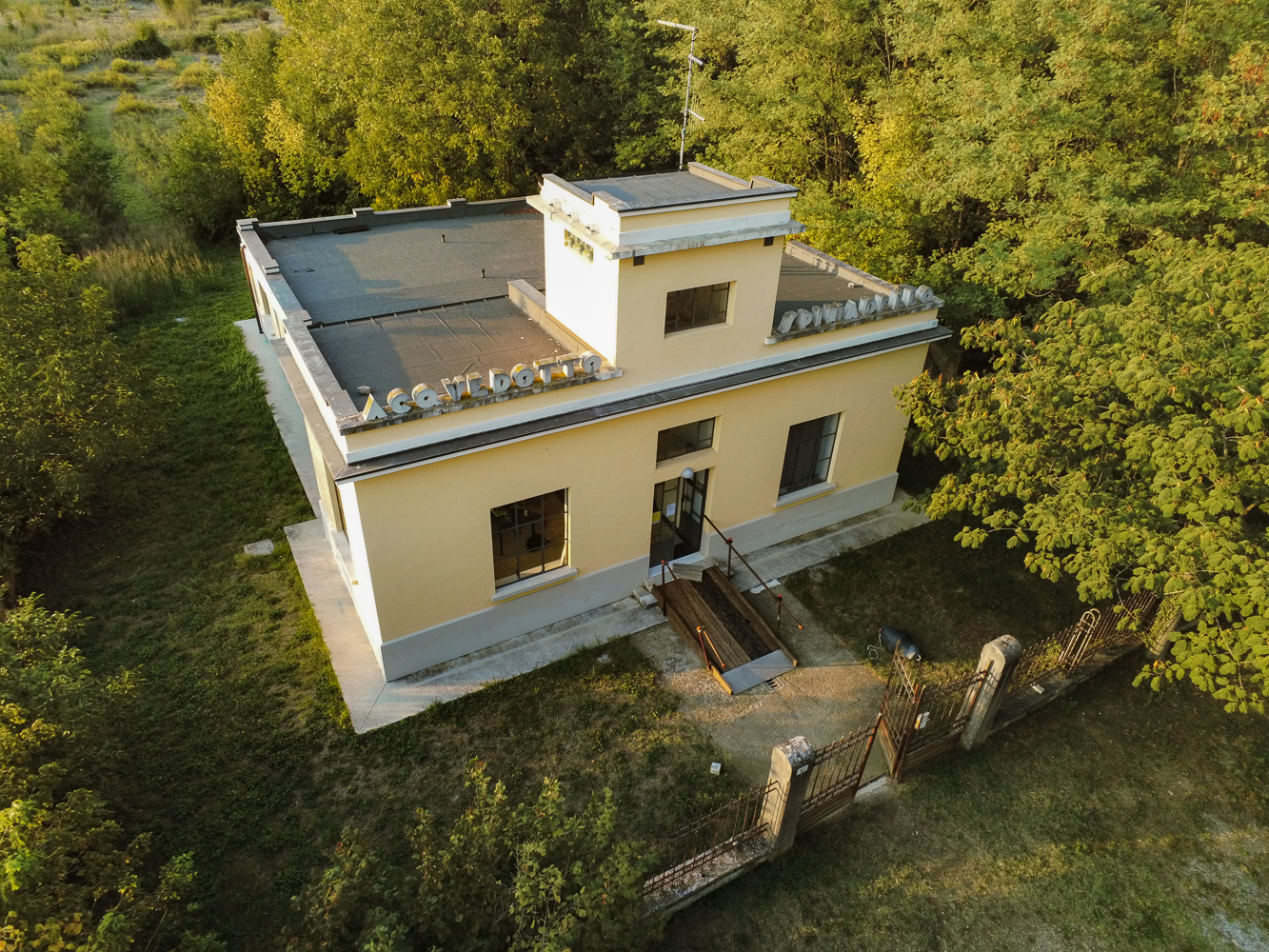 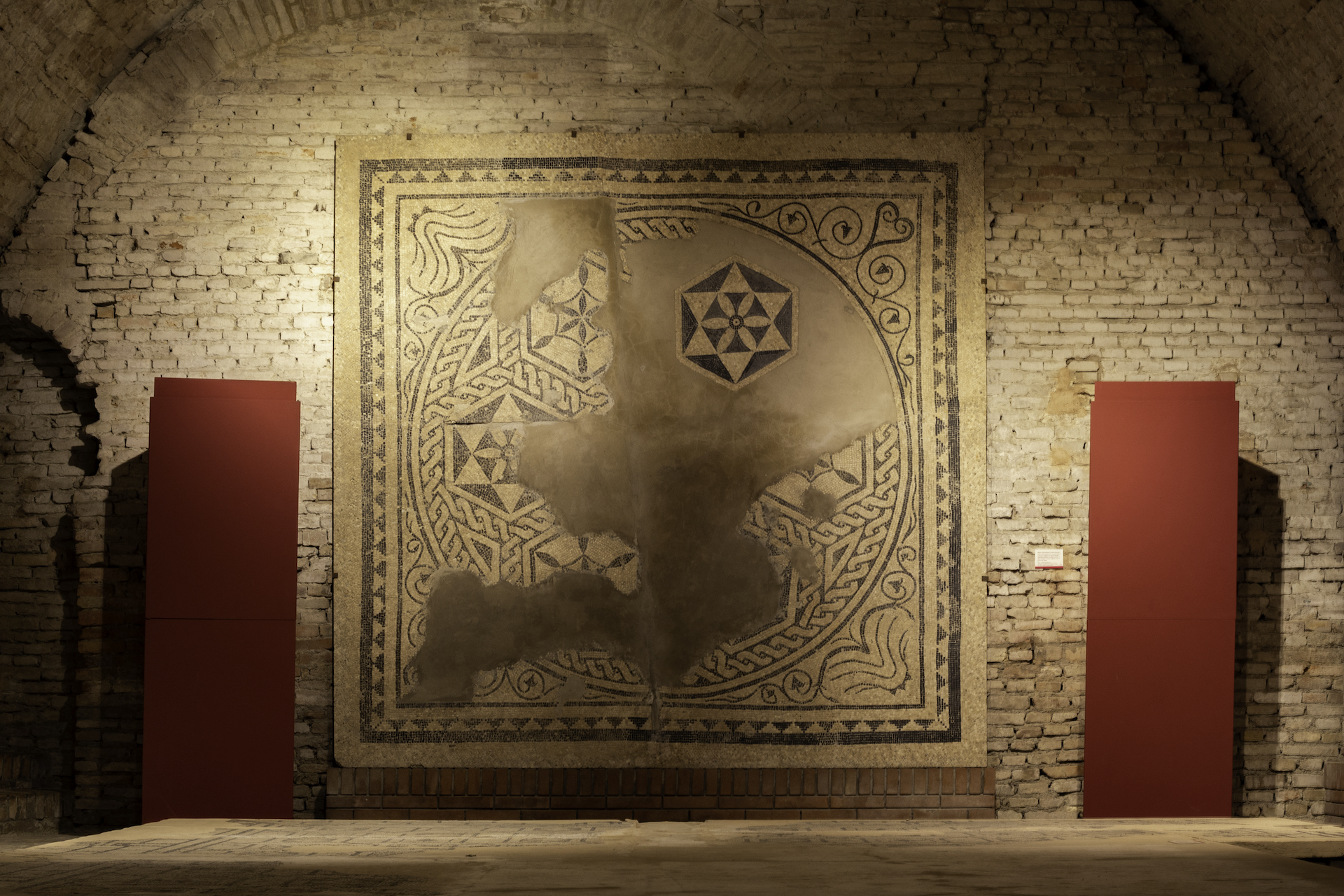 Naturally, the “T. Aldini” Archaeological Museum offers the visitor two routes: on the one hand, the Museum itself, housed in some of the most striking rooms of the Rocca Ordelaffa fortress, featuring the extraordinary remains of the Romanesque cathedral on which the fortress was built; on the other hand, the collections – mainly from the Roman era – that the Museum exhibits, including testimonies of daily life, from the “Forlimpopoli-type” wine amphorae to some large mosaics, from a very moving bone doll to a curious limestone sign of a dyer. The Museum also hosts ongoing exhibitions of contemporary art that engage in a fascinating dialogue with the most ancient finds.

This small municipal theatre is unique among the performing arts facilities built in Romagna during the 19th century. Inaugurated in 1830, it occupies what must have been the fortress’s ‘hall of honour’. In 1878 it was extended by the architect Fabbri from Bertinoro (1843–1905), replacing the original box structure with two rows of galleries supported by elegant cast iron columns. The large curtain painted for the occasion by Paolo Bacchetti is today kept in the nearby council chamber.

Inside, a plaque commemorates the famous raid by the bandit Passatore’s gang on January 25, 1851. In 2020, it celebrated 100 years of cinema activity.

Set in the stunning natural reserve that spreads out from the bed of the Ronco river, the Spinadello was the pumping station of the consortium for the aqueduct of the municipalities of Lugo, Cotignola, Forlimpopoli and Bertinoro, established in 1928. The building, which reflects the transition from the eclectic to the rationalist style, with the predominance of function over form, is now a venue for events and exhibitions, as well as a visitor centre from which you can explore the Parco dei Meandri del Ronco, with two small lakes where coots nest and dozens of extraordinary views where it is not uncommon to glimpse deer, foxes and other animals in their natural environment

The city that gave birth to Pellegrino Artusi cannot fail to offer a wide range of diverse and original gastronomic experiences, not only during the Feste Artusiane, when the entire historic centre of the city is transformed into one big mosaic of traditional restaurants (which make traditional cuisine from all the regions of Italy) and market stalls (at KM 0), but all year round. In fact, in addition to the Casa Artusi restaurant, which is institutionally called upon to represent national home cooking, the city is home to restaurants for all tastes, from fish-only to vegan restaurants, from piadinerie to ethnic restaurants, from pizzerias to the best traditional restaurants in Romagna, and even an evocative restaurant housed in a deconsecrated church. In addition to the numerous food retailers (including the centuries-old tradition of horse butchers), the Thursday food market is worth mentioning, with an organic section that also attracts visitors from neighbouring towns.

The imposing Rocca Ordelaffa is the beating heart of the town’s life. The first fortress was built between 1361 and 1363 at the behest of Cardinal Legate Albornoz on the ruins of the Romanesque cathedral, of which he himself ordered the destruction. In 1379 Sinibaldo Ordelaffi, lord of the city, carried out an initial transformation of the fortress, while Pino III, between 1471 and 1480, gave the structure its current size and appearance. Over the centuries, the complex came under the rule of the Riario-Sforza, Cesare Borgia, Rangoni and Zampeschi families. Having started to decline in the 17th century with the arrival of the French, it was handed over to the new municipality of Forlimpopoli at the end of the 18th century. The large hall became the hall of the Municipal Council, inside which you can still admire the small palatine chapel, decorated with 17th century frescoes attributed to Francesco Longhi (1544-1618) and the large curtain of the Municipal Theatre painted in the late 19th century by Paolo Bacchetti (1848-1886), depicting the destruction of Forlimpopoli and the entry into town of Cardinal Albornoz. In addition to the Town Hall, the Rocca now houses the “Verdi” Theatre and the town’s archaeological museum.

Writer and gastronome, Pellegrino Artusi is the universally recognised father of Italian cuisine. Born in Forlimpopoli on 4 August 1820, the only son of the 13 children of Agostino and Teresa Giunchi, he was soon initiated by his father into the family business. After being attacked on 25 January 1851 by the band of the brigand Stefano Pelloni, the Artusi family decided to move to Florence where Pellegrino made his fortune and retired to private life, dedicating himself to his passion for literature, publishing two studies on Foscolo and Giusti and, now seventy years old, Science in the Kitchen and the Art of Eating Well, a masterpiece of gastronomic writing and a cornerstone of Risorgimento literature. To Artusi, ambassador of Italian cuisine in the world, the city of Forlimpopoli has dedicated the first cultural centre dedicated to home cooking.

In the 15th century, the Fathers of the Order of the Servants of Mary began the construction of a church and adjoining convent on the site of the former Hospital of the Confraternita dei Battuti Neri. In 1707 the building was modernised, with the construction of eight massive pillars that gave the hall a circular layout and supported the imposing elliptical roof. Due to the Napoleonic suppressions, the Servite Fathers abandoned the complex in August 1797. Inside, the walls are lined with six altars decorated with stuccoes and valuable works of art, including the altar of the Annunciation with the altarpiece of the same name by Marco Palmezzano (1463-1539), the decorations of the organ doors made in 1576 by the painter Livio Modigliani from Forlì (1565-1606) and the two large canvases from the end of the 16th century depicting The Massacre of the Innocents and the Miracle of Mount Amiata, on display at the sides of the high altar. On the southern side of the presbytery there is the Chapel of the Immaculate Heart of Mary, built by the Battuti Neri in 1634 and decorated by the Forlimpopoli painter Paolo Bacchetti (1848-1876). Restoration work currently underway will soon return the bell tower to public use, making it possible to admire the town of Forlimpopoli from above.

The church is dedicated to St Rufillus, the first bishop of the diocese of Forlimpopoli, who lived in the 4th century AD. Archaeological investigations date the oldest building phase of the church between the 6th and 8th-9th centuries AD. Between 1819 and 1821, the building was enlarged and renovated in the neoclassical style to its current appearance. On the outside, a pronaos was added onto the façade, under which the two 16th-century sepulchres, in Istrian stone, of Brunoro I and Brunoro II Zampeschi, lords of Forlimpopoli, were placed. In the presbytery is the old marble episcopal chair with an 18th century wooden chancel. The Chapel of the Santissimo Sacramento contains an altarpiece attributed to the Forlì painter Giuseppe Marchetti (1722-1801). Paolo Bacchetti (1848-1886) from Forlimpopoli painted the apsidal basin and nave between 1881 and 1882. Outside, at the base of the 1521 Lombard-style bell tower, a marble lion’s head from the Roman era is walled in.