The name of this medieval village, situated in the foothills of the Tuscan-Romagna Apennines along the Montone valley, seems to be derived from the Latin duo- vadora (two fords).
In fact, its historic centre, in addition to being distinguished by the fortification erected by the Guidi Counts around the year 1000, is situated on a bend in the river that is crossed both on entering and leaving the town.
The first traces date back to the Romanesque period, but the structure of the present town dates back to around 1200 when it became a fortified citadel of the Guidi Counts.
A parchment from 1263 gives us, albeit briefly, a first description of the Castle of Dovadola, formed by the circle and the village.
The former, which was the oldest and most fortified part of the settlement, was accessed through the Gate (the current Clock Tower) and included the town walls and the site of the Rocca (fortress).
During the 13th century, the village outside the gate was expanded with the construction of new buildings and was walled in.
Towards the end of the century and at the beginning of the 14th century, the lower village was developed on the eastern side of the square. It too was walled in and equipped with a gateway beyond which, after a short distance, the bridge over the Montone river to the valley could be reached.
The historic centre was kept intact in its basic outline of a medieval castle until the early decades of the 19th century, when, to make way for the Strada Regia Forlivese through the centre of town, the old Palazzo Pretorio with its ancient “loggione” (gallery), some private buildings in the square and the village gates were demolished.
In short, the architecture can also be said to be influenced by Tuscany, as Dovadola only became a part of Romagna in 1923.
Although it is very close to Forlì, Dovadola today is a town that continues to maintain its identity as a rural village rooted in its traditions. One of these is the search for and preparation of the highly prized white truffle; the white truffle festival has been celebrated for more than 30 years on the third and the fourth Sundays in October. A visit for this occasion is a must.
Apart from this unmissable event, the main tourist attractions are mainly of a religious nature, such as the Hermitage of Montepaolo and the Sarcophagus of Benedetta Bianchi Porro. 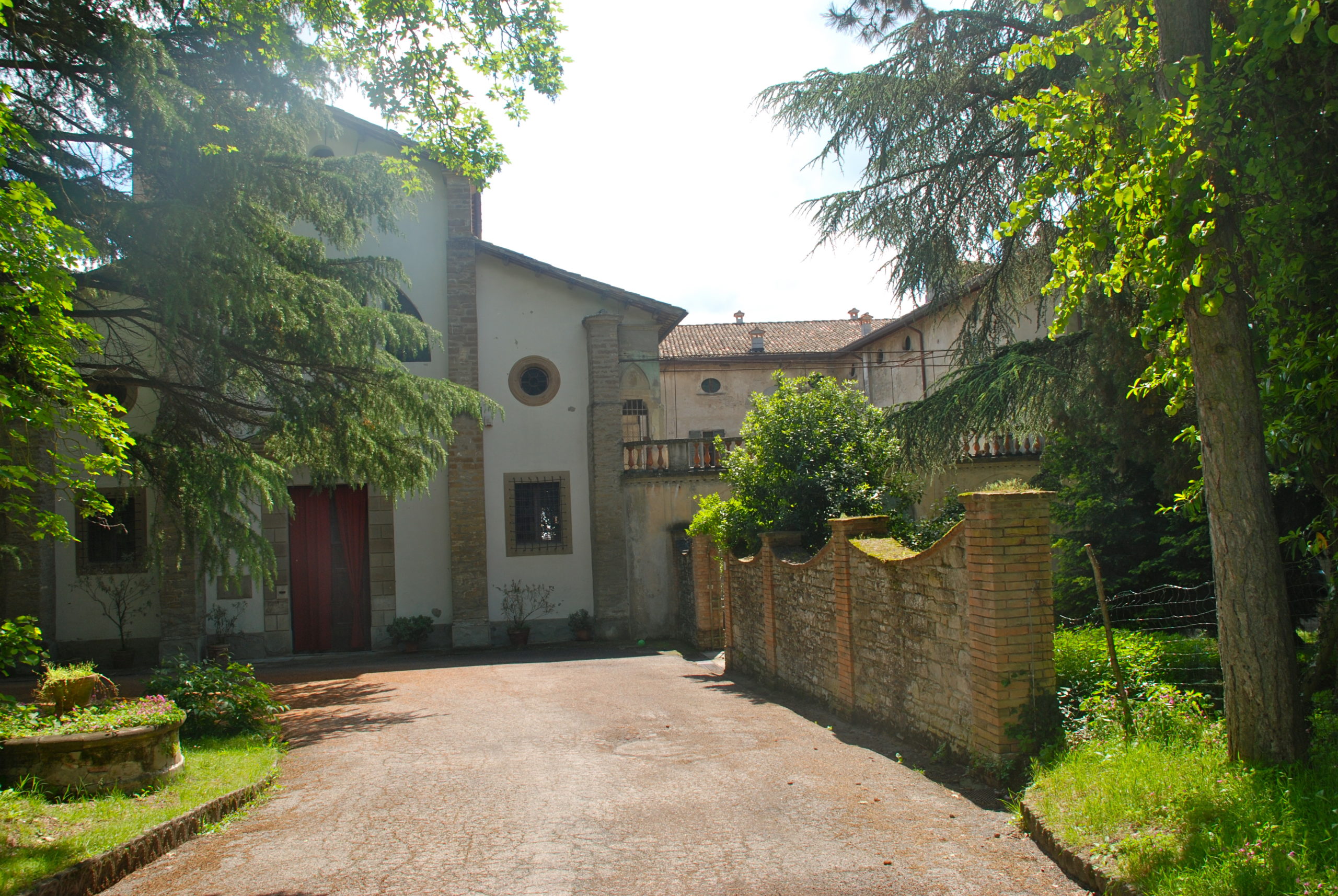 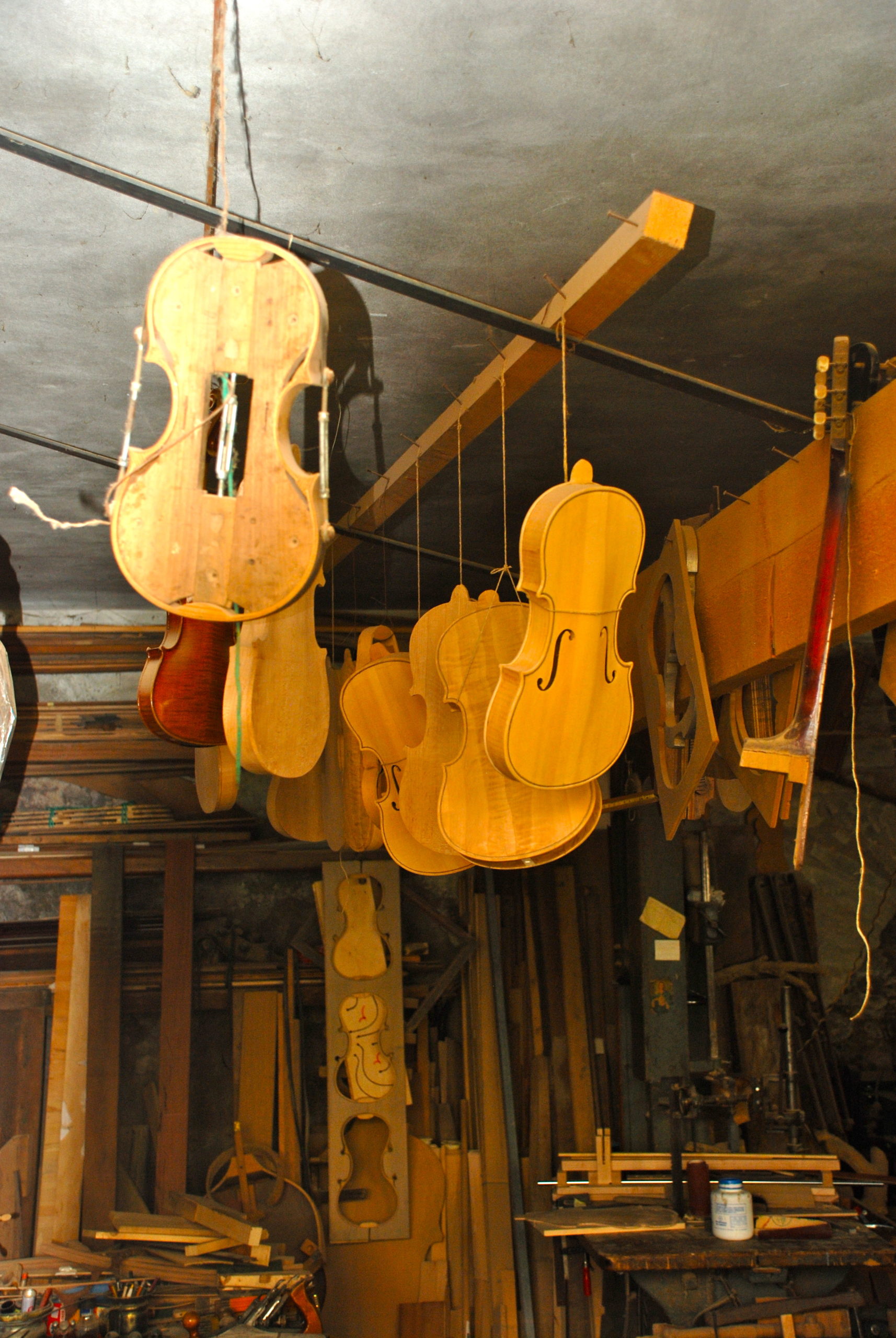 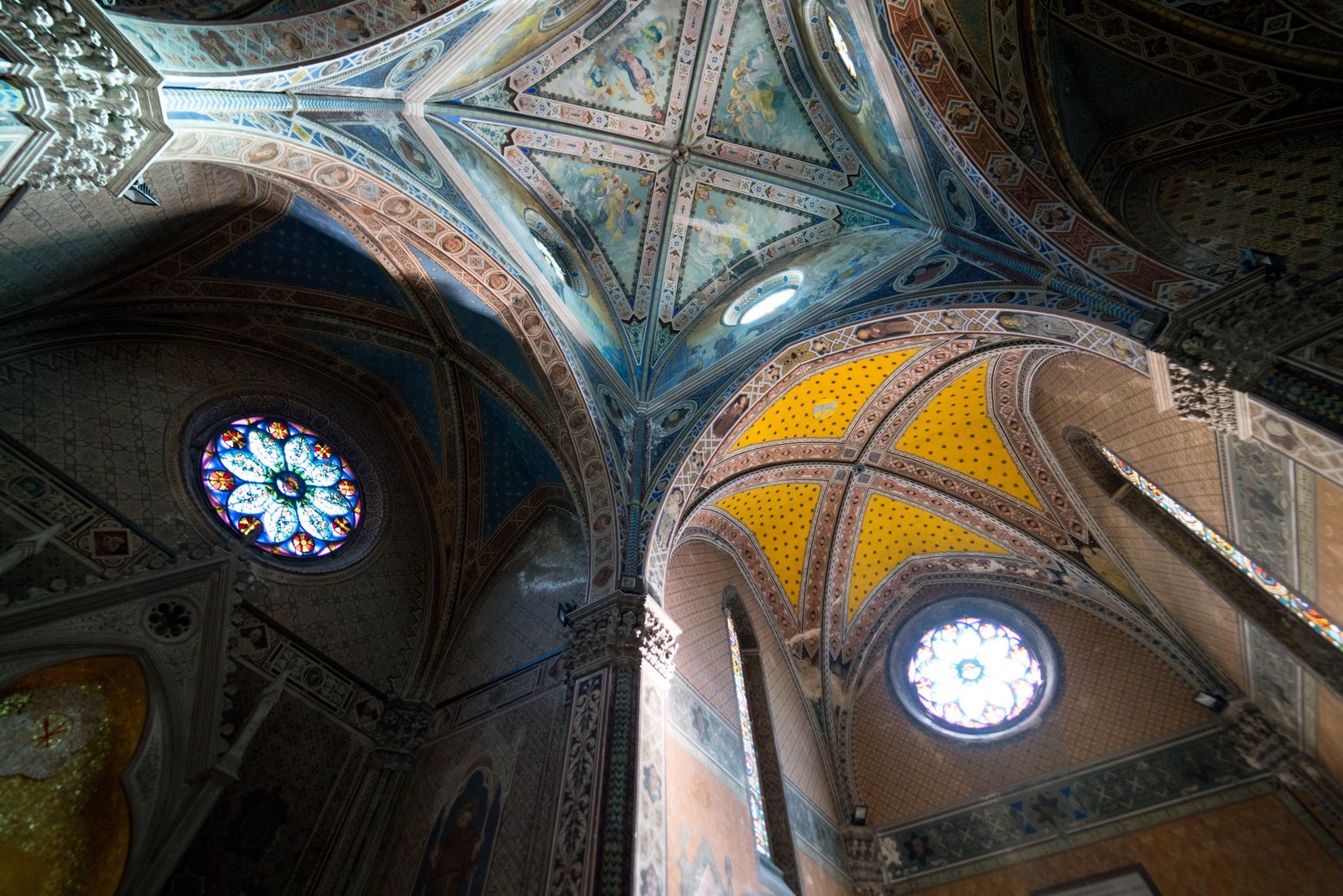 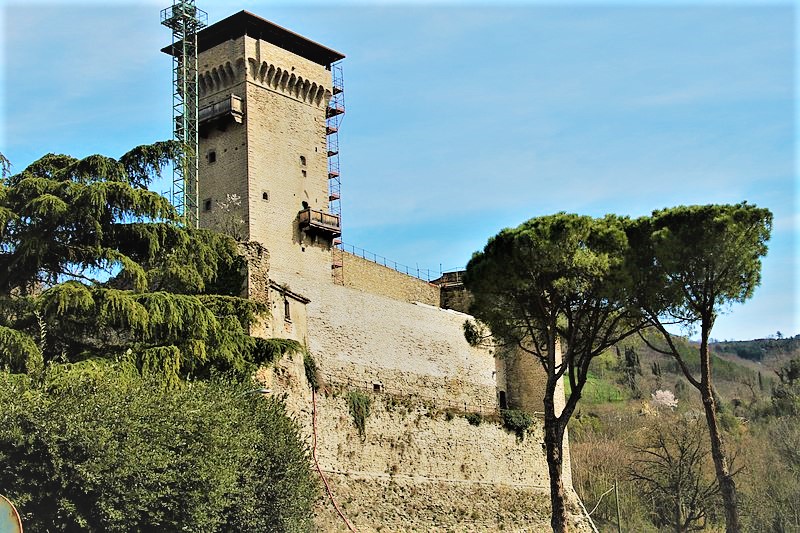 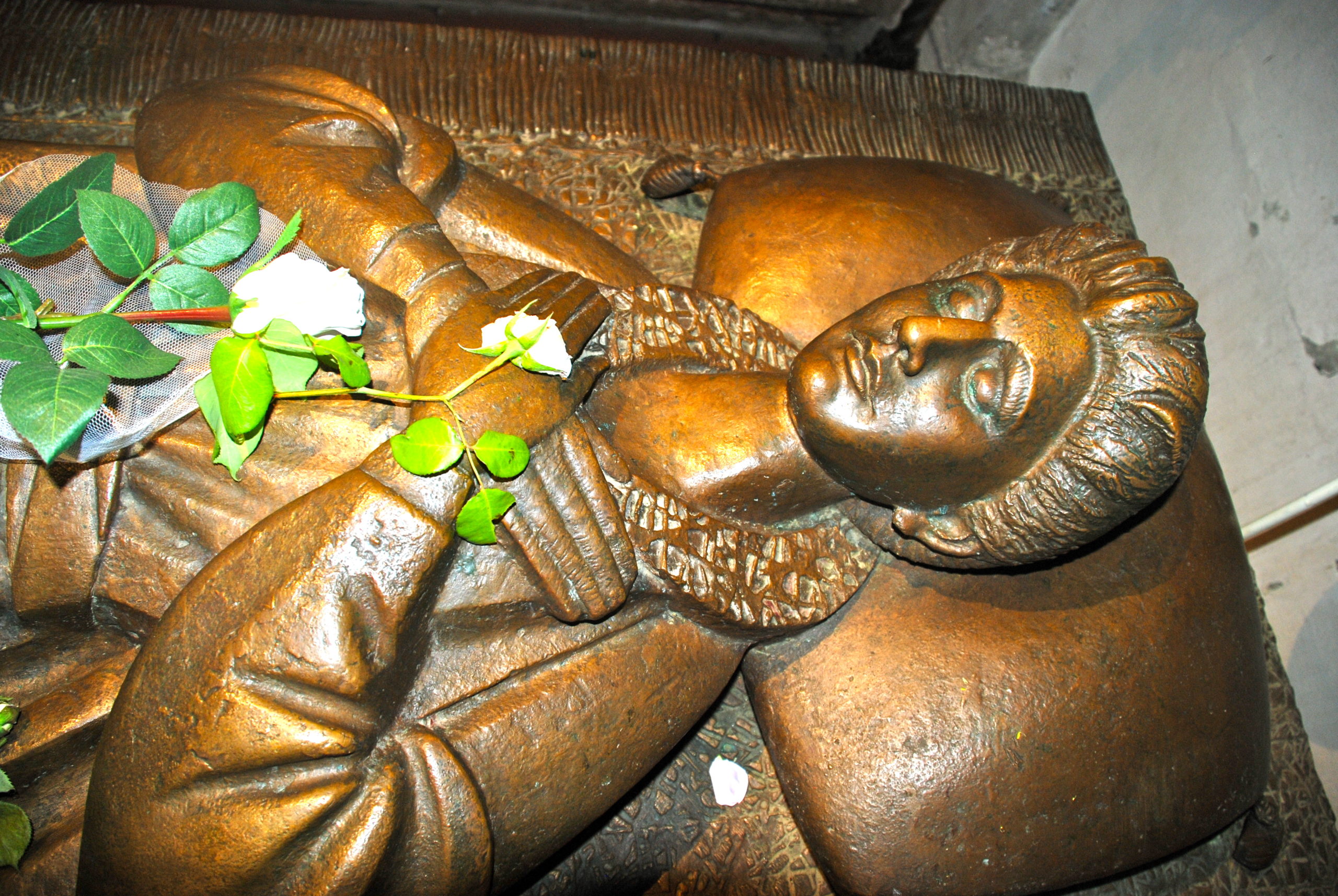 The Abbey of Sant'Andrea

The Abbey of Dovadola dates back to the 11th century and was built on the site of an ancient abbey founded by Cluniac monks.
The first record of the Abbey is in a parchment dated 13 March 1005, with which the abbot of the monastery of Sant’Andrea in Ravenna granted the church of Dovadola (also dedicated to Saint Andrea) its appurtenances of lands, vineyards, buildings and the manse built next to it in emphyteusis.
In 1850, together with the churches and territories of Florentine Romagna, the Abbey became part of the diocese of Modigliana until the 1880s when, with the reorganisation of diocesian circumscriptions, Dovadola and the other municipalities of the hills and mountains around Forli were aggregated to the diocese of Forli — Bertinoro.
The Abbey is an important tourist destination as it houses the sarcophagus of the Venerable Benedetta Bianchi Porro.

Montepaolo is where St. Anthony of Padua stayed for more than a year (1121-1122) in the small Franciscan convent, presumably belonging to the Benedictine Abbey of Sant’Andrea in Dovadola. The hermitage during the Saint’s time was set in a different landscape from that of today, but, at the beginning of the 20th century, following earthquakes, a decision was made to abandon the hermitage and demolish the “grotto” which was rebuilt higher up and inaugurated in 1905.
The construction of the new Sanctuary in the Montepaolo area began in 1908.
The Greek-cross structure, in neo-Gothic style, was designed by Father Baldassarre da Bibbiena and decorated by painters Giacomo Gemmi, Giovanni Bassan from Treviso and Bruno Mazzoni from Doavadola on the entire wall surface in the manner of the Basilica of St. Francis of Assisi.
In 1997, the painter Lorenzo Ceregato painted ten frescoes on the life of St. Anthony placed along the path that leads from the Sanctuary to the Grotto, a which is called “the path of Hope”. In the same year, an important relic of the Saint’s body was placed in the Chapel of the Immaculate Conception.

This prized bakery only works with flours designated “farine di qualità” (quality flours) for a higher quality bread.
All the flours used in the bakery have these 5 characteristics:
they are flours from ancient grains – grains that have not undergone any modification by man;
they are organic flours – the organic farming system is perfectly suited to ancient cereals;
they are local flours – using local flours encourages farmers to grow ancient grains organically, so our soil will be less polluted, our animals will eat more natural straw and the community will be able to consume food made from healthier flours;
they are stone ground flours – the flours undergo a milling process. The grain is turned into flour by “rubbing” it between stones at low speed so that its properties remain intact; they are unrefined flours.

A village festival with food stands offering truffle dishes and traditional dishes from Romagna.
The festival offers a variety of truffle specialities: crostini, tagliatelle, tagliolini, antipasti, focacce, polenta and meat.
The highlight of the festival is the award ceremony for the truffle hunters who bring the best quality or the largest quantity.
Finally, the most coveted prize “the golden truffle” is awarded to the person carrying the largest tuber.
The festival does not just offer truffle specialties, but also other attractions. The town holds a street market, where you can find everything from everyday goods, to stalls with local products: first and foremost the truffles, but also mushrooms, undergrowth products, chestnuts, marroni chestnuts, apples, etc.
Some local painters and sculptors hold exhibitions every year. An orchestra then livens up the Sunday afternoon with traditional music.

Luthier
Foscolo Lombardi is a luthier, sculptor, and cabinetmaker. The last from a workshop that is almost 200 years old. His grandfather Angelo Lombardi, a cartwright, built guitars and violins in winter, while his father Giuseppe also built a number of double basses along with violins.
At the age of eleven, Foscolo made his first mandolin, selling it for 500 lire. When he grew up, he became passionate about furniture, especially designing dining rooms. Then he dedicated himself to 3-, 4- and 5-string double basses, jazz and concert instruments, utilising various woods, different body sizes and different soundboard thicknesses in order to get the right timbre and sound power for the music and the historical period. Then violins, using models from various schools (Amati, Stradivari and Guarnieri) with slight or major alterations, as well as personal creations. Eventually, he devoted himself to inlaid lutes, chitarroni, marine trumpets, cornets, mutes, baroque violas and cistri, participating in various television programs to which he has been invited to exhibit his work and talk about being a luthier.
For several years he has been creating sculptures made of different materials. He has taken part in dozens of exhibitions held in various cities (Paris “at Cartier”, the Vatican Museums, Milan, Bologna, Ravenna, Forlì, etc.). He also engraves coins by hand and makes themed medals: Telethon, Archeoclub, historical figures, castles, towns and religious festivals.

Architecture and structure of the Rocca dei Conti Guidi
Going up the Valle del Montone, about eight kilometres from Castrocaro, on the Strada Statale 67 Tosco Romagnola, you can visit Dovadola and its imposing fortress. Probably built on ancient Lombard outposts, the current layout dates back to the 13th century, with additions and alterations made in the 15th century. Overlooking the valley, it monitored the road linking Romagna to Tuscany, forming a sort of barrier. It has characteristic “C” layout and the north-eastern curtain wall is defended on one side by an imposing 31-metre-high keep measuring approximately 9 metres by 7.5 metres (probably dating back to the 13th century) and on the other by two round towers (probably dating back to the 15th century) equipped with bombards and placed to protect against attacks from the lower reaches of the river (on the side towards Romagna). The entrance, once equipped with a drawbridge, is located on the smaller north-west side. The fortress is built on three blocks stacked on top of each other and linked together, which connect the main entrance to the keep through a narrow pathway. Inside the keep there were originally six overlapping rooms accessed by a spiral staircase.

Oratory of Saint Anthony of Padua
The oratory was built as a chapel of the medieval castle and is in located on the road that led to the fort of the Guidi Counts in Tuscany.
Later, the chapel passed under the patronage of the family of the Marquis Tartagni Marvelli family, who modified it at the behest of Abbot Giovanni Battista Tartagni, thus giving it the architectural form that it still has today, with the baroque features of the time.
The oratory is remembered in the pastoral visits of the bishops of Bertinoro in the years 1727, 1734, 1790 and 1832 as a “magnificent construction”, one that was not too large, elegant in shape and adorned with beautiful paintings.
It consists of three naves, but the two side naves are raised above the central one.
Inside there are paintings that are notable for their high quality, distinct style and perfect state of conservation, which are the work of Giacomo Zampa (1731 – 1808) made in 1778.
The Oratory contains the tombstones of the fallen of the two world wars, which also gives it the character of a memorial.

Clock Tower and Old Town
A historical parchment dating back to 1263 provides the first record of the castle of Dovadola, which was formed by the circle and the village. The first, which was the oldest and best fortified part of the settlement, was accessed through the gate (now the clock tower) included the town’s walls and the fortress.
The clock tower overlooks Piazza Cesare Battisti in the centre of the town. The base of the bell tower, with a large arch, forms the passage to the ancient Via Marvelli. The structure with a four-pitch roof is peculiar and clearly visible to those coming from Forlì. On the west façade there is a large clock in perfect working order. 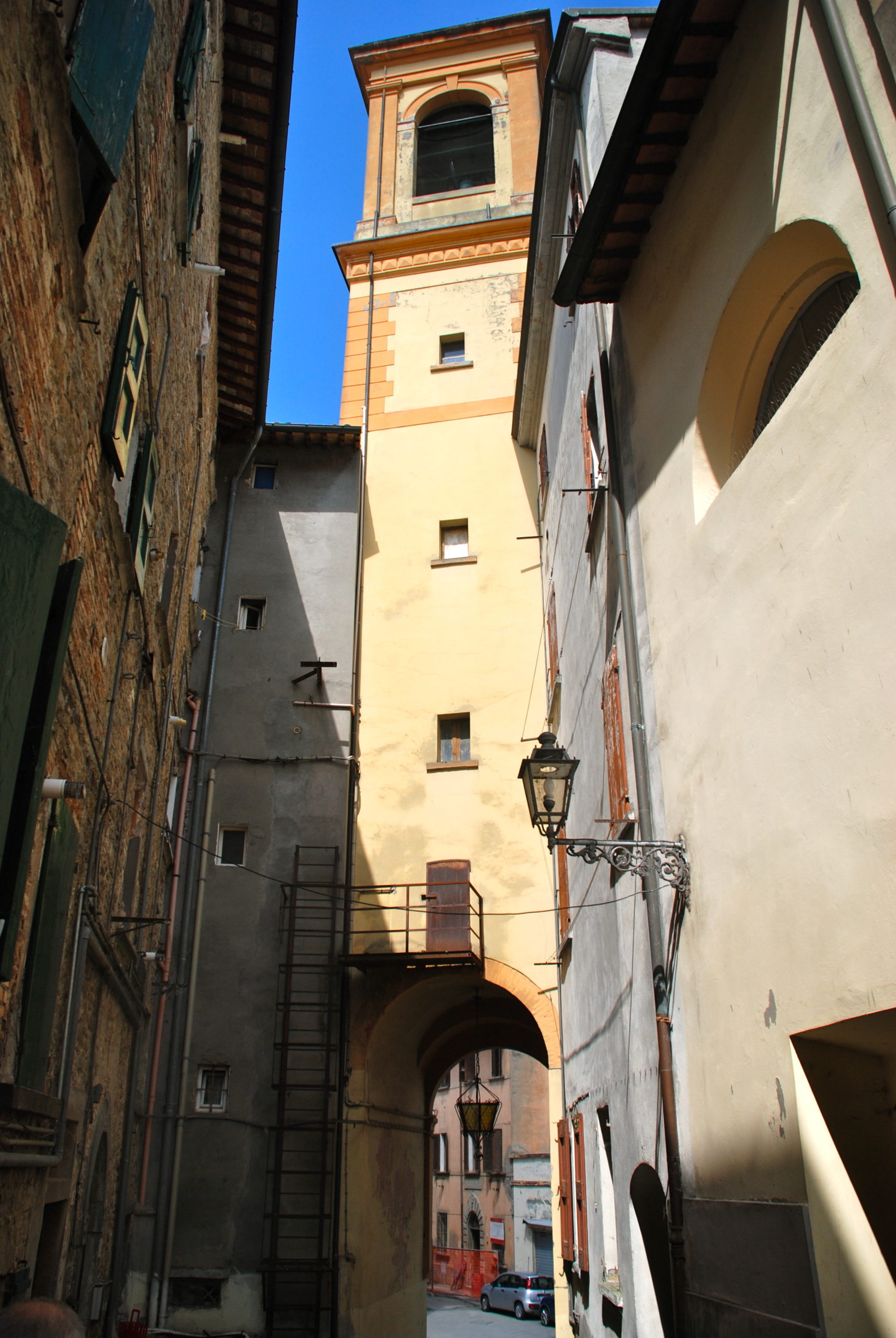 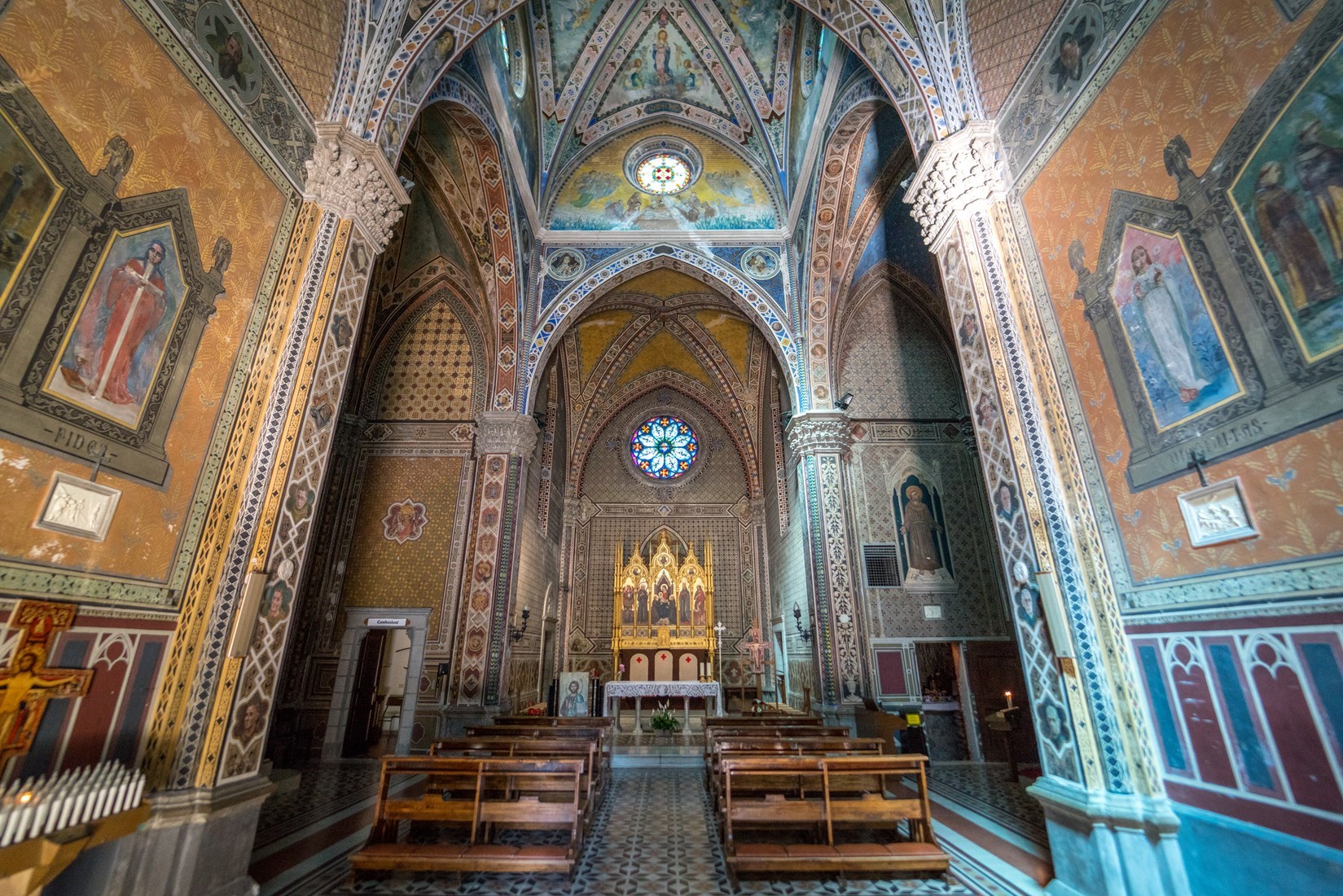 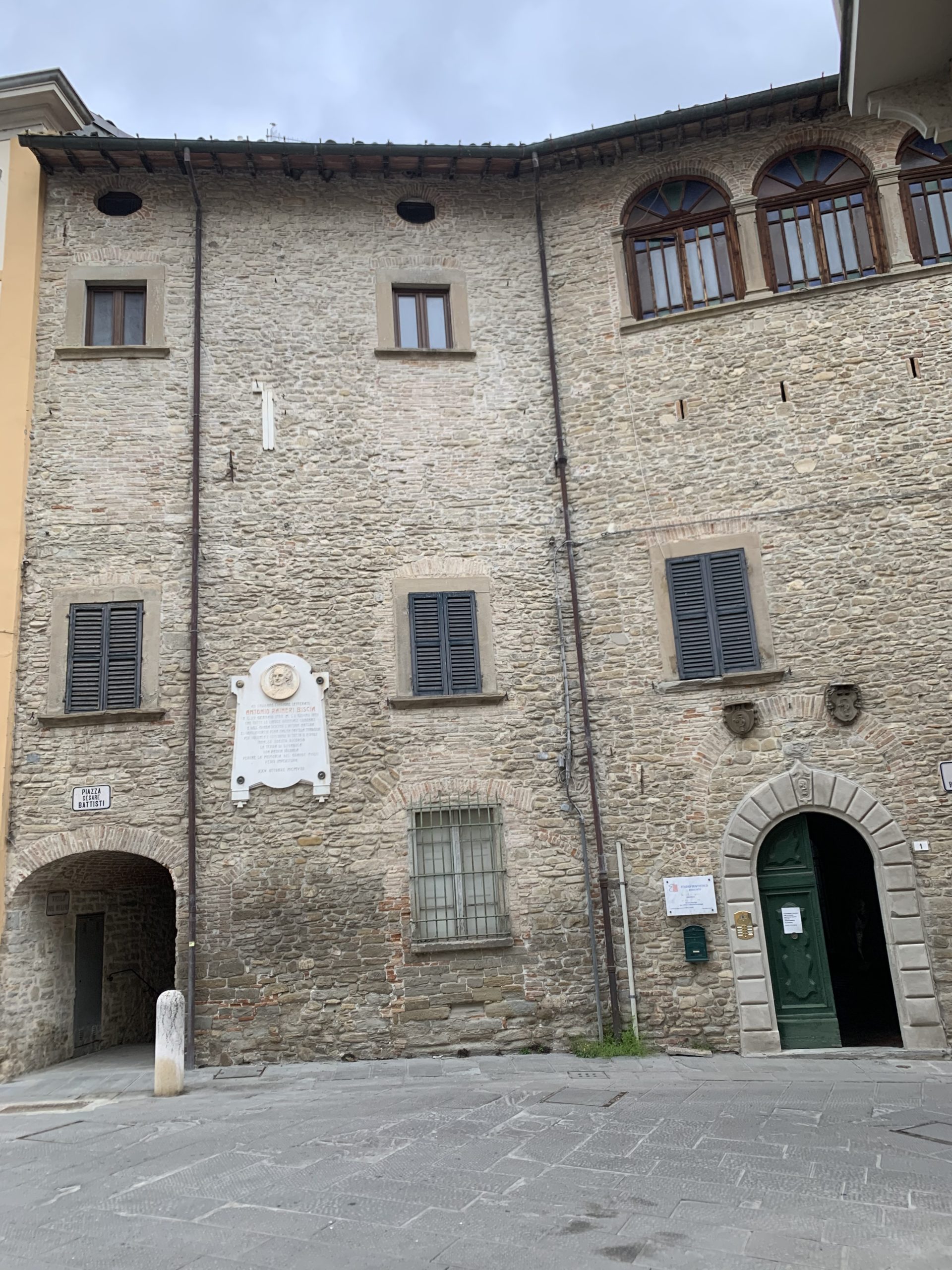 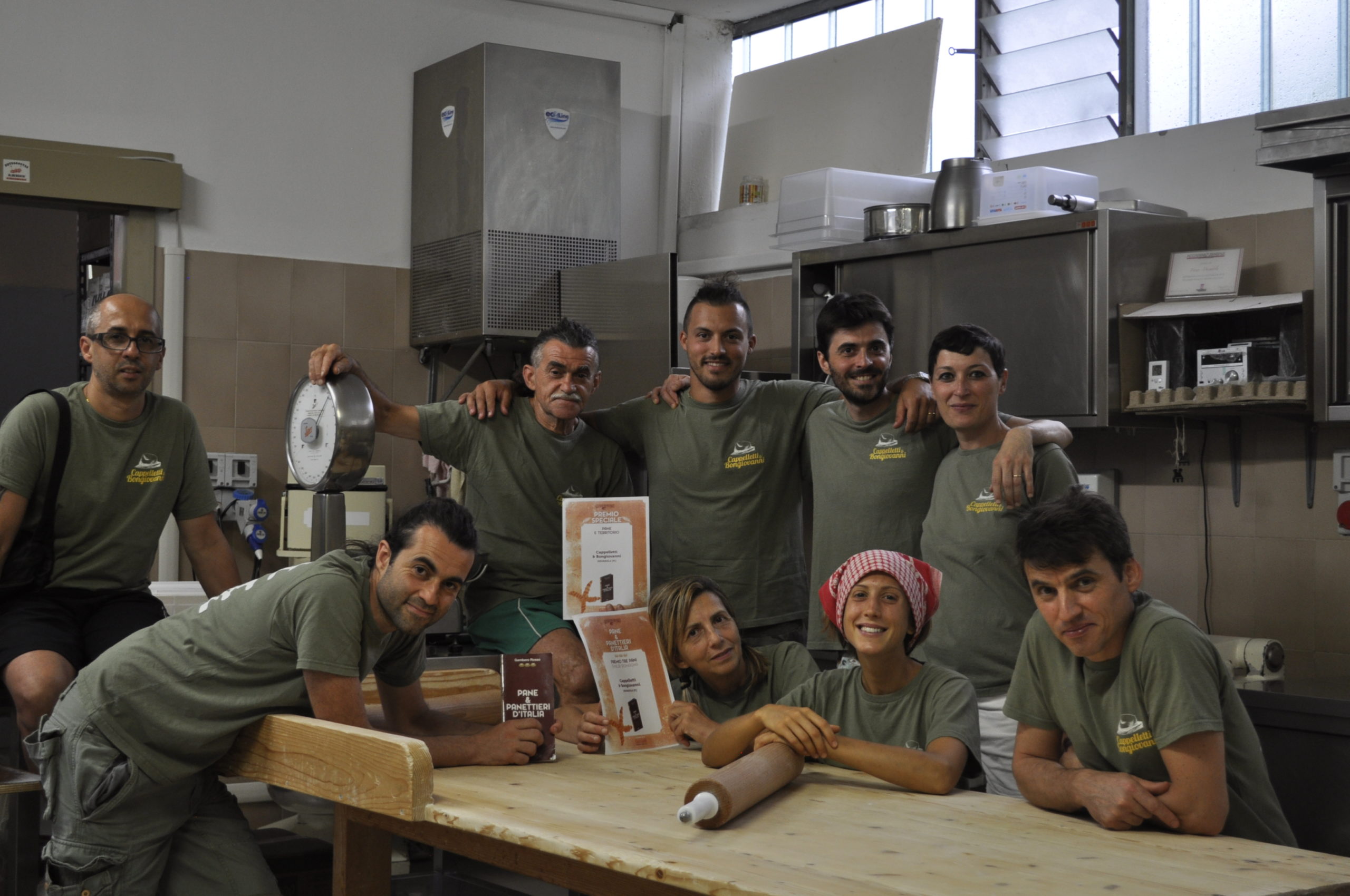