The entire municipal territory includes the Po di Volano, which runs through its urban centre, but also the vast wooded and pinewood areas of the Po Delta, up to the Adriatic Sea, thanks to the small port of the ancient village of Volano. It is a jewel in which environment, history and monuments coexist harmoniously.
Even today, thanks to the prestigious national poetry contest of the same name, the ancient name of Caput Gauri, linked to the place where the Po di Goro once stood, evokes the medieval splendour of the Codigoro area.
The development of Codigoro over the centuries revolves around the Pomposa abbey complex, a flourishing centre of Christianity in the Middle Ages.
The history of the area is inextricably linked to the land reclamation works started around the 7th century A.D. by the Benedictine monks. 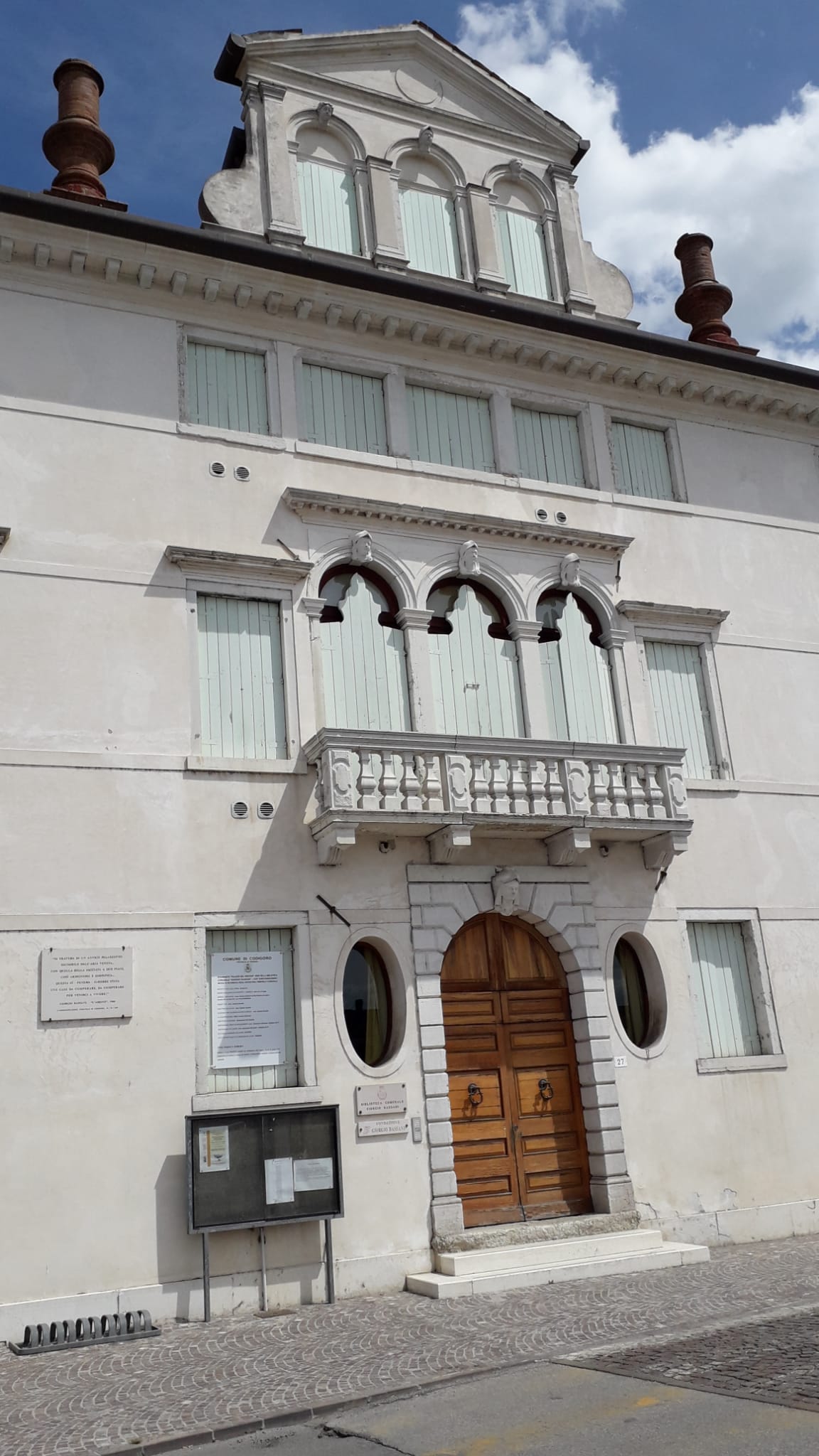 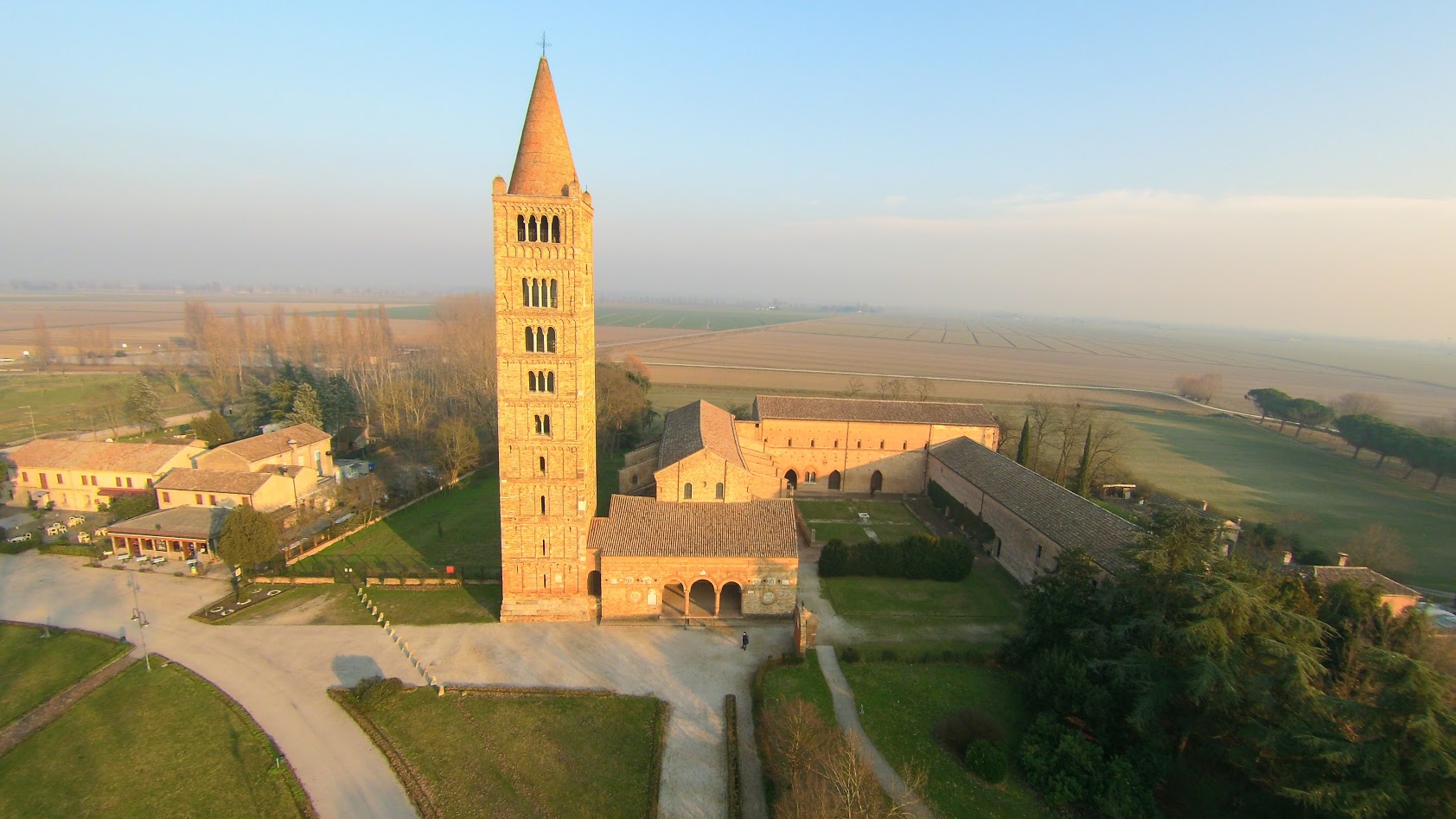 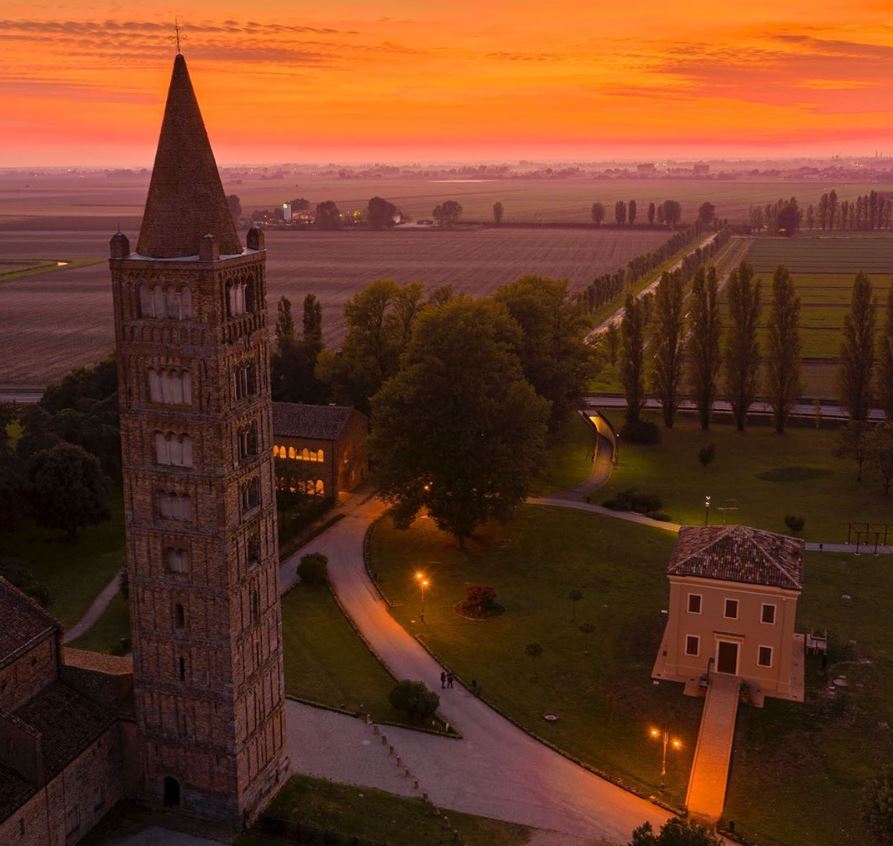 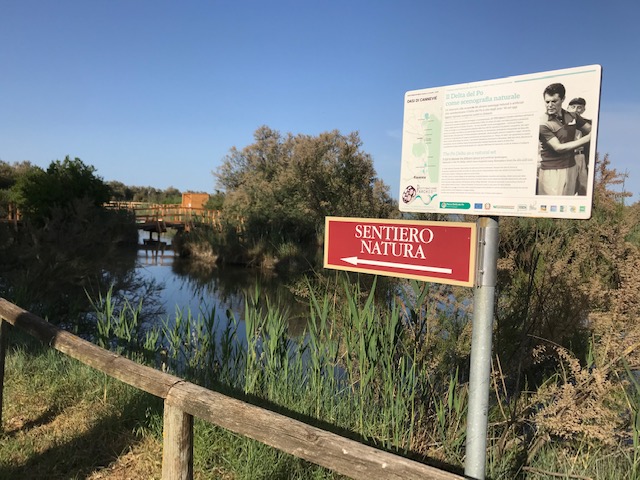 On the outskirts of Codigoro, the naturalistic oasis La Garzaia, also known as the City of the Herons, is an eight-hectare green area, where numerous species of the Po Delta’s avifauna nest. A visit to the Garzaia is an absolute must for lovers of environmental tourism and birdwatching.

A short distance from the Garzaia is the headquarters of the Consorzio di Bonifica Pianura di Ferrara (Ferrara Land Reclamation Consortium), built between 1872 and 1874, an imposing water pumping plant, a symbol of the extensive reclamation works of past centuries and, at the same time, of the sweat and toil of thousands of scariolanti (workers who moved earth using a wheelbarrow, “carriola”), legendary figures, thanks to which thousands of hectares of marshy lands were transformed into fertile areas. The headquarters of the Consorzio di Bonifica is the starting point for an atmospheric, fascinating Bassaniano Route, which weaves together history, the environment and literature, in the form of Giorgio Bassani’s famous novel “L’Airone” (The Heron). The Dutch artist Joos Peeters has brilliantly painted some of the area’s most important monuments, transcribing passages from the novel in the author’s own handwriting.

From the Consorzio di Bonifica, to the Town Hall up to Palazzo del Vescovo (Bishop’s Palace), built in the 9th century on the commission of the Abbot of Pomposa, which since 1978 has been the seat of the municipal library, up to the boundary wall of the Volano, a Po river branch, and many other interesting locations, the Bassaniano Route accompanies the visitor on a journey suspended between reality and literary fantasy, which goes as far as the building of the Pomposa Abbey and the ancient village of Borgo di Volano.

A treasure trove of art, faith, culture and millenary history, Pomposa Abbey, described as the “monasterium in Italia princeps” by Guido Monaco, the inventor of musical notation, was a powerful centre of knowledge, set in the heart of the Po Delta, as well as a nerve centre for Roman pilgrims. In 1001, the the title of Imperial Abbey was conferred to Pomposa Abbey which reached the heights of its prestige, increasing its power and becoming a leading centre for Christian spirituality and culture of the period. If Giotto left his mark on the frescoes in the abbey chapter, no less significant is the figure of Saint Peter Damian, who lived Pomposa Abbey with Saint Guido degli Strambiati. On the occasion of the eighteenth anniversary of the death of Dante Alighieri, who, during his last journey from Venice to Ravenna, stayed for a short period in the abbey complex, the Municipality of Codigoro has planned a rich programme of events to better celebrate the figure of the Supreme Poet. The entire municipal territory includes the Po di Volano river branch, which runs through its urban centre, but also the vast wooded and pinewood areas of the Po Delta, up to the Adriatic Sea, thanks to the small port of the ancient village of Volano. It is a jewel in which environment, history and monuments coexist in harmony.

Facing the left bank of the Po di Volano, near the Torre della Finanza, the brackish reserve of Valle Canneviè-Porticino catches the eye of those passing along Provincial Road 54. Considered as part of the estate of Duke Alfonso I d’Este since the 16th century, the valley covers 64 hectares of raised land and stretches of water crossed by reeds, rushes, tamarisks and shrubs. At the ends it is bordered by old huts, once used to store fishing equipment. The Canneviè-Porticino valley reserve, a natural paradise within the Po Delta Park, is rich in white, red and grey herons, as well as pink flamingos, wigeons, black-winged stilts, birds of prey, mallards, shelducks and many others. It is included in the list of wetlands that are subject to annual censuses of aquatic avifauna. Transformed into a natural set in 1958 by director Aglauco Casadio, the reserve was made famous and appreciated by big screen audiences thanks to the film Un ettaro di cielo (Piece of the Sky), starring Marcello Mastroianni and Rosanna Schiaffino. A few years earlier, however, in 1954, Mario Soldati, inspired by its brackish environment, had shot some scenes of the blockbuster film La donna del fiume (The River Girl), starring Sophia Loren and Rick Battaglia, in Canneviè.

Standing in the river and delta setting of Volano is the imposing quadrangular shape of the Torre della Finanza, a building erected at the beginning of the 18th century as a river customs post at the entrance to the sea. The Torre della Finanza, which takes its name from the Guardia di Finanza (Financial Police), who occupied it and set up a barracks there in the last century, not only monitored commercial traffic by water, but also performed defensive functions in the Po Delta area. Transferred to the Municipal Administration by the Agenzia del Demanio (State Property Agency) under federalism, today the Torre della Finanza, renovated thanks to European funds, hosts exhibitions, institutional events, small concerts and themed dinners. From its windows you can see the reserves of Valle Nuova and Valle Bertuzzi and admire the magnificent pink flamingos that have chosen them as their home.

The local zero kilometre products include rice, pumpkins, tomatoes and potatoes, but also the fine wines of its sandy soil bring the Codigoro name to all the local markets and beyond! The process manufacturing sector is also a major player on the Italian and European scene. Grandi Riso, the fourth largest rice producer in Italy, and Conserve Italia, a factory dedicated to processing tomatoes and canned fruit, are two centres of excellence in the Emilia-Romagna and national production network. In order to develop and promote local specialties, the Municipality of Codigoro, in close synergy with local voluntary sector, organises festivals and events that attract gourmets, visitors and the curious from all over the world every year. The Pontelangorino Pumpkin Festival (end of August), the Tomato Festival (during the Santa Croce Fair in Codigoro), the Rice Festival and the Potato Festival (between September and October in Pomposa), and the Boiled Meat Festival (during the San Martino Fair in Codigoro), have always been authentic flagships of the Codigoro gastronomic tradition, which were only postponed in 2020 due to the pandemic.
The Municipality of Codigoro is one of the founders of the Città della Patata (Potato City) network, which brings together some twenty local authorities from all regions, dedicated to the cultivation and gastronomic promotion of the tuber.
The local wines from the sandy soils surrounding Pomposa Abbey are also renowned all over the world and inextricably link the name of Codigoro to the presence of the Benedictine monks who, in the early
Middle Ages, started a winemaking tradition that has been handed down over the centuries. Today that wise tradition is carried on with passion by the Scalambra family, in the Corte Madonnina di Pomposa farm. 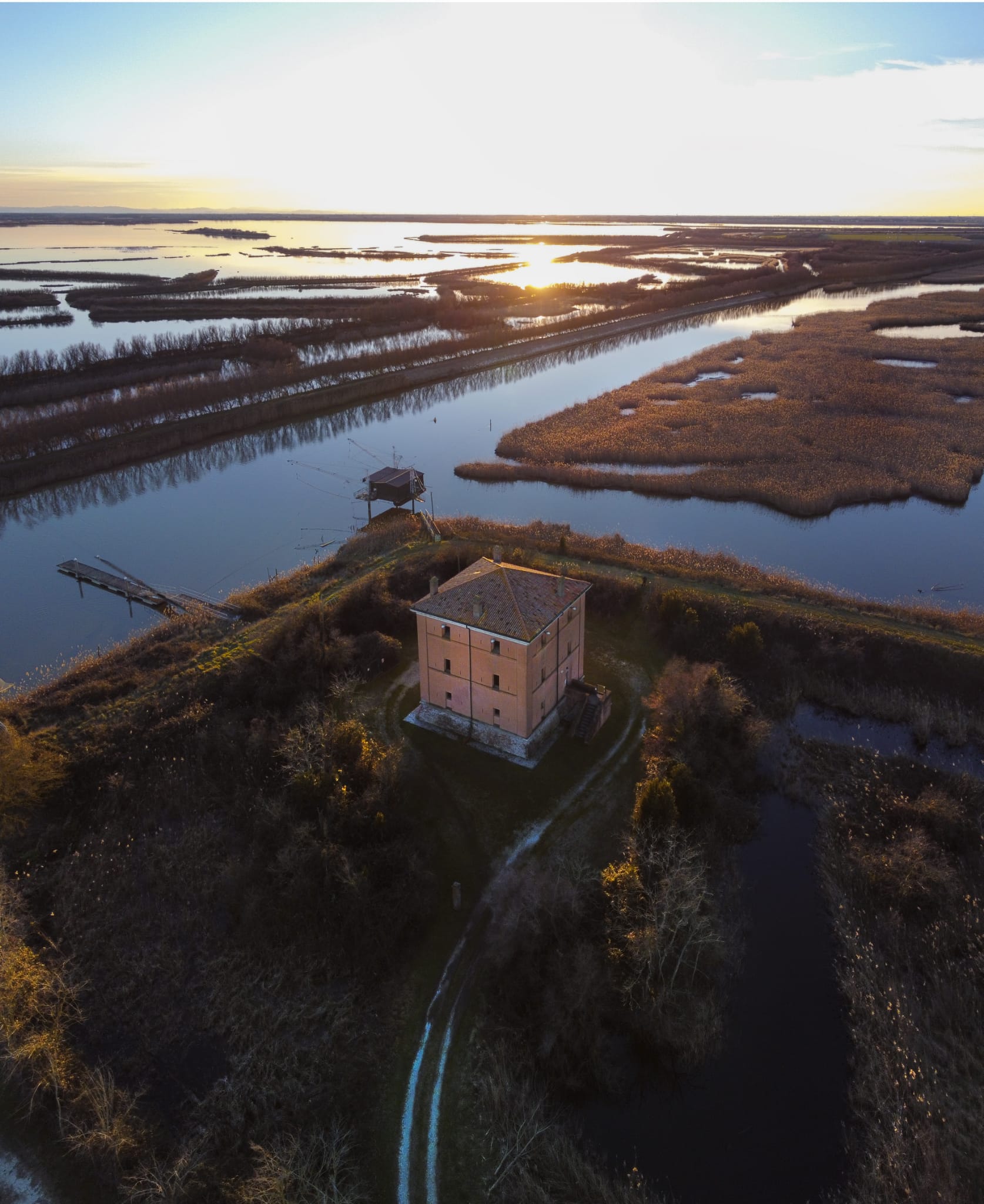 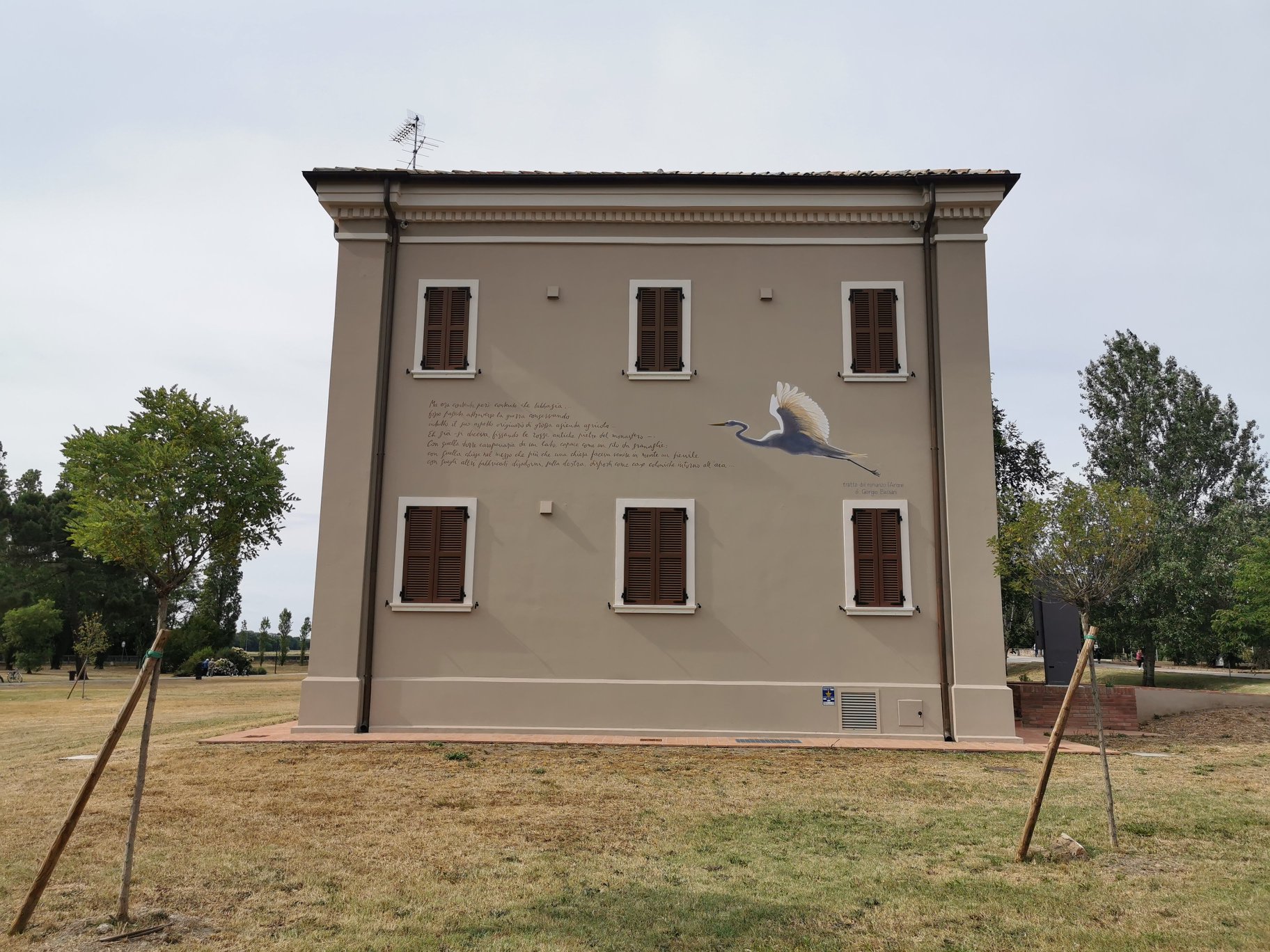 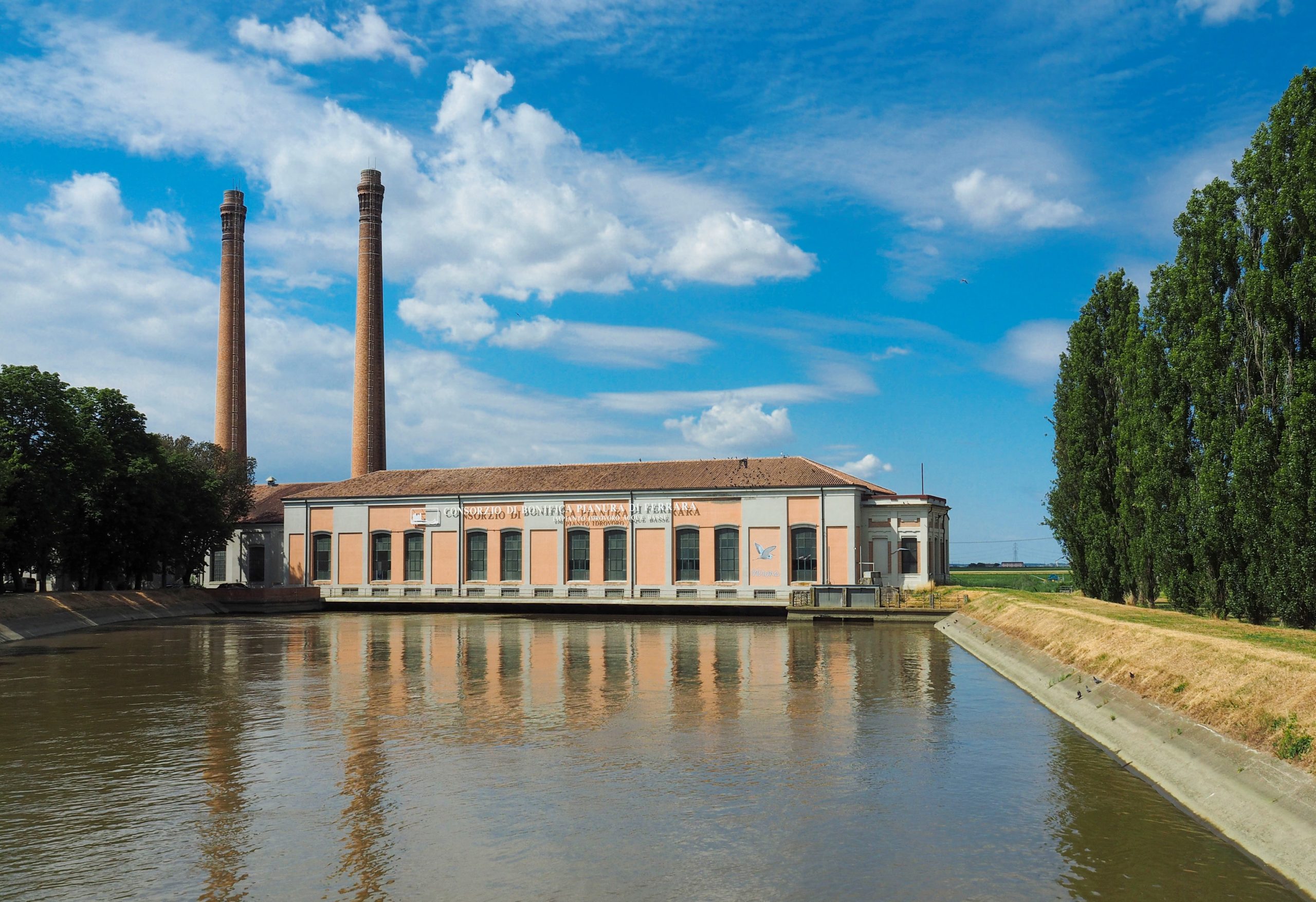 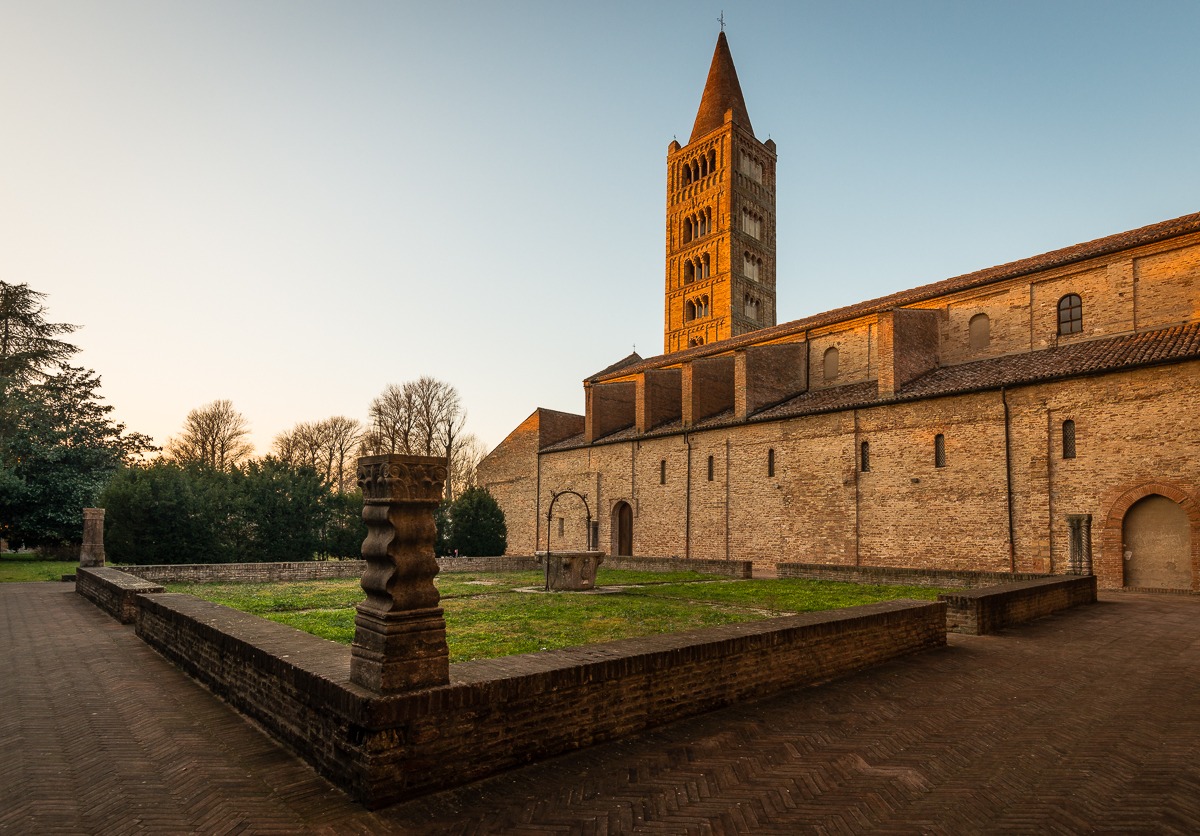