Civitella di Romagna (from “Civitatula”, the diminutive of the Latin civitas) a municipality of about 3,800 inhabitants, rises among the hills, 219 metres above sea level, along the Bidente valley. Known for its traditional products, cherry growing and cattle breeding, it is characterised by a discrete network of crafts and small businesses that combine the area’s primary traditional vocation, agriculture, with more recent tourism services (agritourism, quality viticulture). The origins of the town date back to ancient times, with evidence of Celtic settlements going back to at least the 5th century BC.
An area linked in Roman times to the centre of Mevaniola (Galeata), with its “walled village” built before the year 1000, during the 10th century AD, it became a military outpost. It was then subject to the archiepiscopal seat of Ravenna and for a long time became part of the estate of the abbots of Sant’Ellero.
The object of bitter disputes between papal powers, Florentine lords and noble families from Romagna (the Counts of¬ Giaggiolo, the Manfredi of Faenza and the Malatesta), over the centuries it was subjected to various raids an¬d occupations, keeping its historical identity intact until it was absorbed by the Papal States in the mid 16h century. Buildings of interest include the Clock Tower, rebuilt in 1920 in neo-Gothic style, and the Sanctuary of Suasia.
Worth mentioning is the village of Cusercoli, which is practically a gateway to the middle Bidente valley. The ancient “Clusum Herculis” (Hercules’ Lock) rests on a rocky spur which crosses over the valley, forcing the river to take a sharp diversion. On top of the spur is the 13th-century castle, which looks out over the valley like a majestic sailboat, while the old town centre clings to its feet. There is a story behind the remains of the medieval Rocca di Giaggiolo, which became the property of the Malatesta family: legend has it that it is linked to the love story of Paolo and Francesca, the protagonists of Canto 5 of Dante’s Inferno 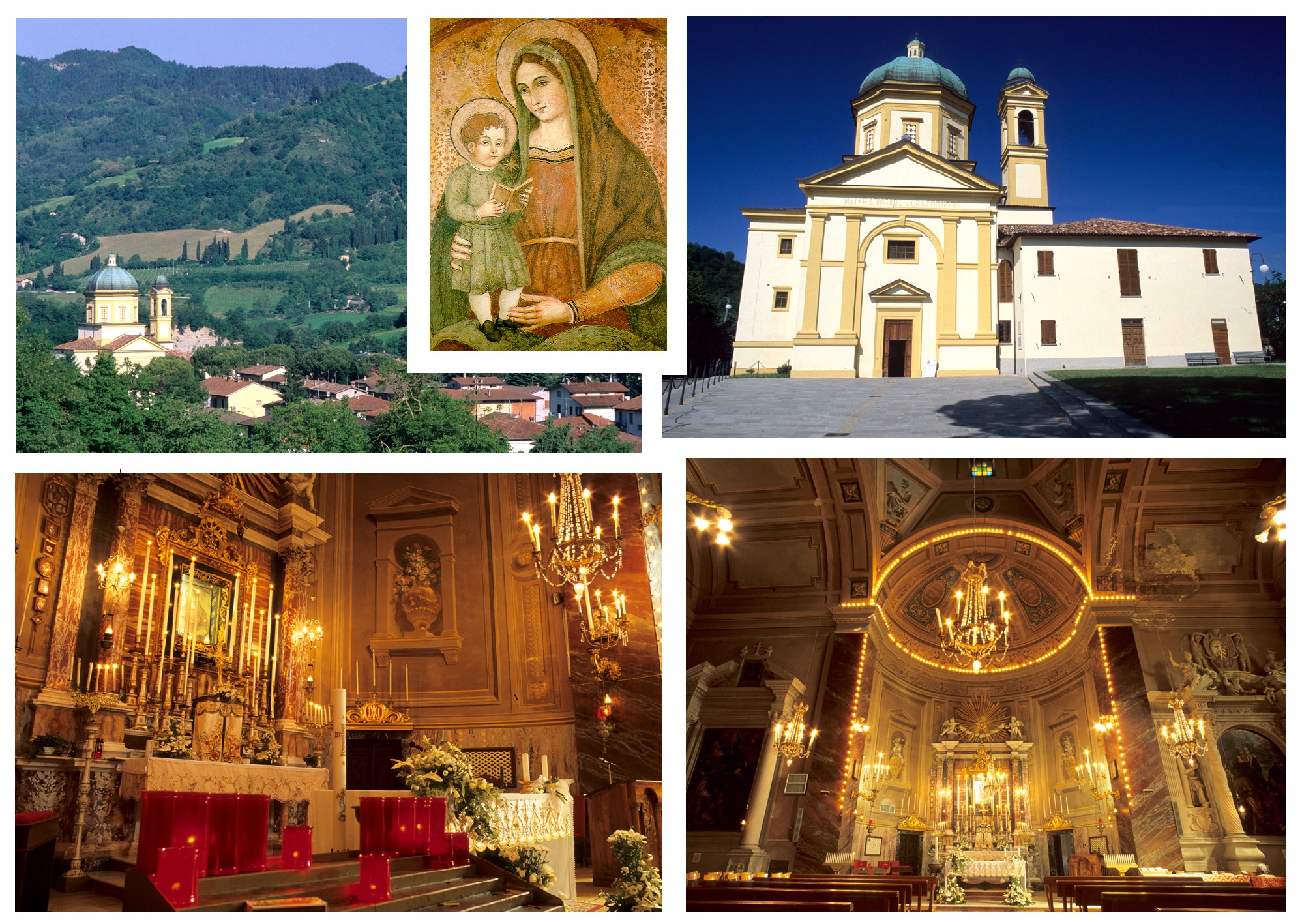 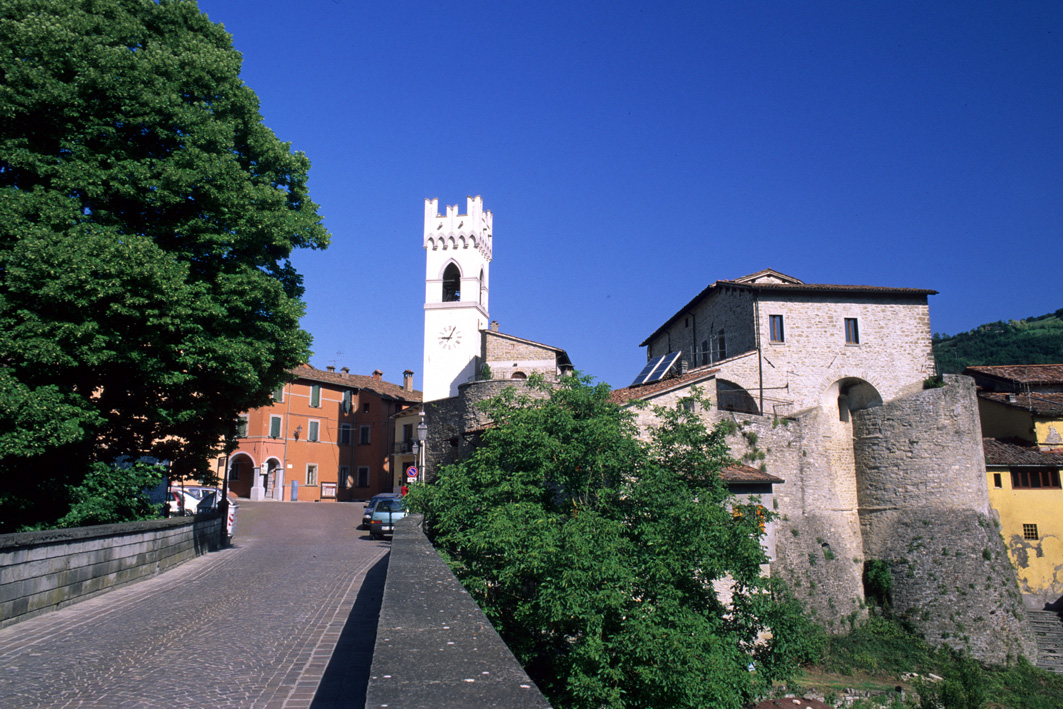 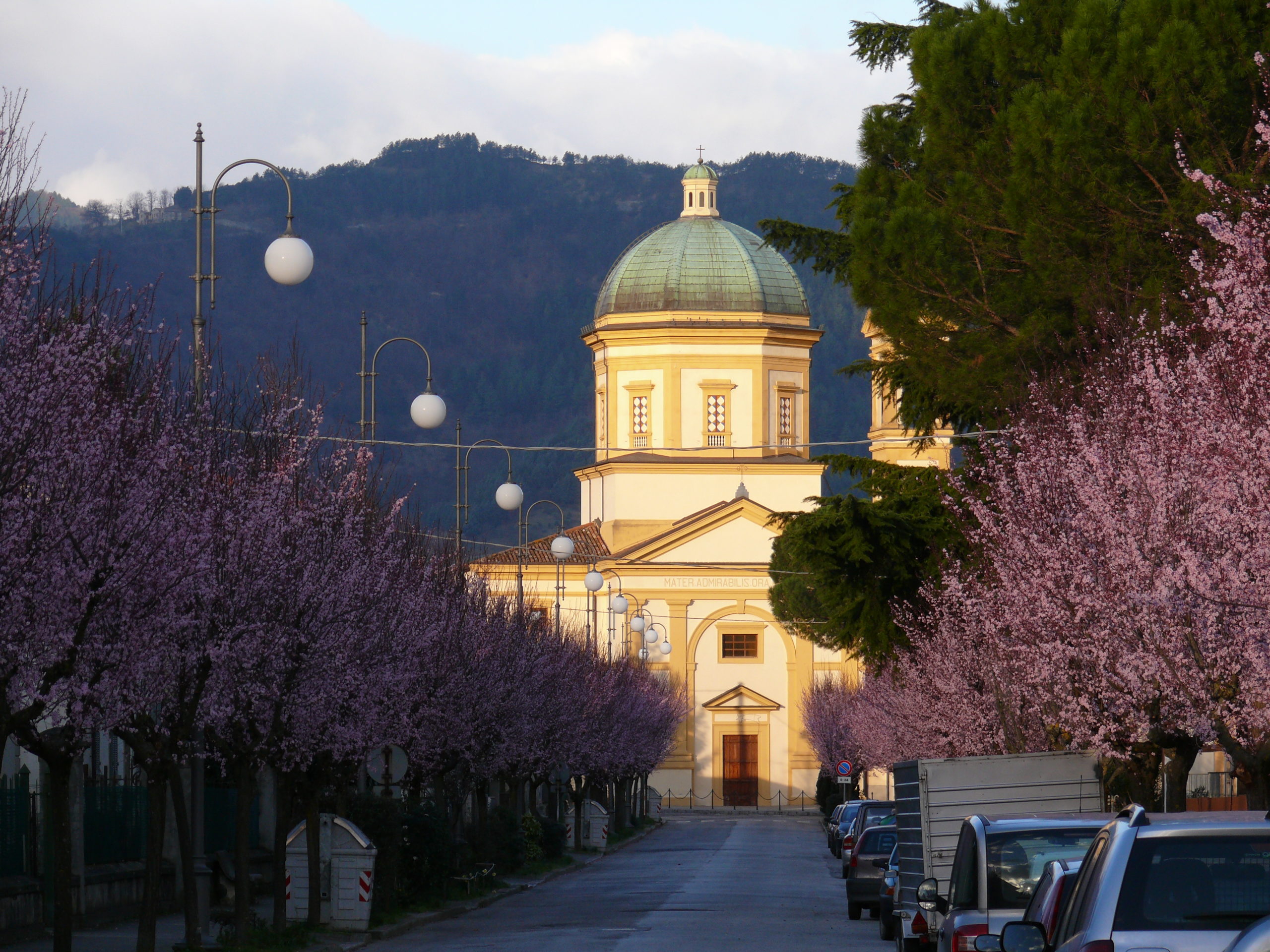 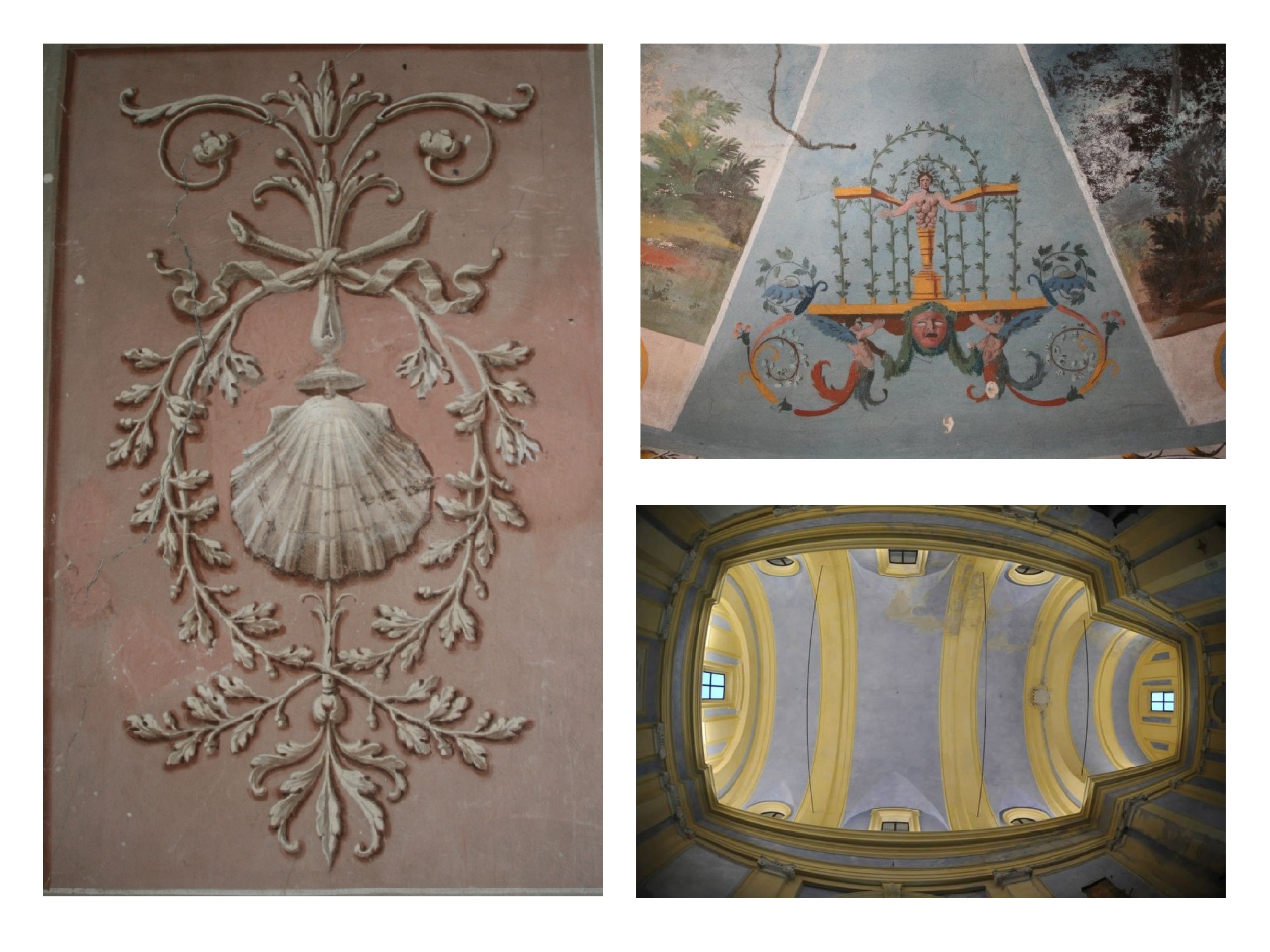 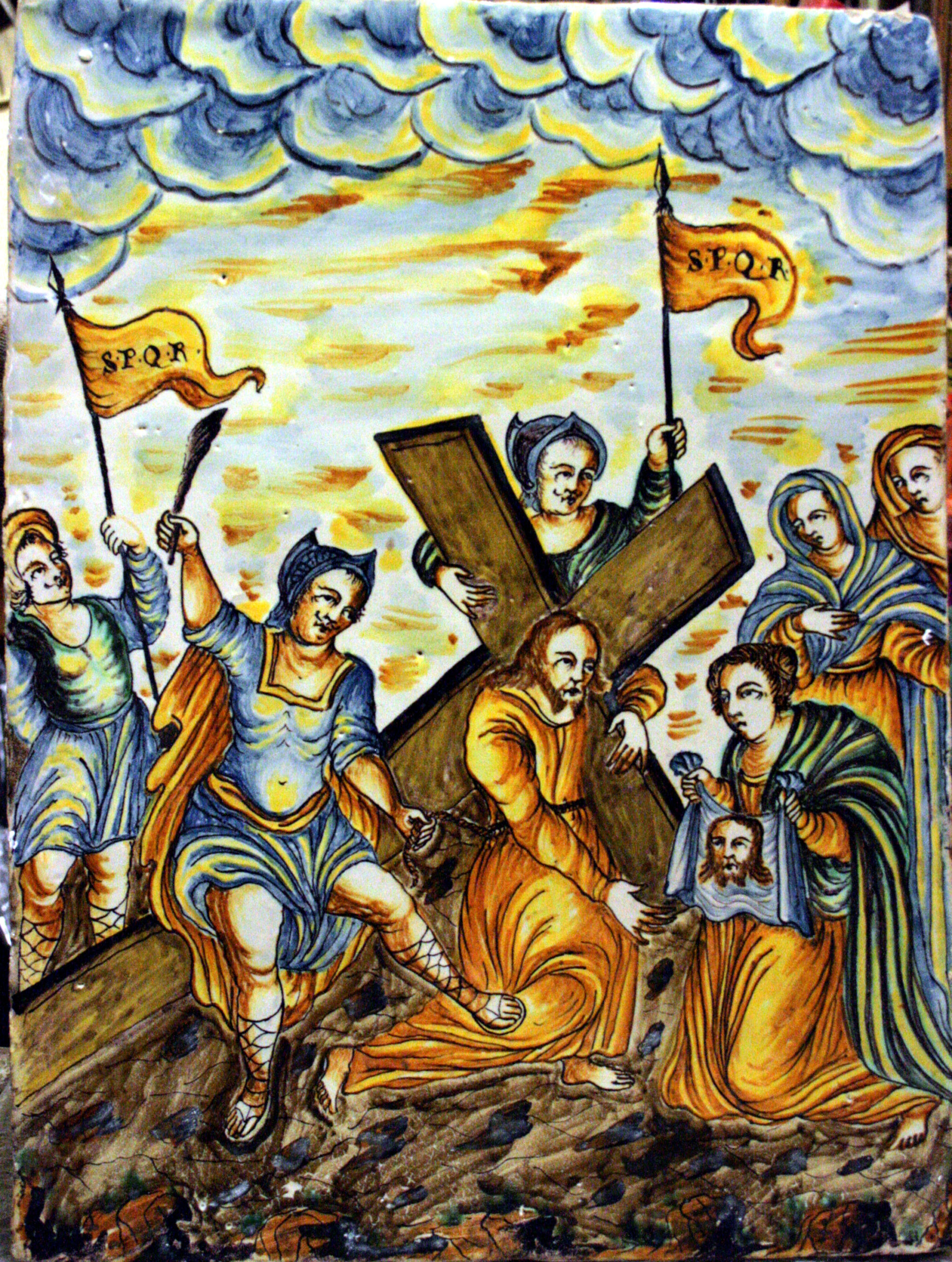 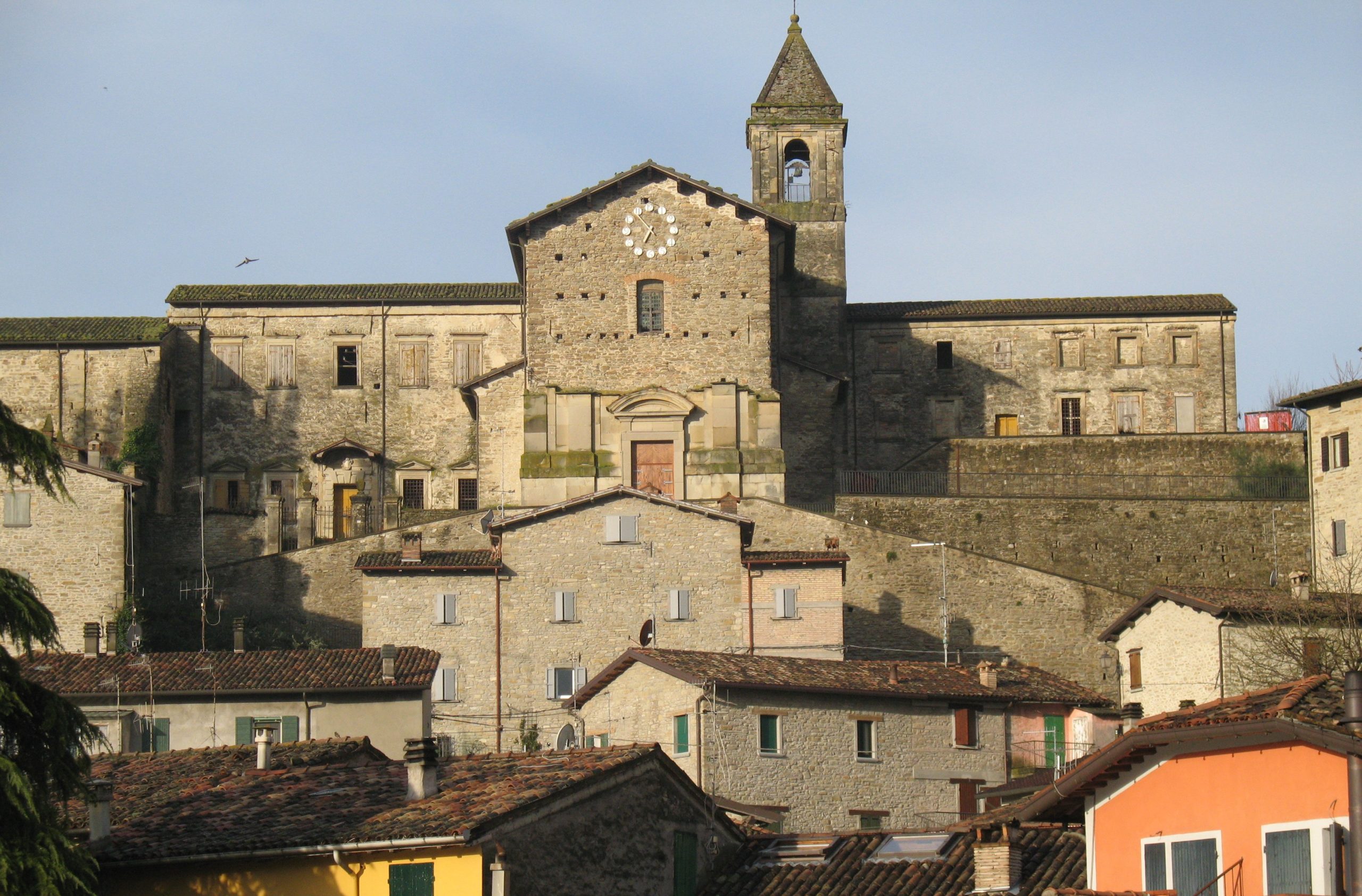 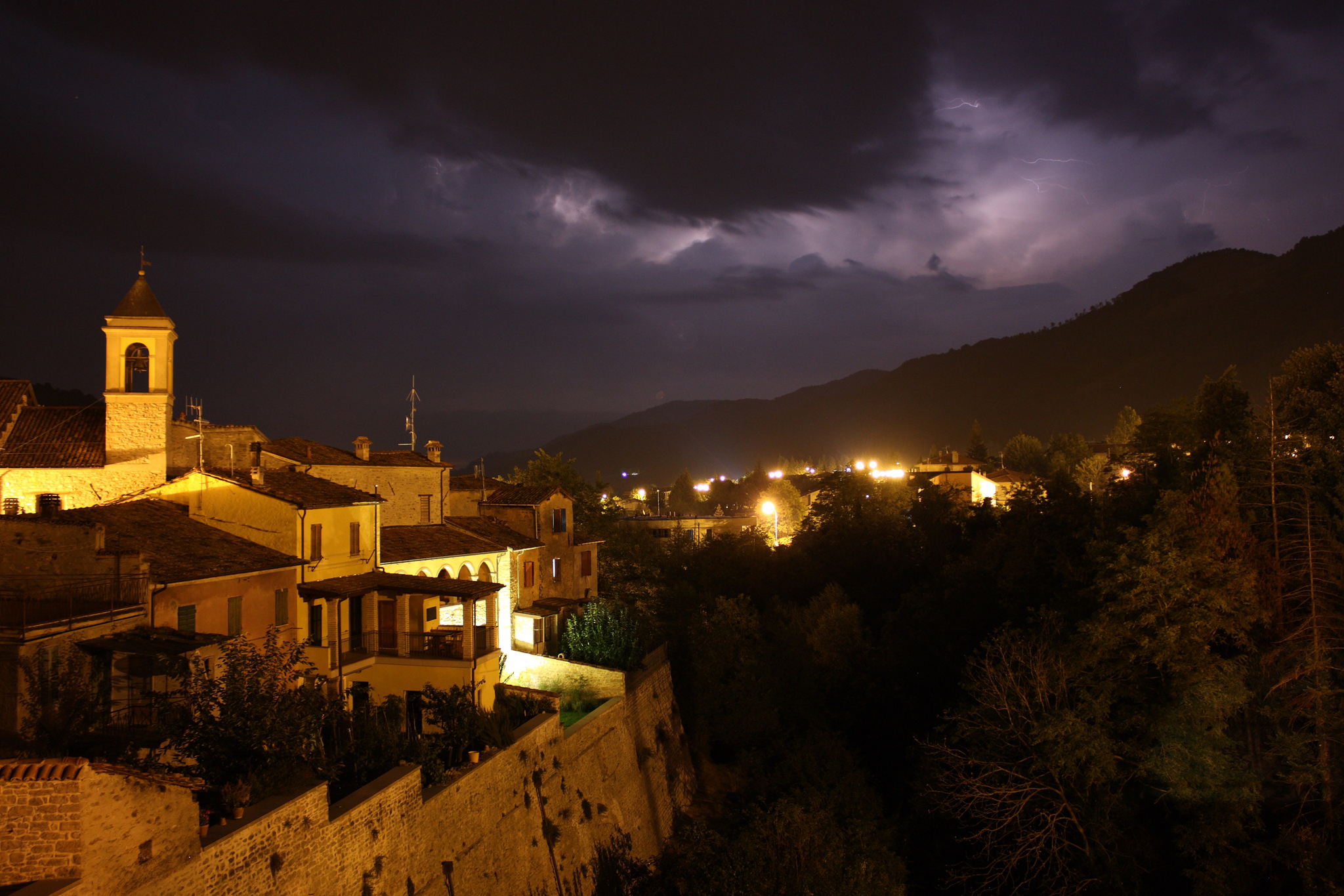 The walled or fortified village

Also known as the Castle, although the individual buildings have been extensively rebuilt, it retains the charm of the medieval urban structure. Here you can see the exact conformation of an ancient fortified village, defended by the towers of the fortress and its overhangs, which plunge into the waters of the Bidente river meandering below.
The fascinating route along the perimeter of the walled ramparts leads to the discovery of buildings and ancient shops among uninhabitable spaces, undergrounds passages and ruined bastions. Highlights include the old Clock Tower, last rebuilt between 1920 and 1930 in neo-Gothic style, and the 17th century Chiesa del Castello (Castle Church), dedicated to dedicated to St Anthony of Padua.

The Santuario was built in the second half of the 16th century to commemorate the miraculous apparition of the Virgin Mary to a poor orphan near the Suasia stream. The building, with its Tuscan Renaissance architecture, has undergone numerous renovations, including the construction of the bell tower in 1760 and the dome in 1928. Inside there are important works of art: the fresco depicting the Blessed Virgin of Suasia, three paintings dating back to the 17th century depicting Christ on the cross with St. John, Mary Magdalene and St. Luke, Madonna and Child with Saints Barbara, Andrew and Lawrence and Madonna and Child with Musician Angels.
The sanctuary is now in the care of the Confraternity of the Blessed Virgin of Suasia.

The Castle, which is part of an architectural complex built in the Middle Ages on a fortified structure from the late Roman period, passed from the Counts of Ghiaggiolo, to the Malatesta, to the Guidi di Bagno until it became the property of the Municipality of Civitella in the 1970s.
At its foot is the ancient village, which still inhabited and can be accessed through two gates. Still visible is the Portaccia gate, next to which stands the “hospitale” that offered refreshment to pilgrims on their way to Rome along the ancient Via Romipeta.
The imposing church of San Bonifacio, rebuilt in 1700, stands out from its façade.
In the Torre della Meridiana there is a permanent exhibition of ceramic tiles representing the Stations of the Cross.

Ceramic works of great historical and artistic value and exceptional rarity, the Formelle, depicting the 14 Stations of the Cross and made around the middle of the 17th century, arrived in Cusercoli at the end of the 18th century at the behest of the Guidi di Bagno Counts.
The 14 tiles have recently been carefully restored, thanks to the work of the Institute of Cultural Heritage of the Emilia Romagna Region in collaboration with the Restoration Laboratory of the International Ceramics Museum of Faenza. They are currently on display in the “Torre della Meridiana” (Sundial Tower) of the Cusercoli Castle, in a special room fitted with modern installations, open to the public on a permanent basis.

The Walled or Fortified Village
A valley with high green walls, between which looms Mount Girone (336 meters above sea level), surrounds the remains of the ancient Civita and the urban development of the modern Civitella di Romagna. 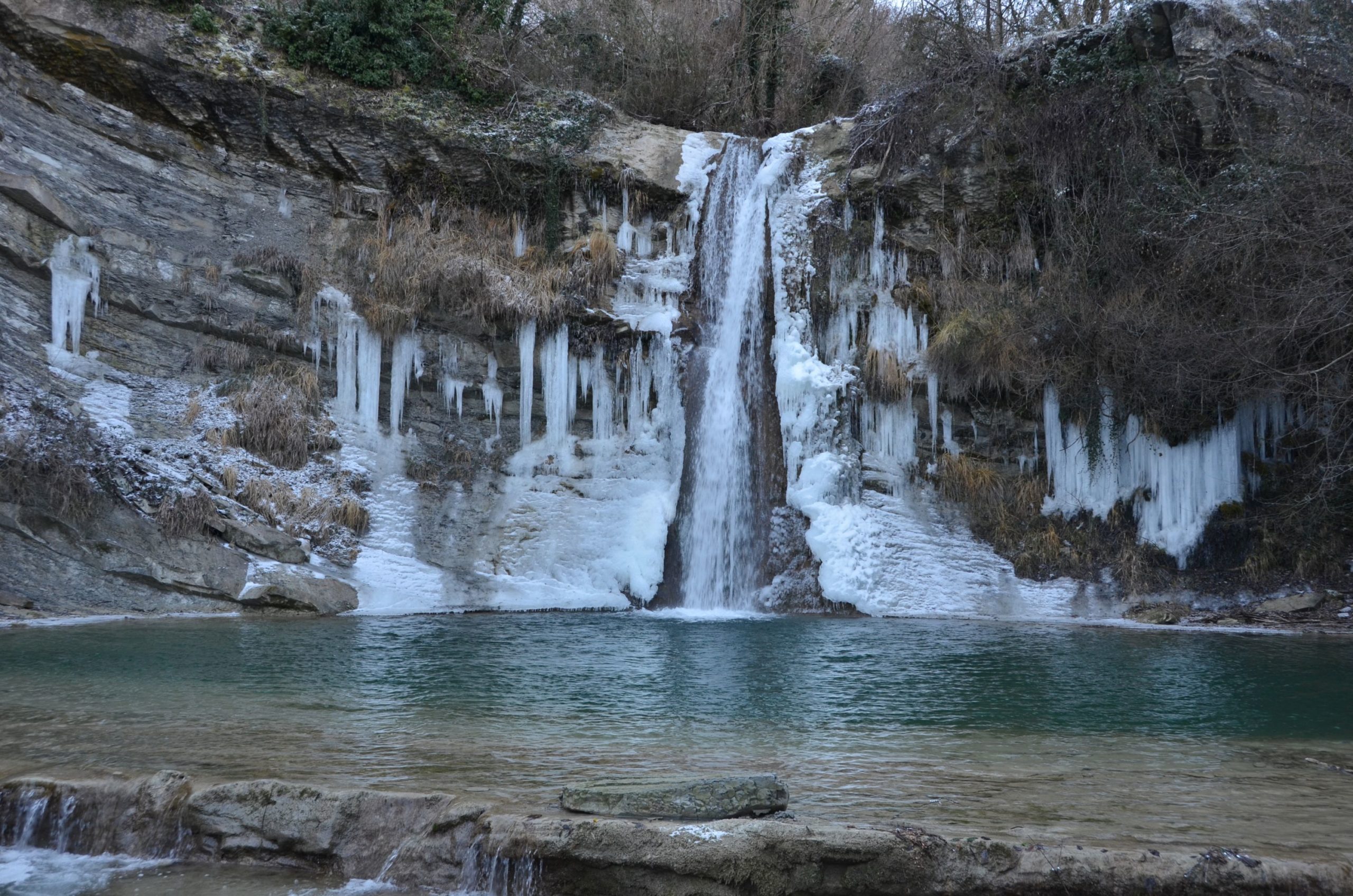 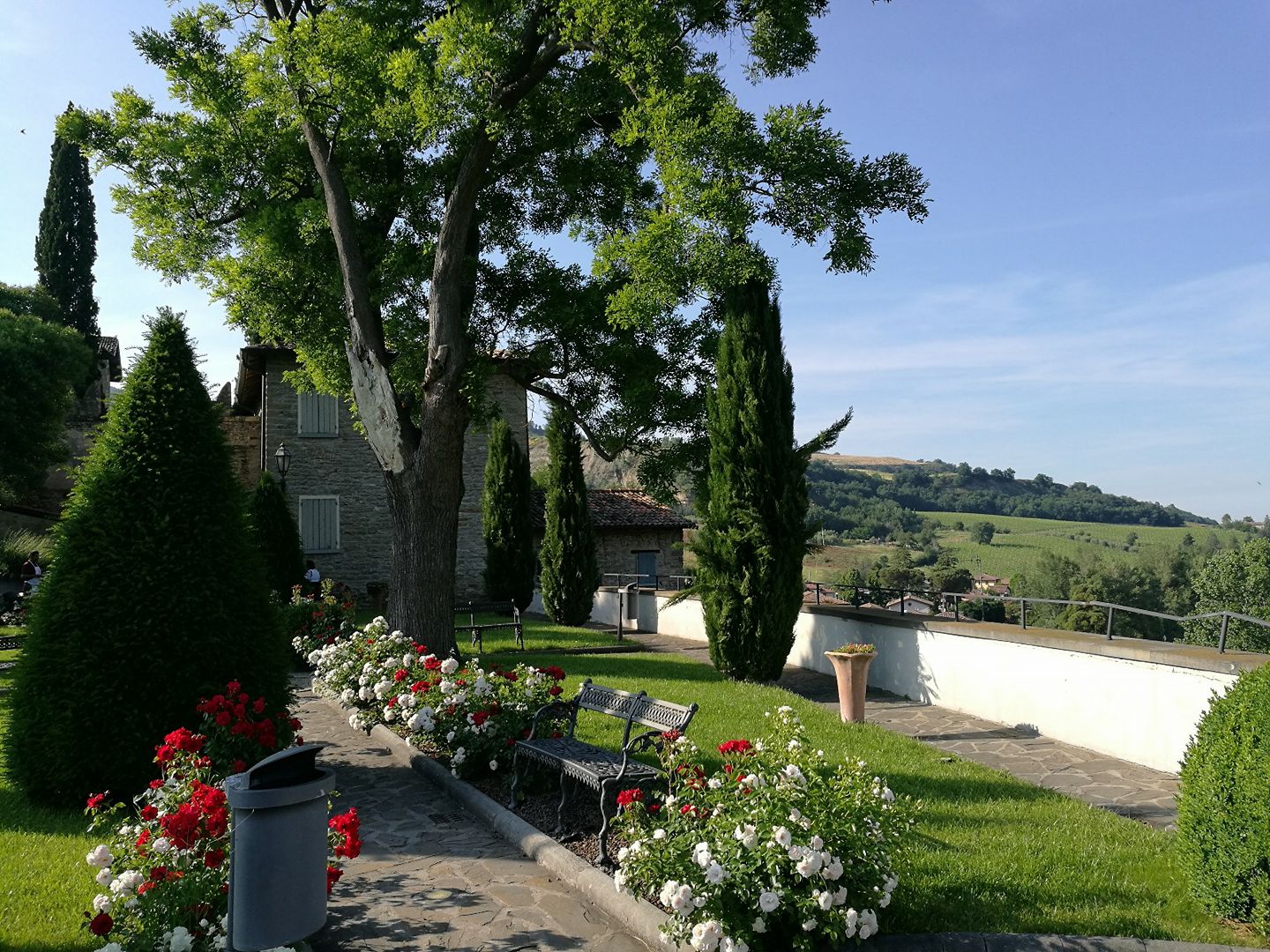 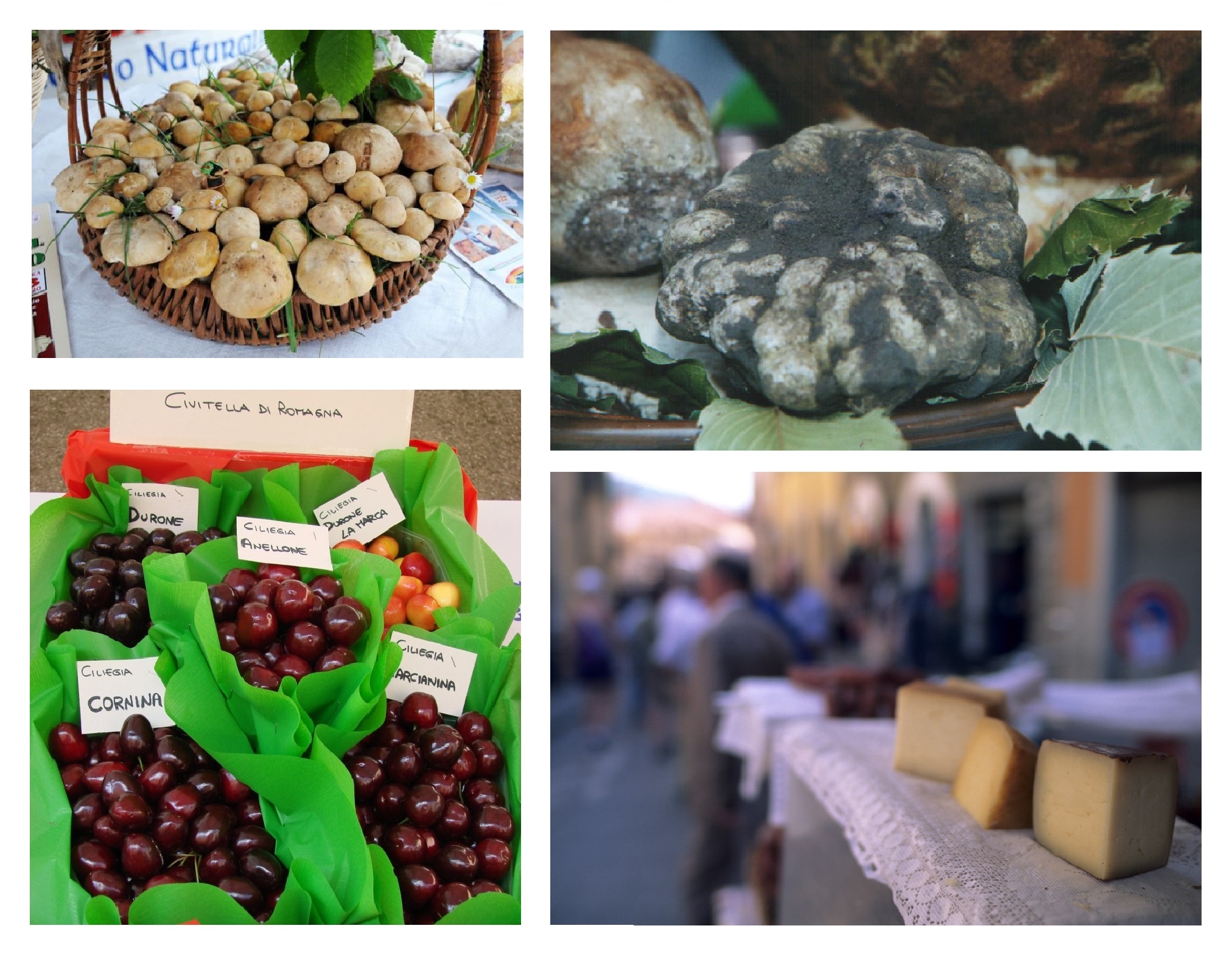 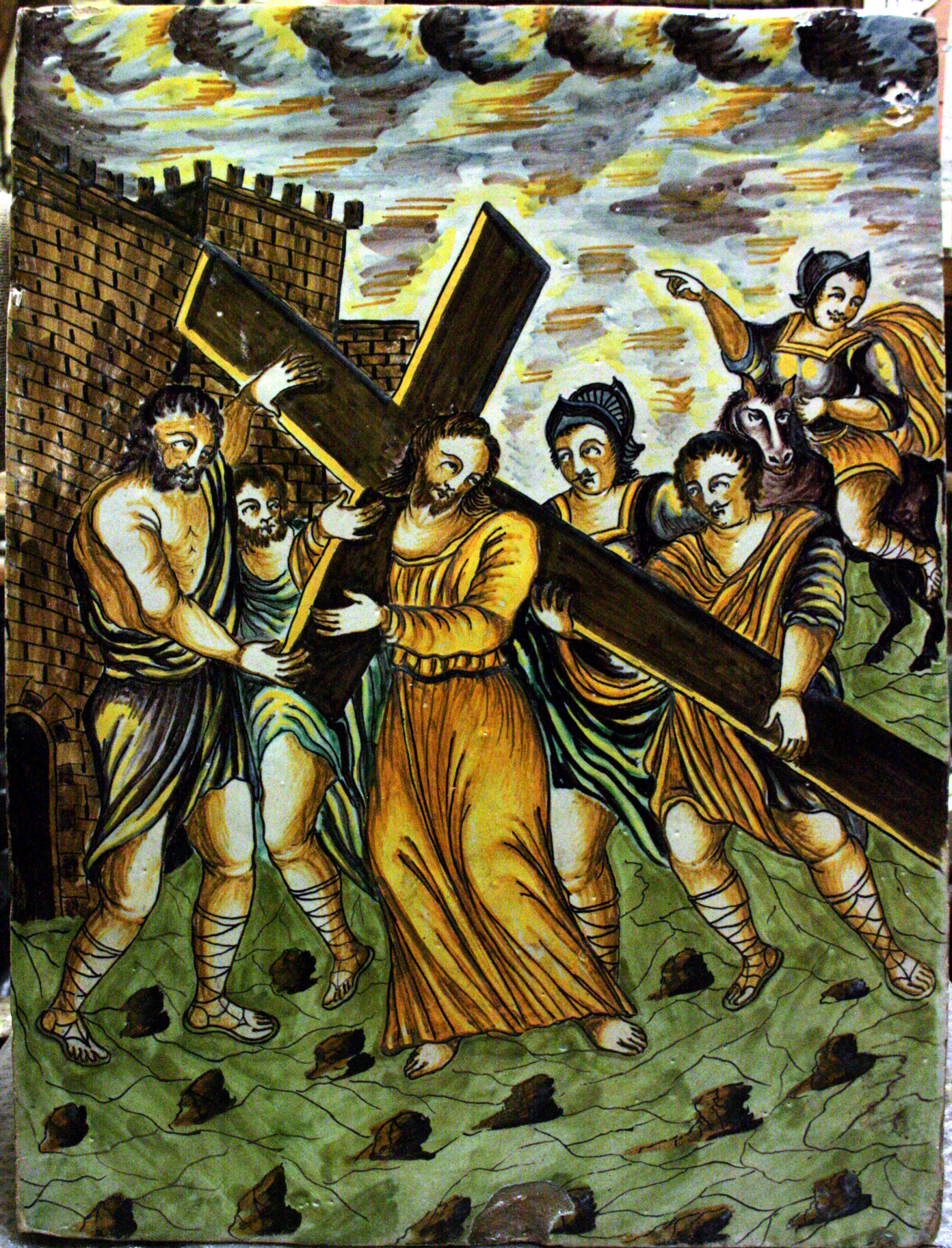 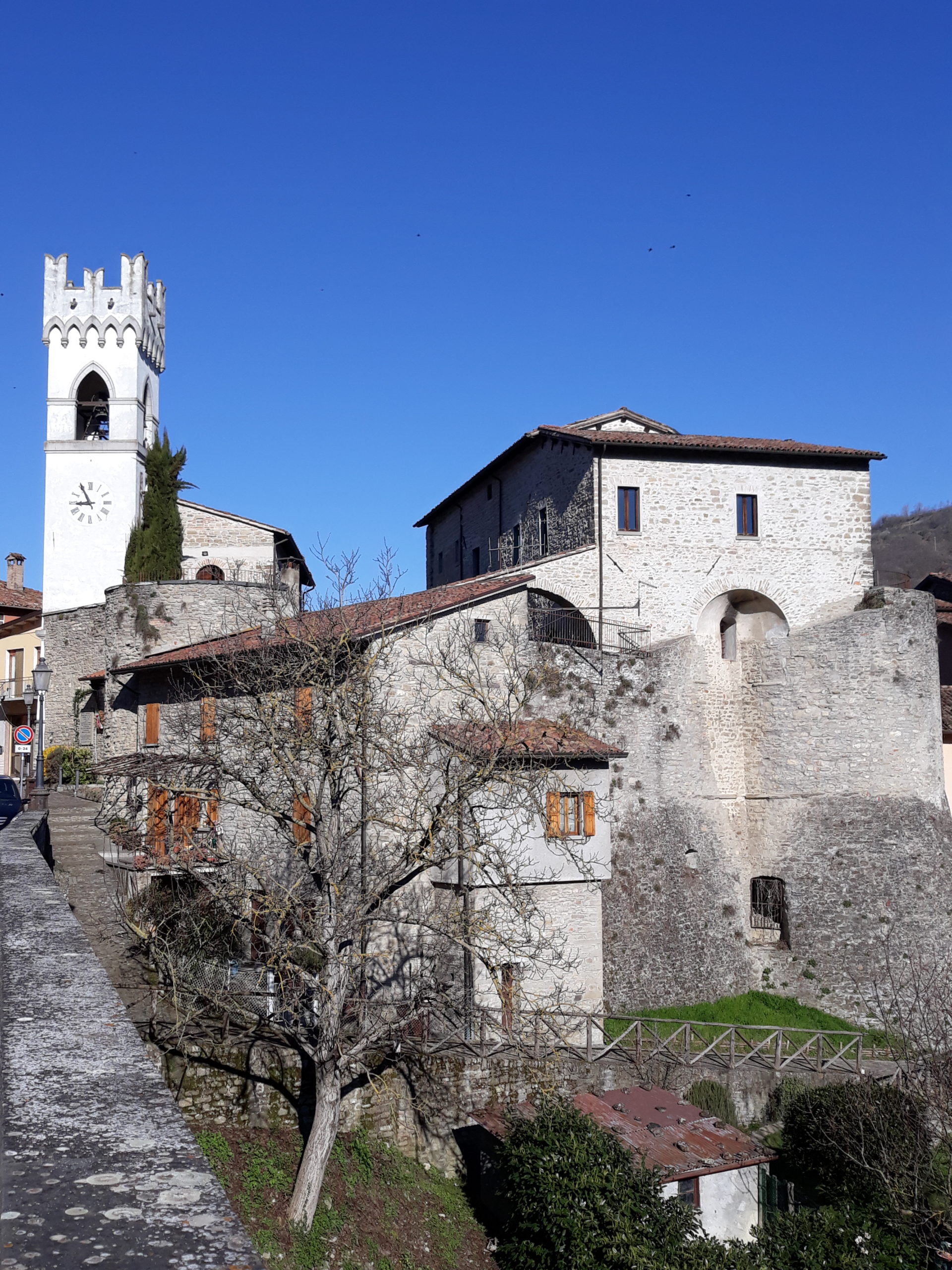