The ancient medieval spa town of Brisighella is one of the most beautiful villages in Italy. It has has been awarded the “Bandiera Arancione” (Orange Flag) certificate by the Italian Touring Club for its landscape and environmental qualities. It is set in the Regional Park of the Vena del Gesso Romagnola, in the Tuscan-Emilian Apennines, along the ancient Via Faentina that connects Florence–Faenza–Ravenna (now also accessible by train). It is notable for its three rocky peaks, the famous three hills, on which stand the Manfredian fortress (14th century), the Monticino sanctuary (18th century) and the so-called Clock Tower (19th century).
Its origin dates back to the 13th century when Maghinardo Pagani da Susinana, lord of the area, had a defence tower built in 1290 on the rocky spur where the clock tower stands today, to control trade and passages from Ghibelline Romagna to Guelph Florence. During his long military career, Maghinardo fought on the side of the Guelphs of Florence in the Battle of Campaldino in 1289, in which Dante Alighieri also famously took part, but Maghinardo was then a long-time champion of the Ghibellines of Romagna, in alliance with the Ordelaffi of Forlì. This is why it can reasonably be said that he was Guelph in Tuscany and Ghibelline in Romagna. This discrepancy was a great source of irritation to the Supreme Poet. In Canto XXVII of the Inferno, in which Dante referred to him, without naming him explicitly, as the lord of Imola and Faenza, he stigmatised his political behaviour, considering it hypocritical:
“The cities of Lamone and Santerno are led by the young lion of the white lair; from summer unto winter, he shifts factions” (Dante Alighieri, Inferno, Canto XXVII, 49-51)
At the beginning of the 14th century the territory passed into the hands of the Manfredis of Faenza, who remained in charge of the city until the end of the 15th century. In 1500 Brisighella was conquered by Cesare Borgia, then, between 1503 and 1509, it entered the territories administered by the Republic of Venice. 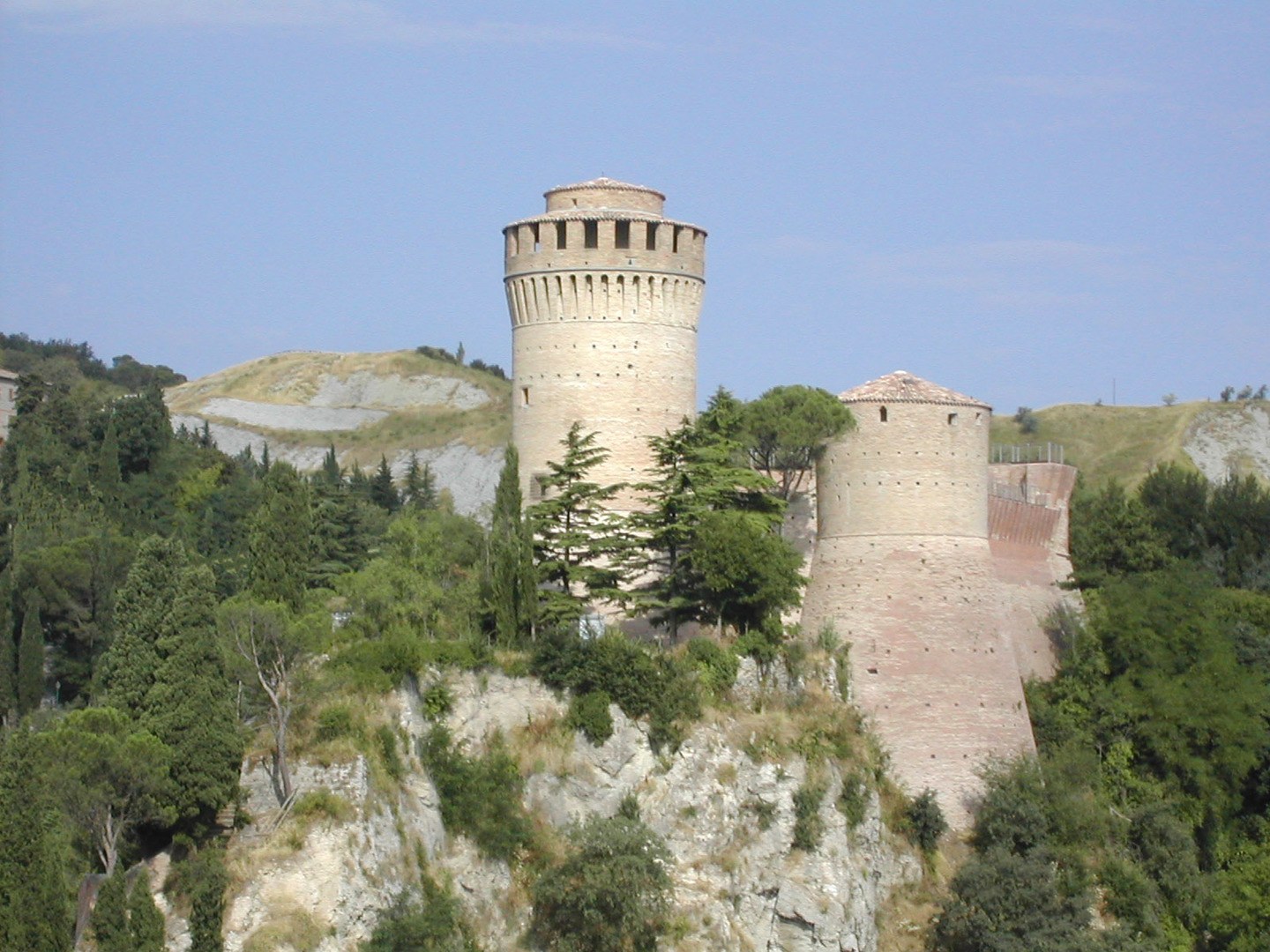 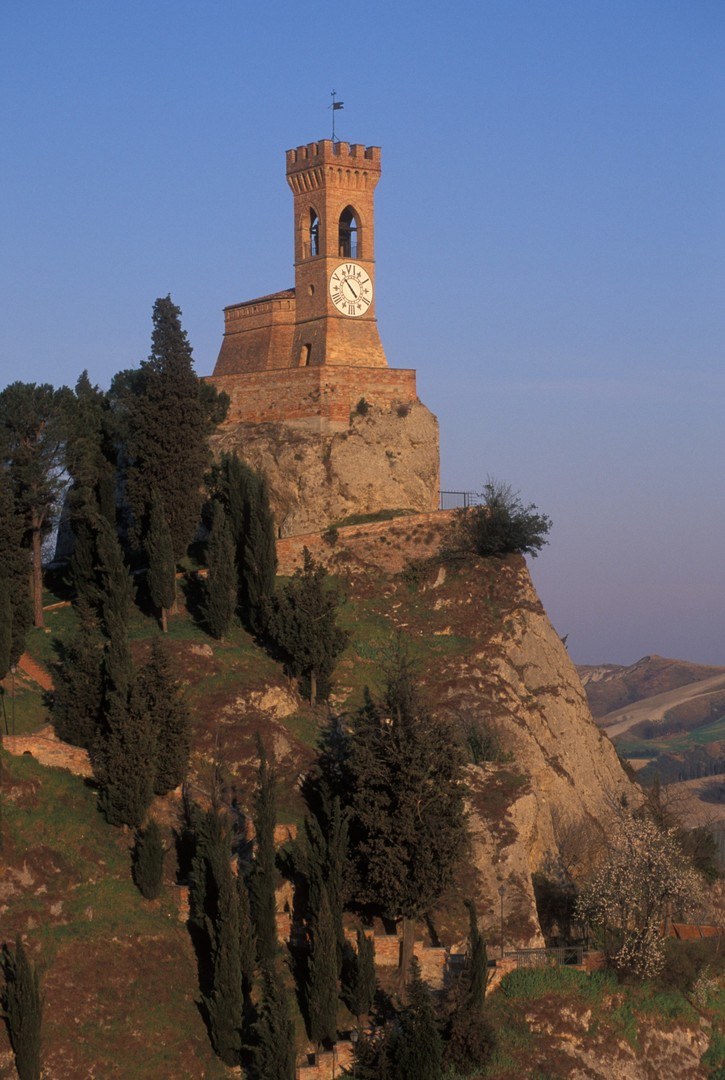 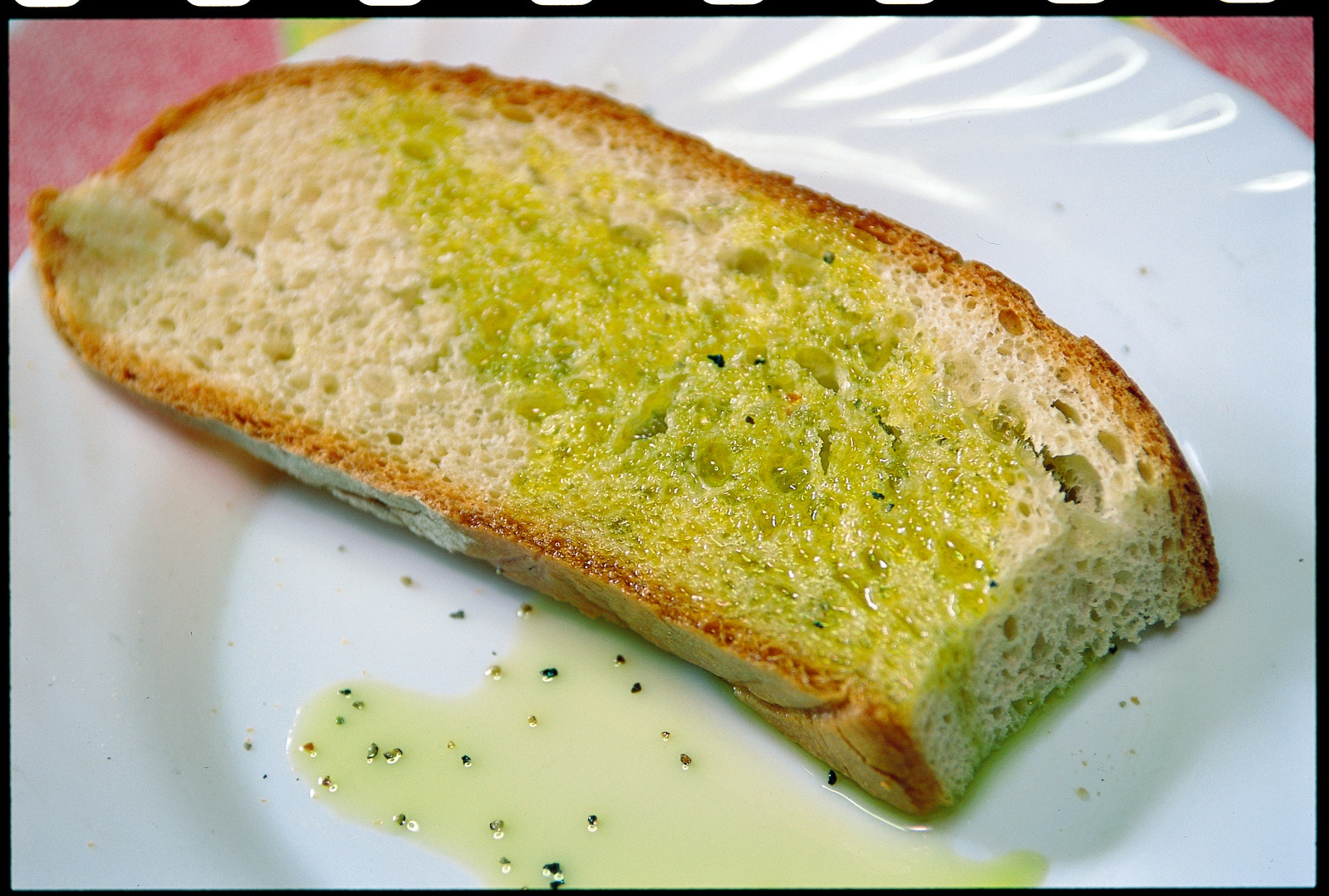 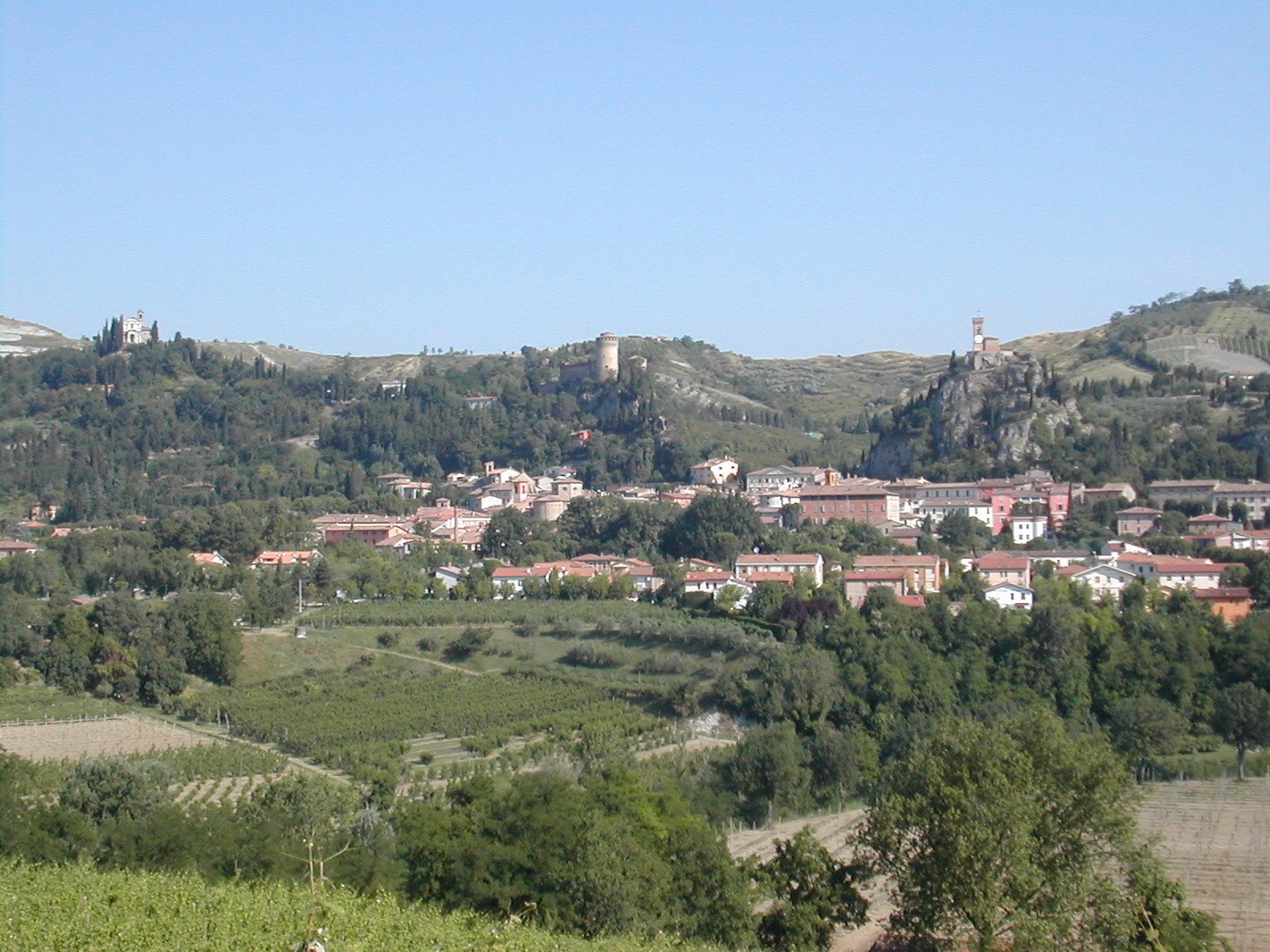 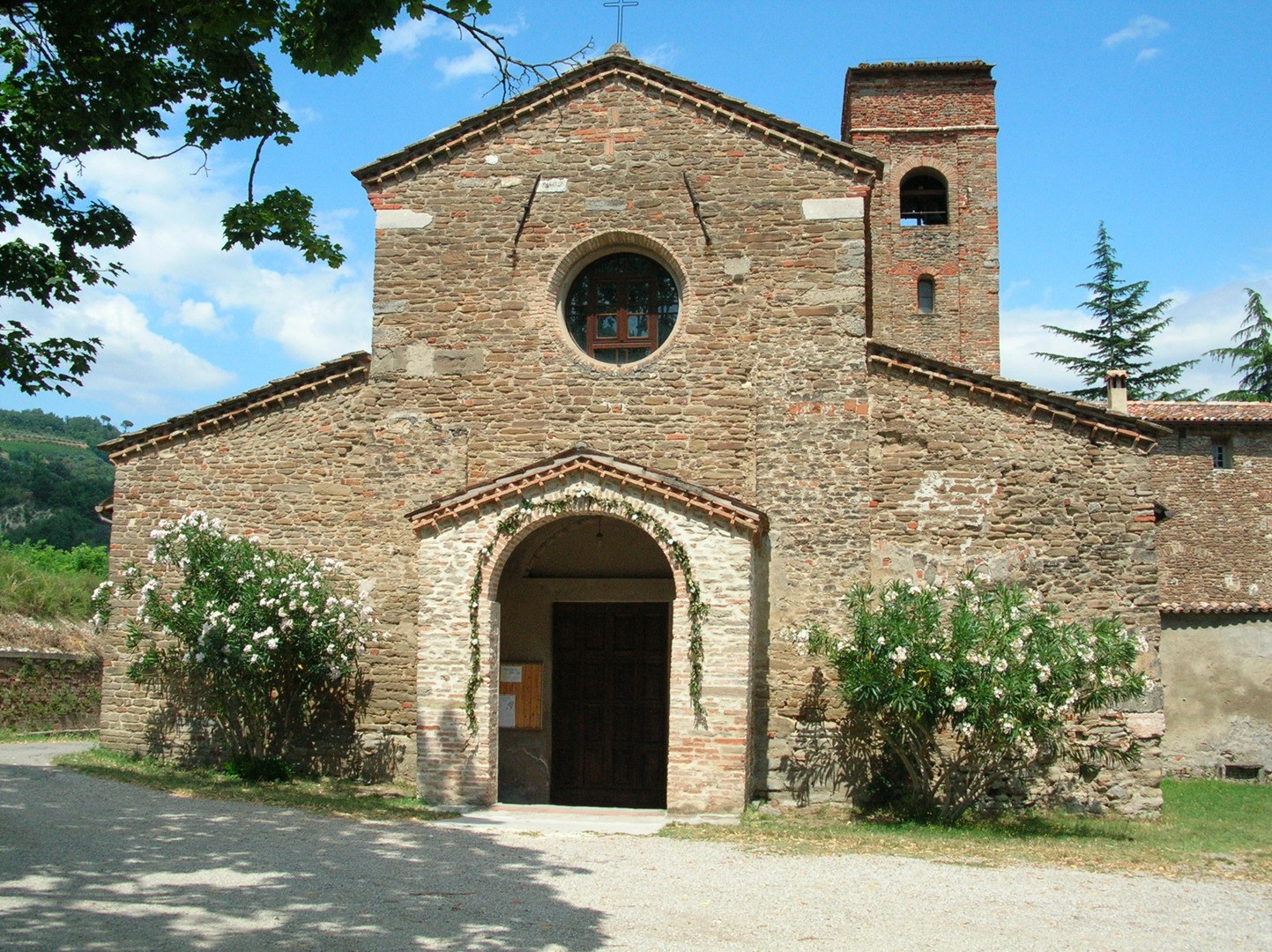 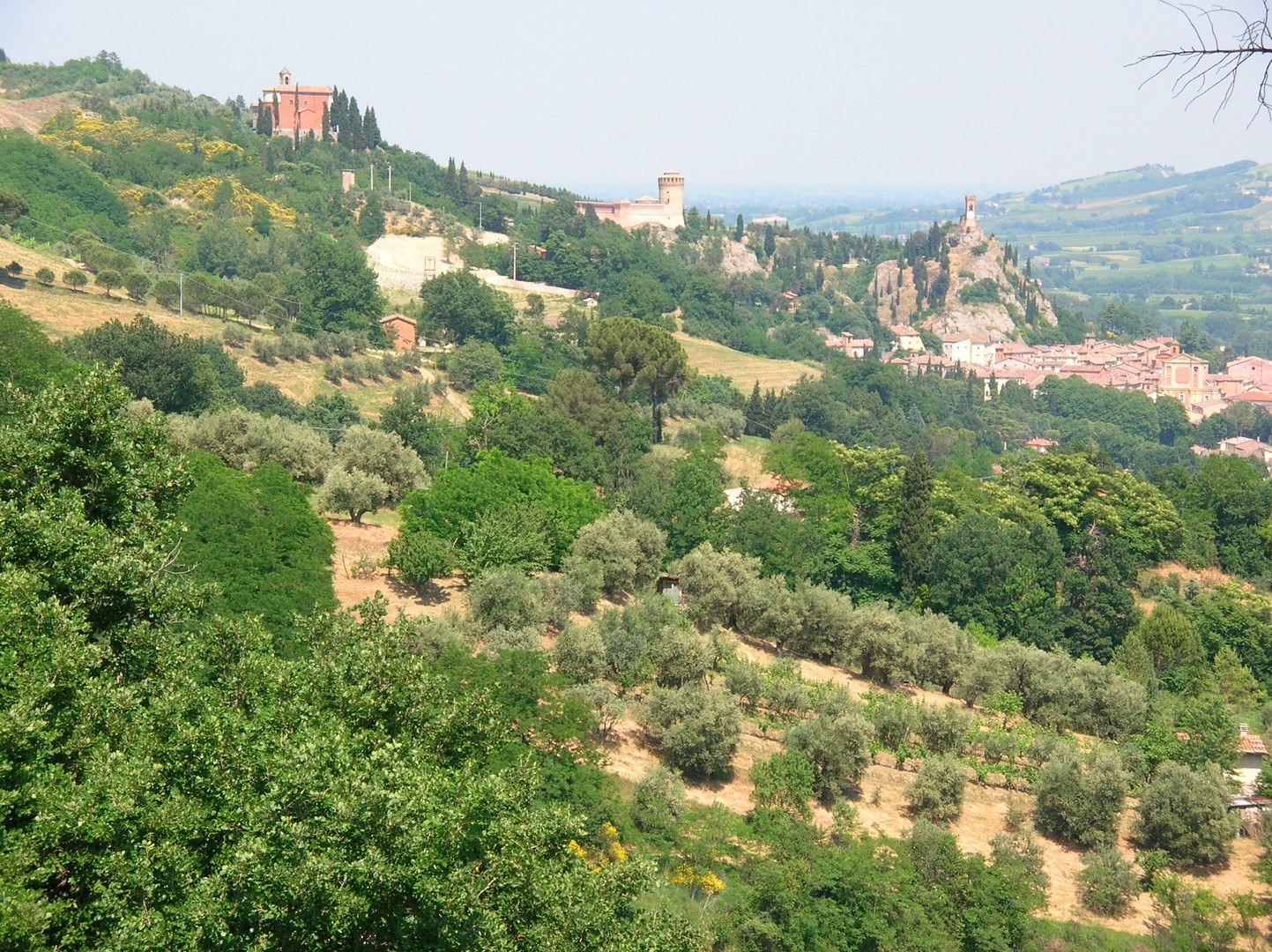 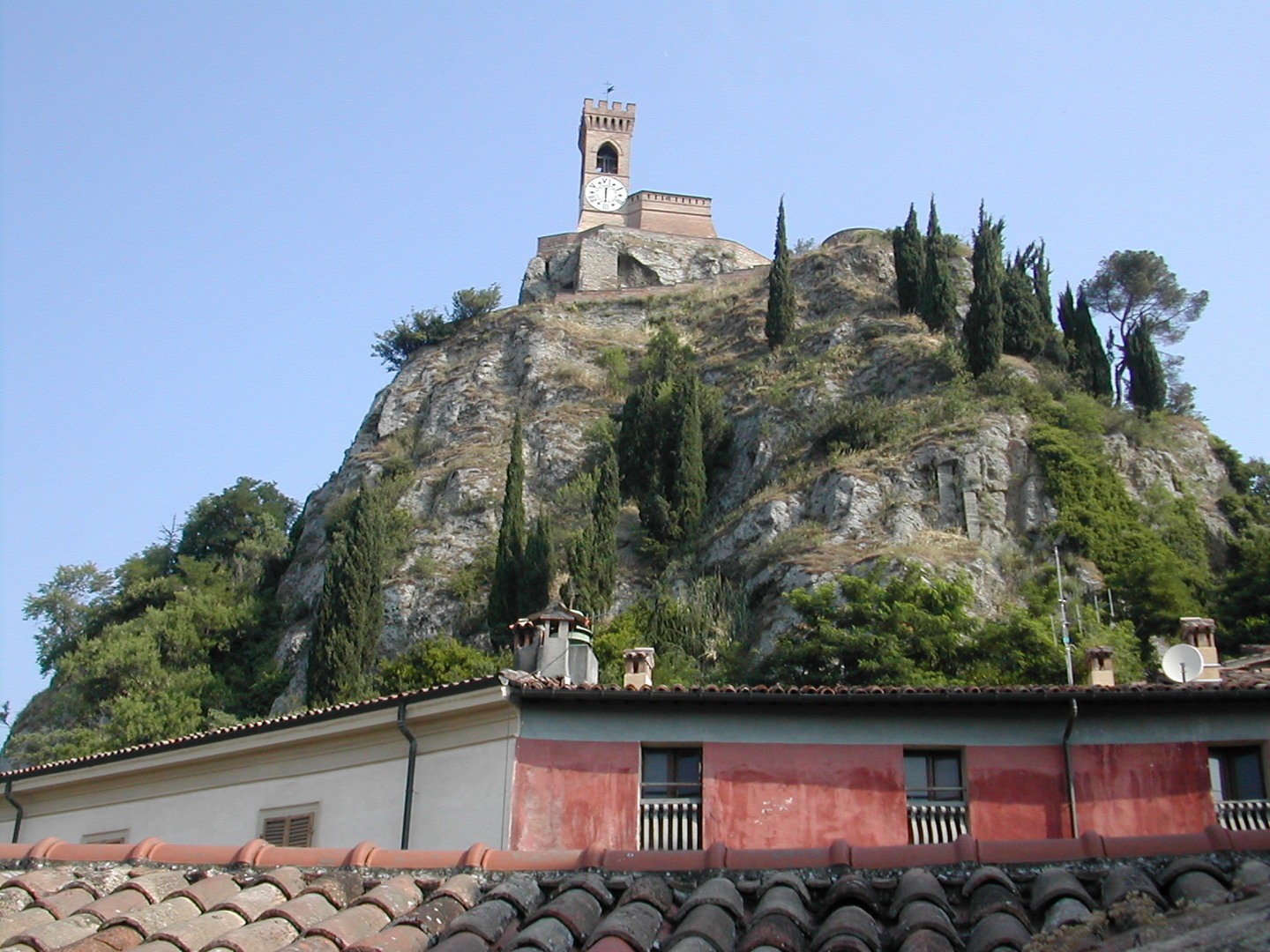 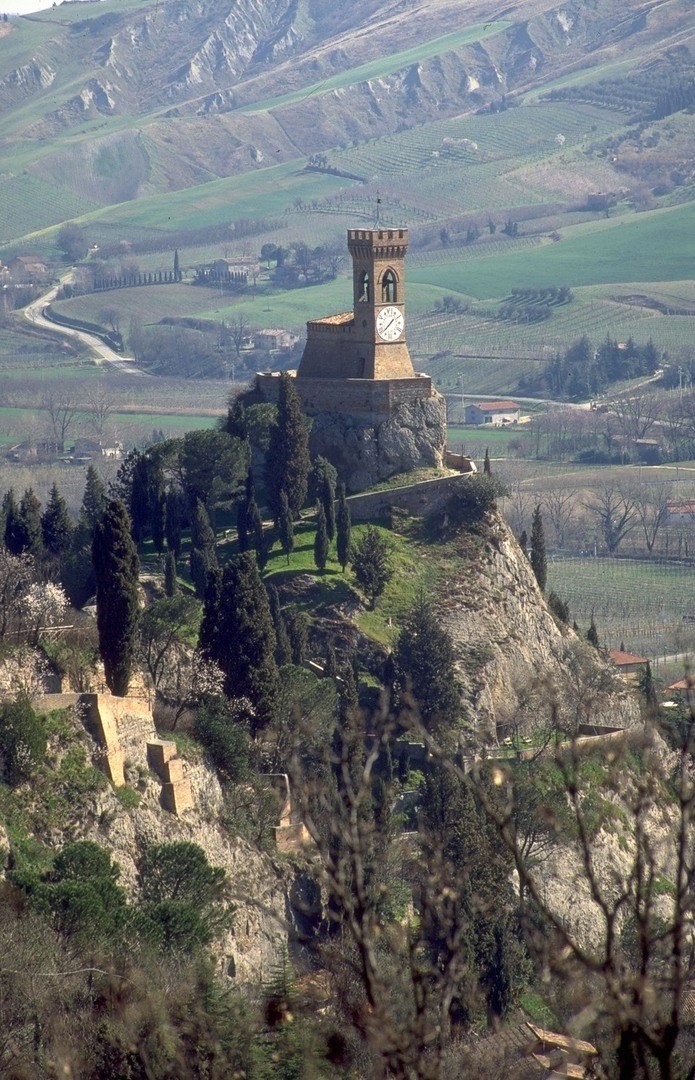 From above, a fortress, a church, and a crenelated tower watch over it like guardians. Brisighella reveals itself in the shimmering chalk outcrops and in glimpses of pastel colours of houses in the historic centre. It comes alive in its festivals involving you, the guest, in an unforgettable experience. In Brisighella it is impossible not to take the Antica Via del Borgo, also known as the Via degli Asini (Donkey Road): its distinguishing feature, making it unique in the world, is that it is a raised street that runs practically inside a row of buildings. Also worth seeing is the Pieve (parish church) of San Giovanni in Ottavo, or Pieve del Thò. Moving on to the Tre Colli, the fortress Rocca Manfrediana was built in the 14th century by the Manfredi, lords of Faenza, and then passed on to the Venetians. On top of one of the three hills stands the Clock Tower. The third hill is dominated by the Sanctuary of the Madonna del Monticino, dating from the 18th century. Leaving the village and immersing yourself in the fascinating surrounding area, you can visit the Tanaccia Cave, one of the most beautiful caves in the Vena del Gesso Regional Park: its landscape, the result of karst phenomena, can be visited all year round except during the period when the bats hibernate.

Typical food and wine products
Ravenna and Romagna are a hospitable land with an ancient culinary tradition.
Typical menus include tasty hand-made pasta dishes such as tagliatelle, lasagna, strozzapreti with meat sauce, passatelli made with parmesan and eggs, cappelletti filled with cheese, meat sauce or in broth, or seafood dishes such as risotto alla marinara (seafood risotto), tagliolini allo scoglio (mixed seafood tagliolini) or spaghetti con le vongole (spaghetti with clams).
This is followed by the classic grilled meat or fish (grigliate), washed down with wines from our hills.
You cannot leave Romagna without having tasted the fragrant piadine (thin flatbreads) stuffed with Squacquerone di Romagna, the local soft cheese, or with tasty sliced meats or salami.

Brisighella also offers gastronomic wealth. Its specificity, however, is greatly linked to the products of a territory that is still largely unspoiled and ecologically intact.
The reigning product is “Brisighello” extra virgin olive oil, which boasts a European DOP certification. We also can’t forget the cheese cured by aging in the gypsum caves, the meat of Mora Romagnola (an ancient breed of indigenous pig), the meats of the Romagnola cow breed, the forgotten fruits (including the Fox Pear), PGI Romagna Peaches, Nectarines and Apricots and, finally, the Moretto artichoke, typical of the ravine area. Excellences of the region’s wine production include the typical indigenous grape varieties of Romagna, in particular the Sangiovese DOC and the Albana di Romagna DOCG (the Passita version is excellent) which give rise to extremely high quality products. 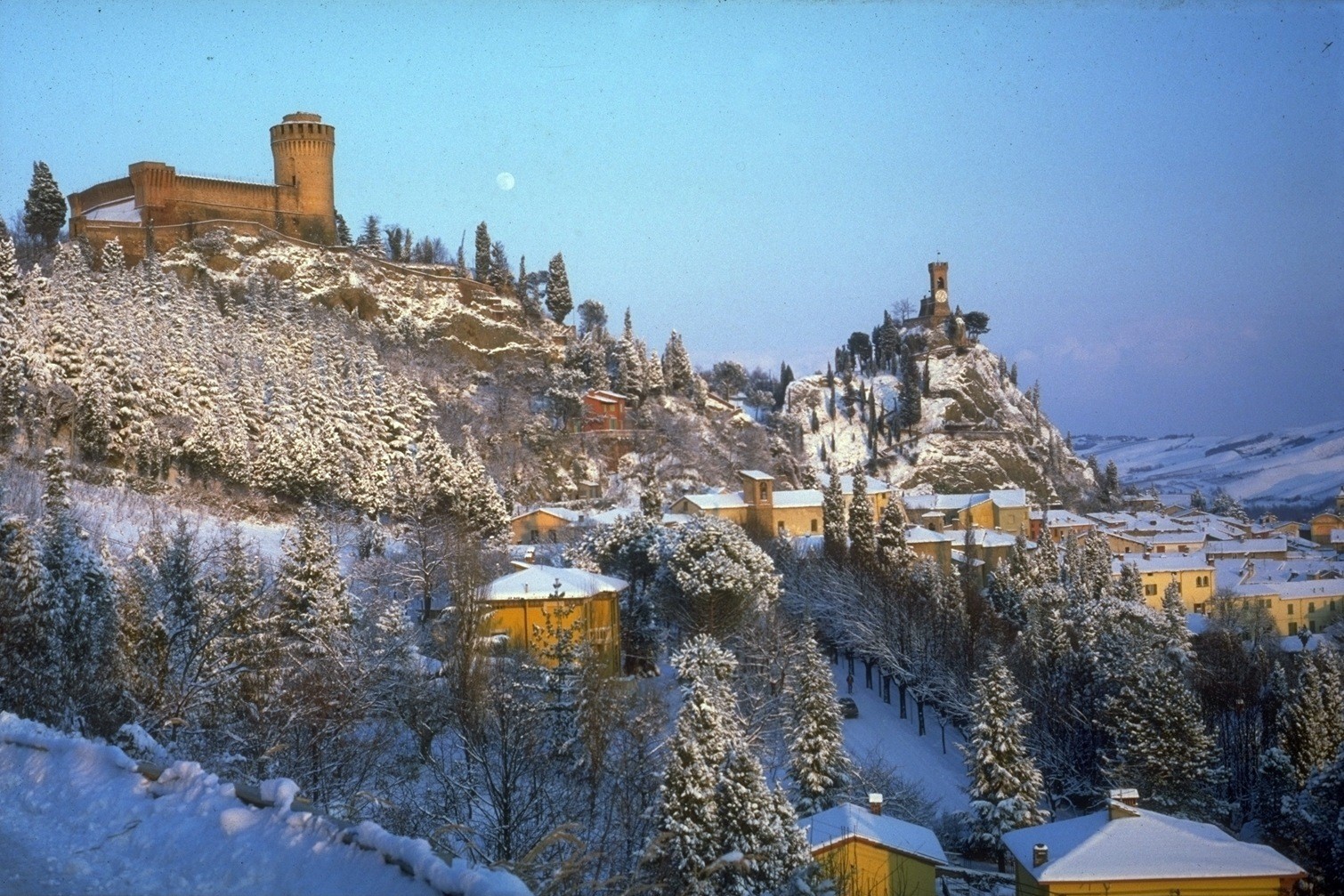 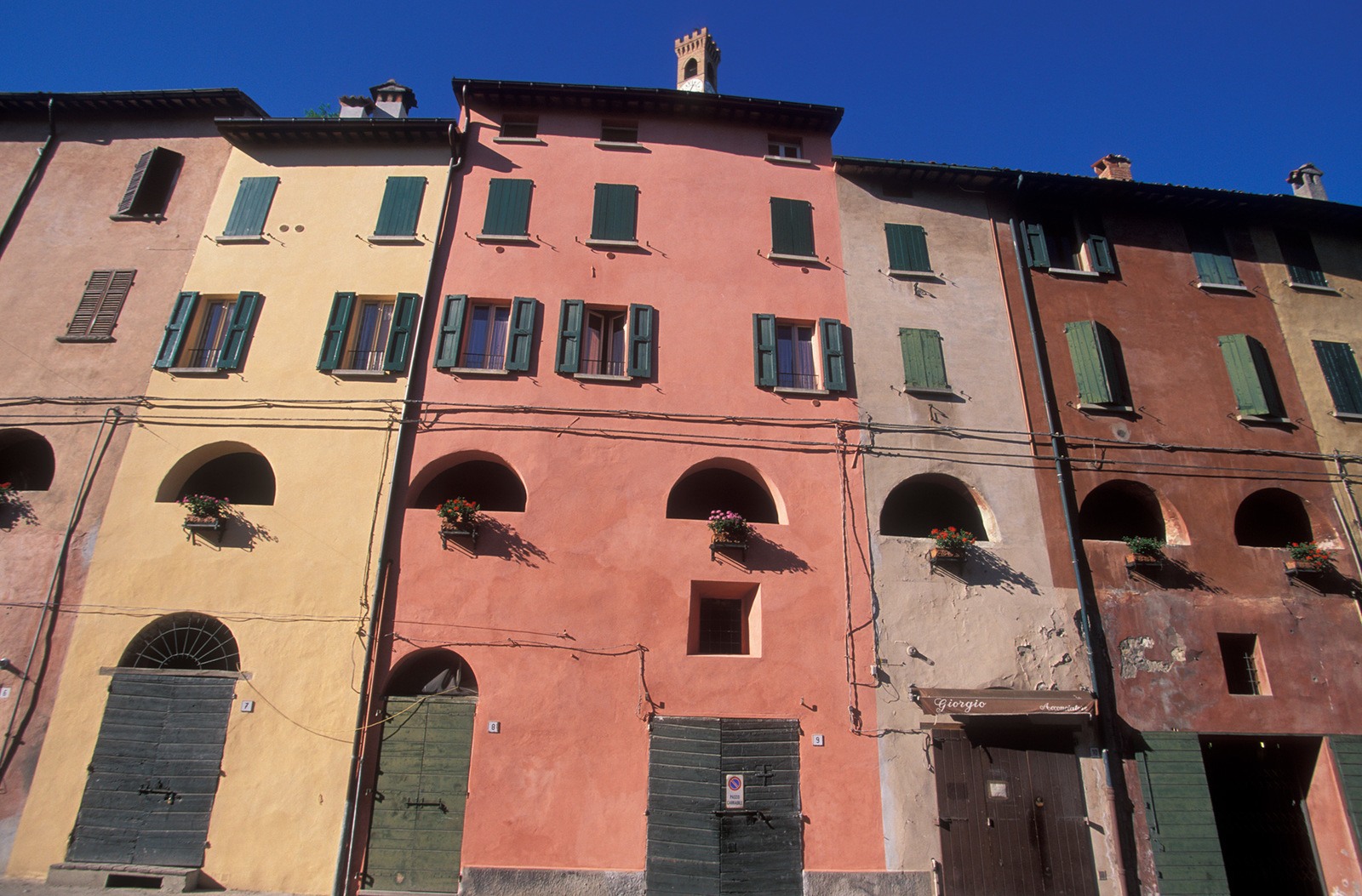 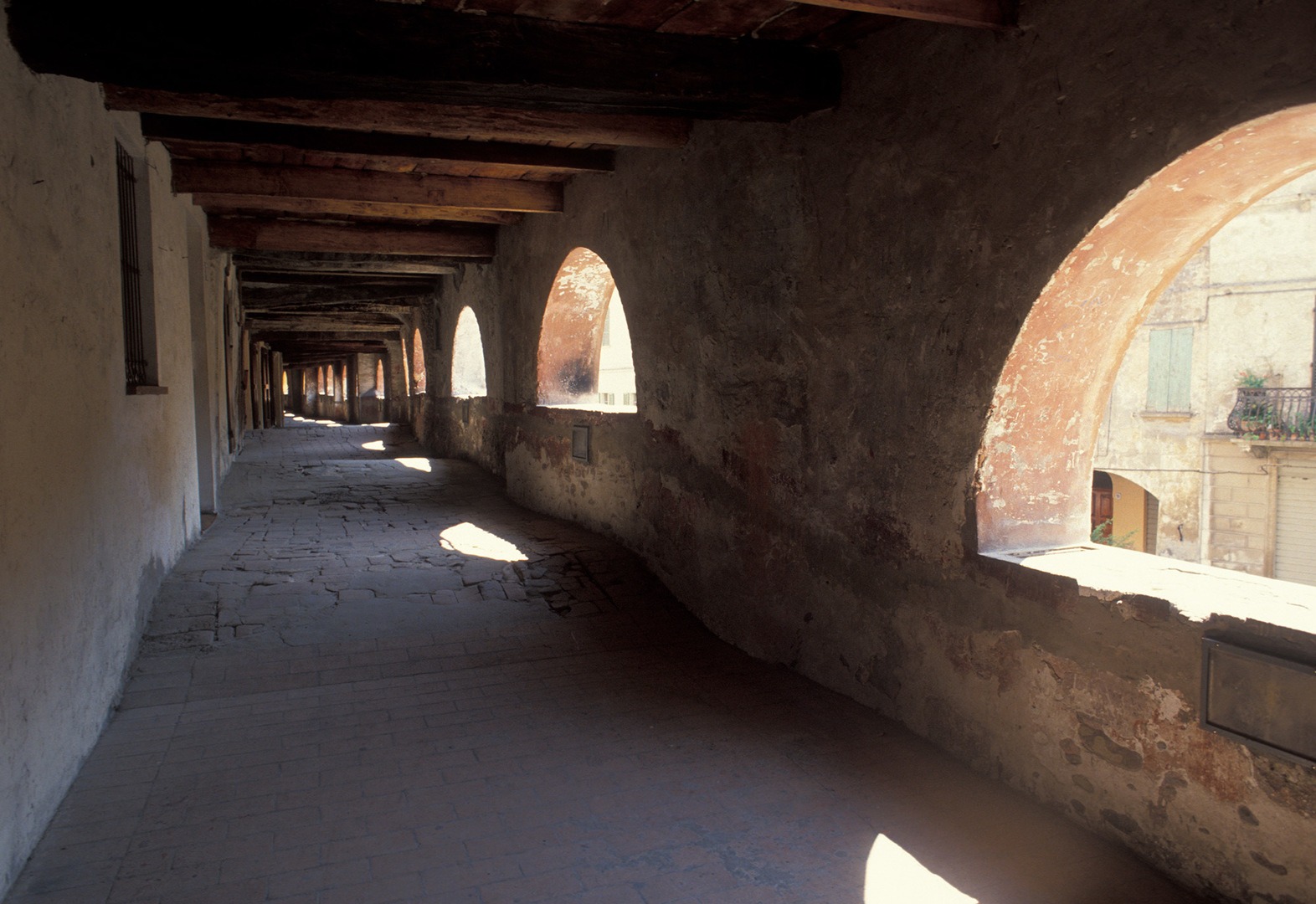 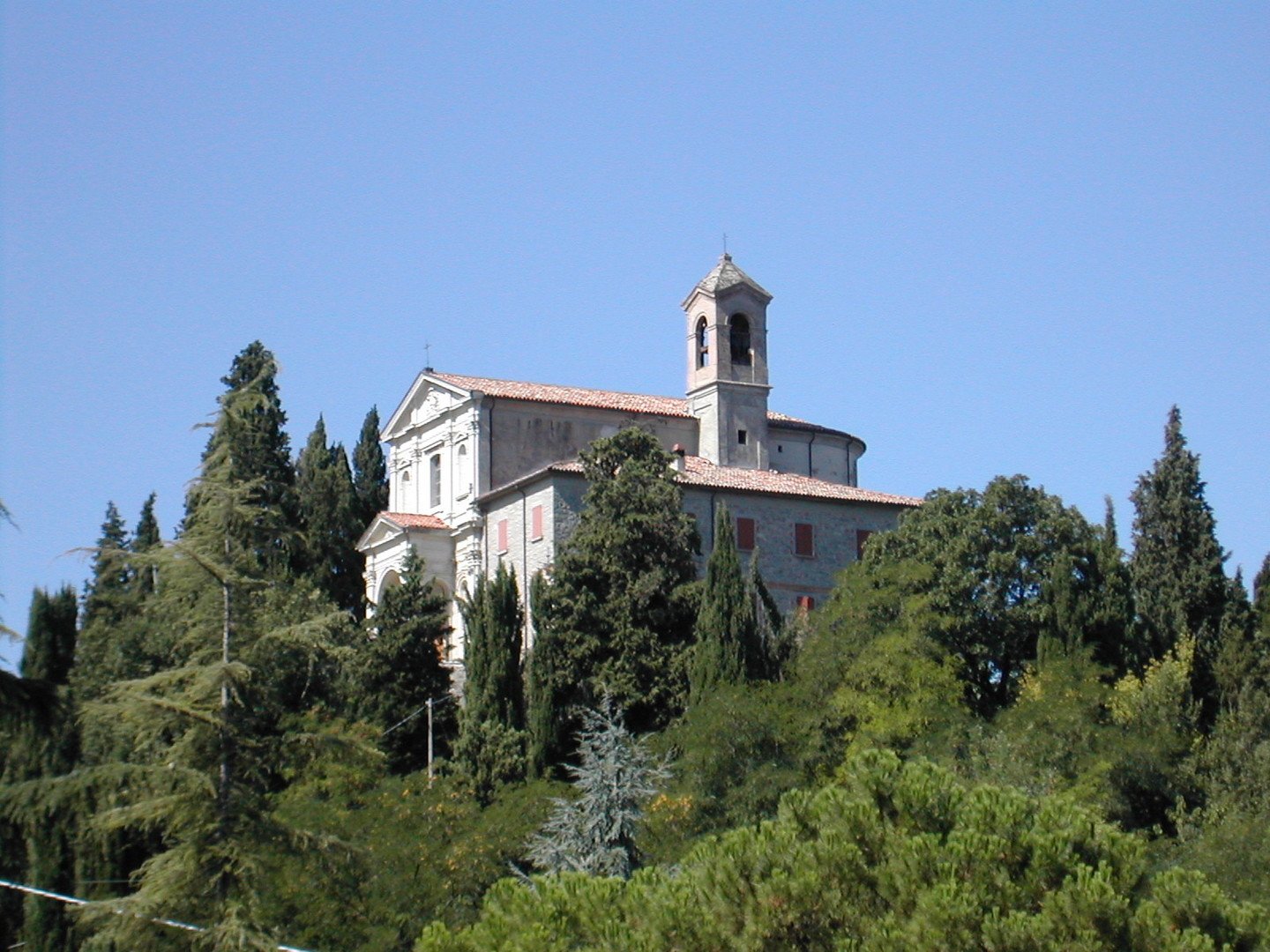 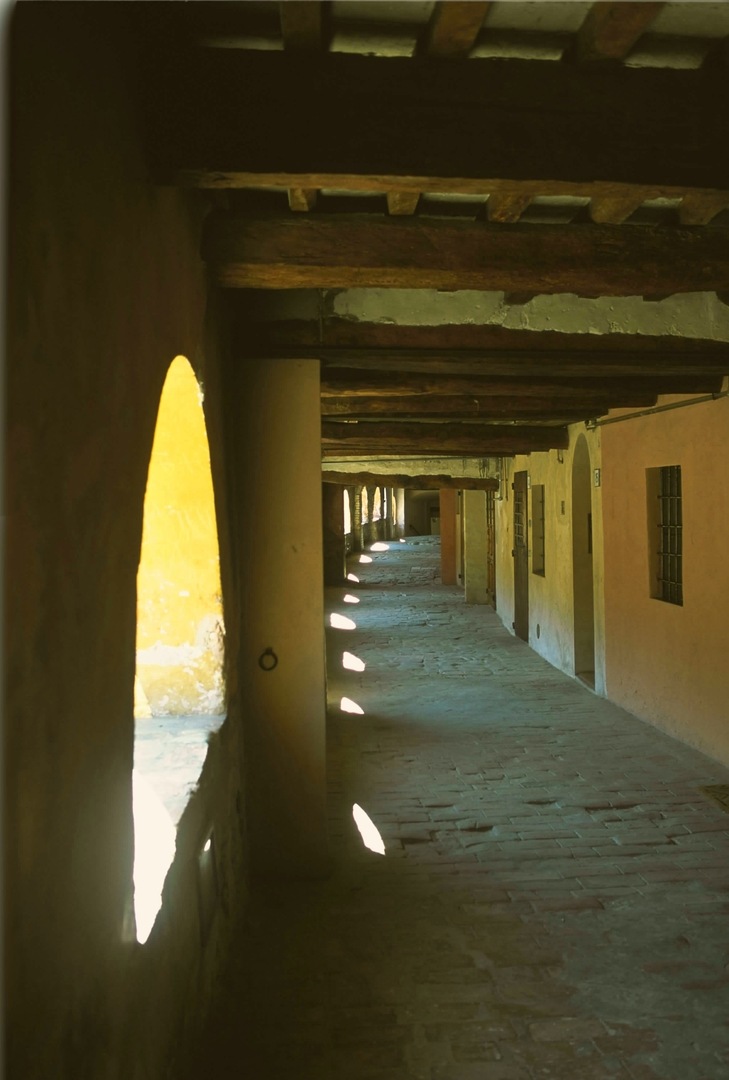 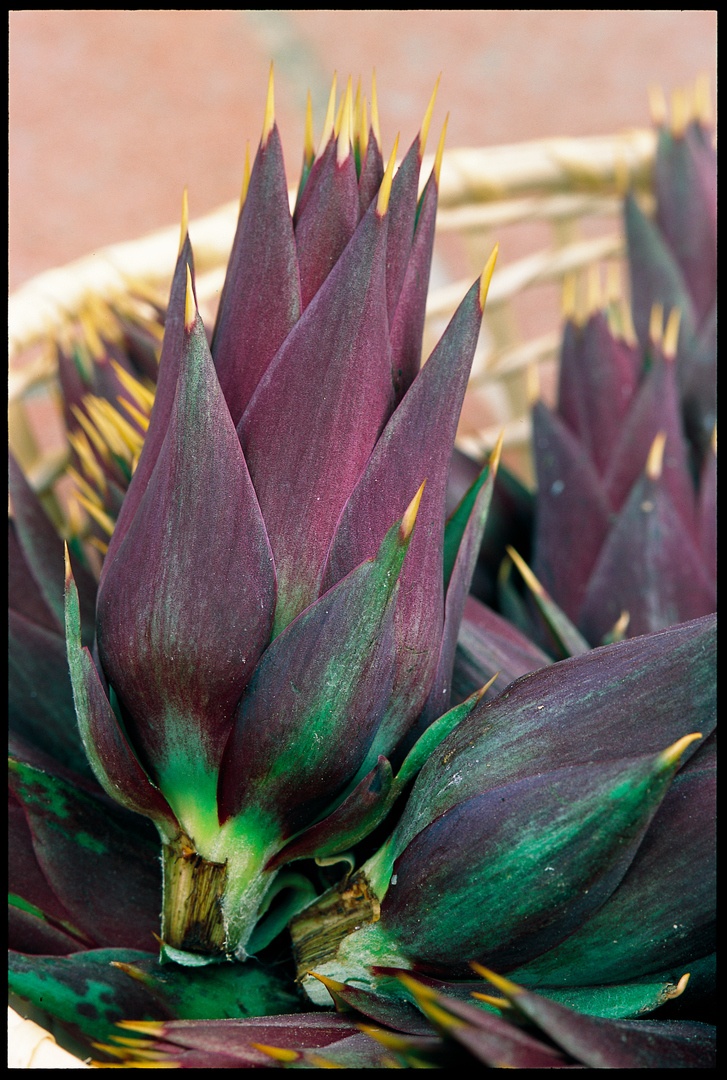 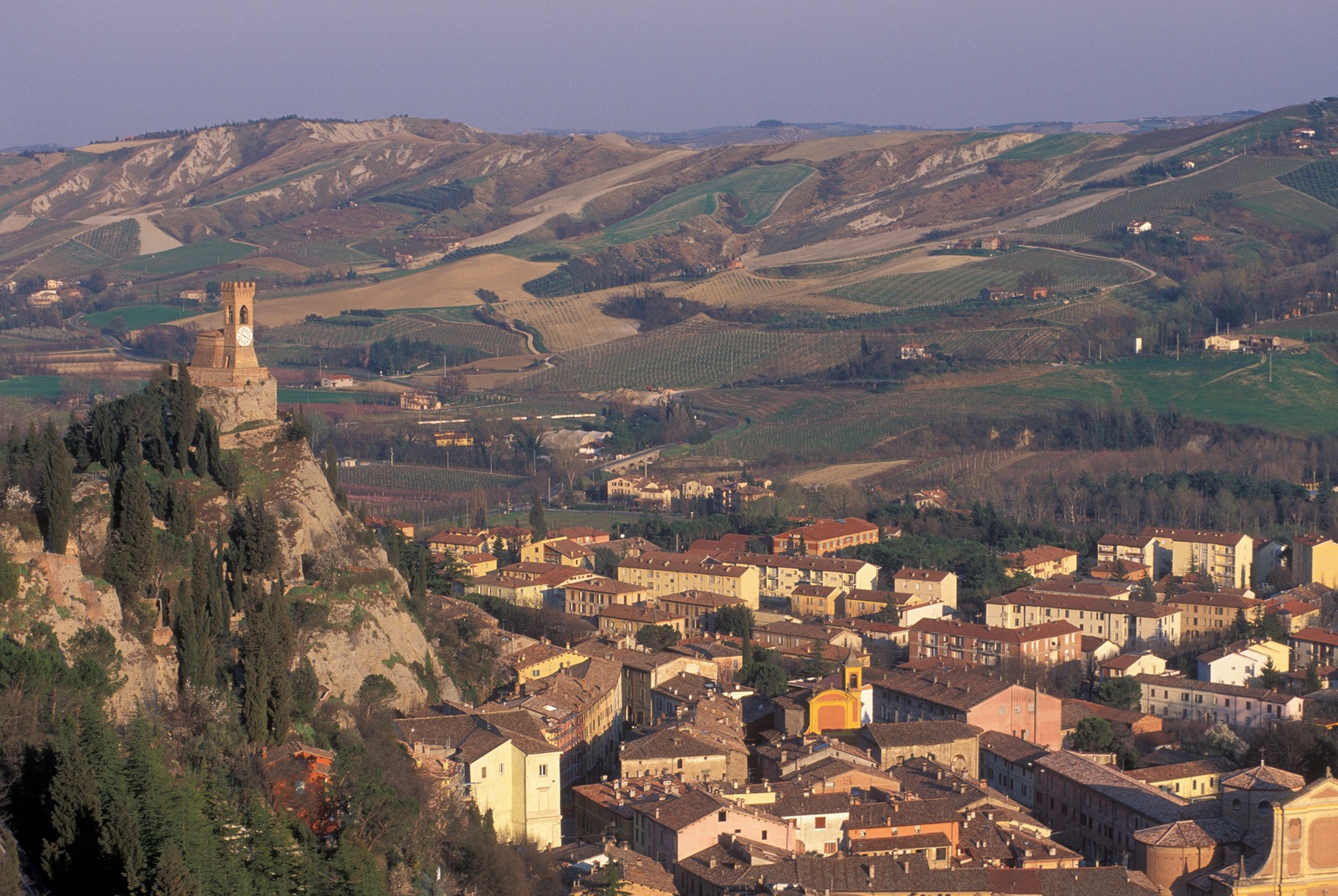