Bertinoro, the “Balcony of Romagna”, with a magnificent view of the sea and the hills, is also an ancient village that has preserved its ancient structure with cobbled streets and glimpses of other times.

The heart of Bertinoro is the spacious and elegant Piazza della Libertà which opens on one side onto the Romagna, and on the other looks out onto the Cathedral, Palazzo Ordelaffi, the Tower and, in the background, the Colonna delle Anella, the symbol of hospitality, the fulcrum of Bertinoro’s history and traditions. It is here in September that the important Hospitality Festival takes place, which sees the houses of the people of Bertinoro open up to guests, to offer them the famous Romagna lunch on the feast day.

The thousand-year-old fortress towers over the hill: beautifully restored and home to the University Residential Centre, it houses the Interreligious Museum, an authentic cultural jewel dedicated to the three great monotheistic religions.

Bertinoro is also a wine town. This is in fact one of the hilly areas of the region that is most suited to growing grapes. Around the village there are about a thousand hectares of vineyards, mainly with Sangiovese and Albana grapes, but also Cagnina and Pagadebit. These should not be tasted without being accompanied with the gastronomic specialties of the Romagna tradition, first and foremost the fragrant piadina or the delicious squacquerone.

Even Dante Alighieri was able to enjoy the hospitality of Bertinoro: in the hills around the village is Polenta, from which Guido da Polenta, lord of Ravenna, welcomed the exiled poet who definitely stopped off in the ancient Pieve (parish church) of Lombard origin, still splendidly preserved and sung of by Giosuè Carducci in his beautiful “Ode alla Chiesa di Polenta” (Ode to the Church of Polenta). 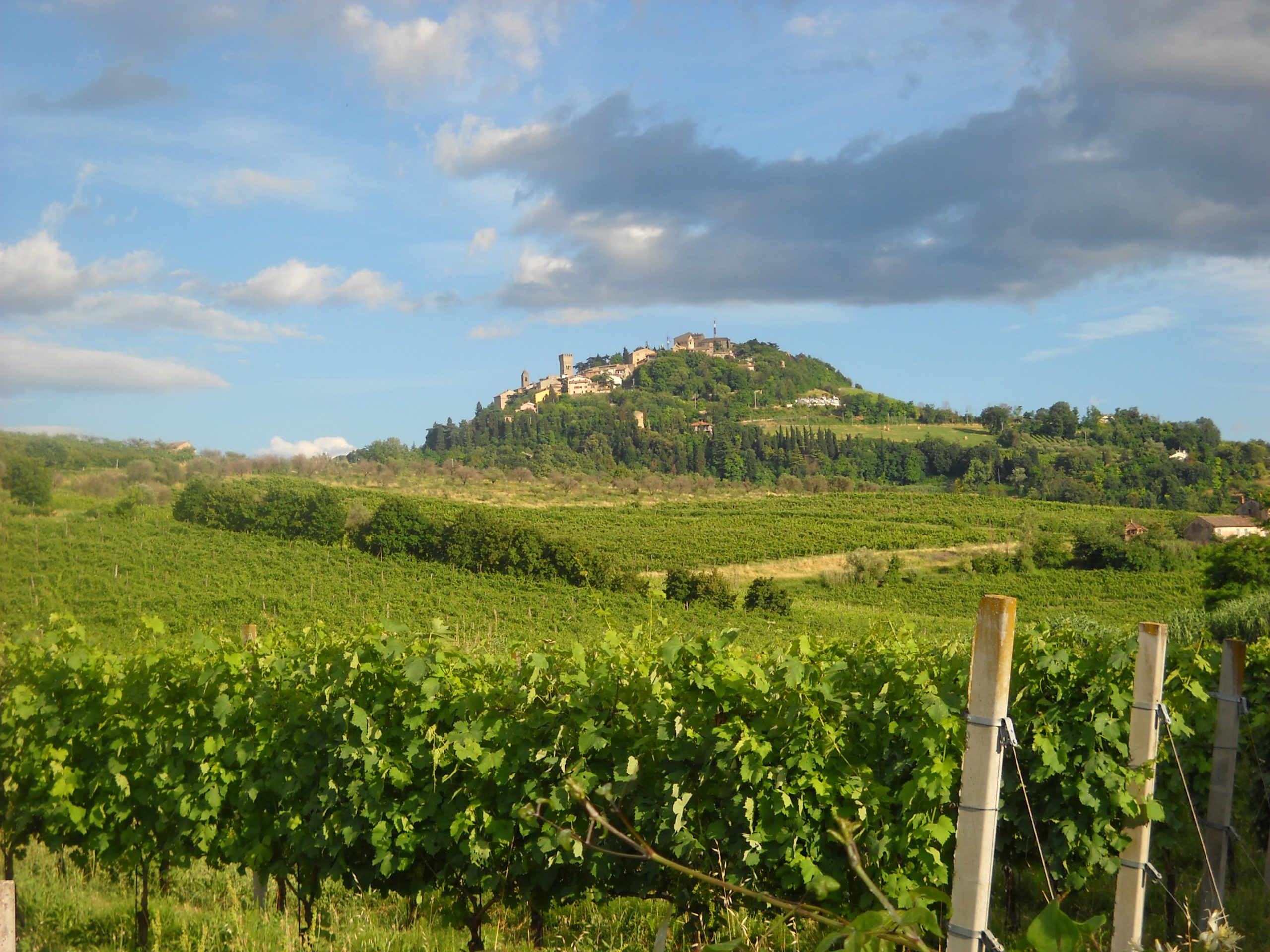 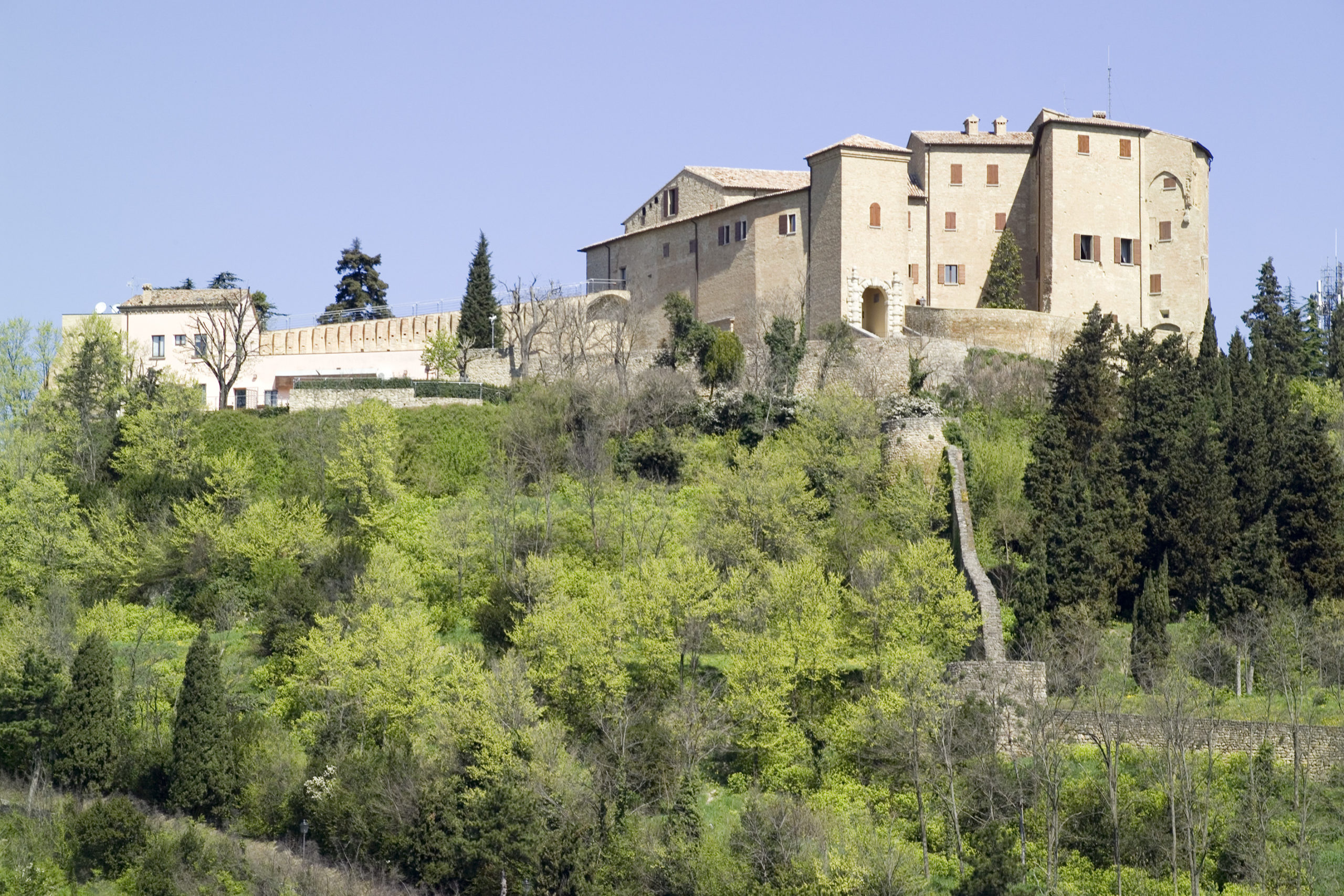 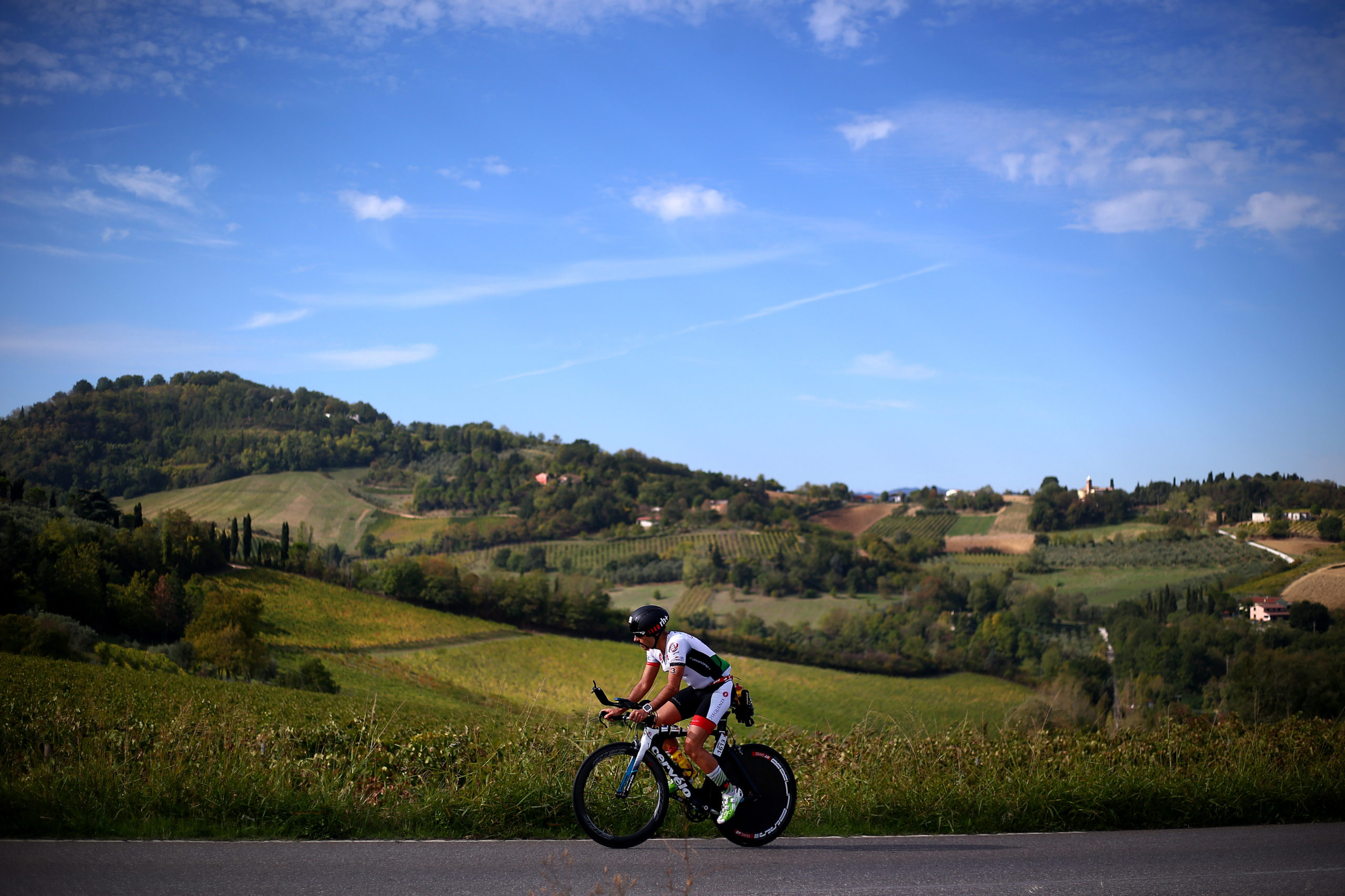 The tradition of hospitality has ancient origins here: since the Middle Ages, the village has opened its doors to pilgrims and the Colonna delle Anella (“Column of the Rings” or “Column of Hospitality”) is its most prized symbol. The bond between Dante and Bertinoro is one of hospitality, it being one of the first towns in Romagna to welcome the poet who took refuge with Scarpetta Ordelaffi, the Ghibelline lord of Forlì and Bertinoro. And the Da Polenta family, who hosted Dante in Ravenna during the final years of his life, was originally from Bertinoro.
In fact, several characters from Bertinoro appear in the Divine Comedy: the unforgettable Francesca da Polenta, the noble Guido del Duca and the kind brigades of Arrigo Mainardi and Lizio da Valbona.

Bertinoro and its wines

Bertinoro is a wine town.

This is in fact one of the hilly areas of the region most suited to growing grapes. Albana is the area’s most prestigious representative: a grape with a great personality and Italy’s first white DOCG. Although it is Sangiovese that holds the production record, which here, in the ‘riserva’ variety, is called ‘Bertinoro’.

Alongside them, it is also worth mentioning Bombino Bianco and Terrano, which in Romagna give rise to Pagadebit and Cagnina dolce respectively.

There are numerous wineries scattered throughout the area, as well as many places in the historic centre where you can learn about, buy or taste the local wines.

Bertinoro, the land of fans of

Bertinoro offers extraordinary opportunities for cycling and hiking enthusiasts, with itineraries to suit all tastes and levels: here you can cycle among lush vineyards and scenes of natural beauty along the roads on which great champions trained, such as Bertinoro’s Pambianco, protagonist of the Giro d’Italia and the great classics between the 1950s and 1960s, or more recently the unforgettable Marco Pantani. Or you can put yourself to the test by trying out at least one stretch of the Nove Colli, Italy’s most famous cycle tour, which starts in Cesenatico and runs up and down nine hills.

The charm of the Spungone

In prehistoric times, a large part of Romagna was submerged by water and marine deposits began to accumulate on some elevated areas: this is how the ‘spungone’ (from the dialect word ‘spungò’, spongy) was formed, a type of calcareous sandstone rock made up of a coarse mixture of shells, on which the hill of Bertinoro stands today. Its beauty lies in the visible stratifications left by the long work of the seas. Unsurprisingly, it is the stone used to build the most important palaces and buildings in the historic centre: Palazzo Ordelaffi, the Rocca (home to the University Centre and the Interreligious Museum), the defensive walls and the gates to the village.

In Bertinoro, the culture of wine and good food, combined with the legendary hospitality, is one of its defining characteristics.

Albana, in its “Gentile di Bertinoro” variety, is the most area’s most prestigious representative. The varieties on offer — dry, sweet, sparkling, amabile (semi-sweet) and straw — show how versatile and well-established this grape is, the first white DOCG in Italy. However, today it is Sangiovese that holds prime position when it comes to production. Sangiovese which here, in the ‘riserva’ variety, is called ‘Bertinoro’, due to the ‘additional geographical mention’. Alongside these, it is also worth mentioning Bombino Bianco and Terrano, which in Romagna give rise respectively to the Pagadebit (so called because its high yields allowed the peasants to ‘pay their debts’) and Cagnina Dolce.

To taste them, to have them “described” to you or to buy them, there is nothing better than going to one of the many wineries in Bertinoro along the Wine and Food Trail of the hills of Forlì-Cesena. Alternatively, you can take a break in one of the many bars and restaurants dotted around the historic centre of the village, where local wines are served with traditional Romagna specialities. First courses are created by the hands of the “sfogline” (pasta makers) who still work the pasta with rolling pin. Equally there is the fragrant piadina, “national bread of the Romagna people”, the ideal accompaniment for the local cured meats and tasty fresh cheeses, especially the delicious squacquerone, a very soft, round, rindless DOP cheese. Also delicious with jams, saba (grape syrup or cooked must) and savor (fruit preserves made from must).

Welcome to Bertinoro, a friendly village where hospitality reigns supreme

Bertinoro’s history is woven with precious threads. The gold thread, which shines out in its name (“oro” means gold), and which — according to an evocative legend — was given to it by the Empress Galla Placidia. After having tasted Albana, a delicious wine from these hills, she is said to have exclaimed have exclaimed “Tu sei degna di berti in oro!” (you should be drunk in gold vessels!). Even more precious is the red thread of hospitality that since the Middle Ages has guided this village (from which you can enjoy an incomparable panorama – hence the nickname ‘Balcony of Romagna’) to open its doors to pilgrims, travellers and exiles.

In Bertinoro, the heart and symbol of the community is, in fact, the Colonna delle Anella (“Column of the Ring” or “Column of Hospitality”), dating back to the 13th century: by tying their horses here, the knights designated the noble family that would host them. Today, every first Sunday in September, a historical procession featuring flag-weavers, ladies and knights makes for an impressive Commemoration of Hospitality. The real protagonists, however, are the visitors who are asked to choose one of the many envelopes hanging from the Column to become the guests of honour of a village family. The ancient aptitude for hospitality is also evidenced by the fact that Bertinoro offered refuge to that most illustrious of fugitives, Dante Alighieri. Among the places linked to his memory, the first is the Colonna degli Anelli: in Purgatorio Canto XIV the Supreme Poet meets its creator, Guido Del Duca and with him, referring to Bertinoro, remembers “the ladies and the knights, labours and leisure / to which we once were urged by courtesy / and love”.

Behind the Colonna is the austere Palazzo Ordelaffi, now the town hall, also linked to the memory of Dante. Among the first in Romagna to offer Dante refuge was the powerful Ordelaffi family, who at the time dominated Bertinoro and who had the building erected at the beginning of the 14th century, opposing the return of Romagna to the rule of the State of the Church throughout this century. The Palazzo is indisputably the custodian of Bertinoro’s civil and historical memories. Although restored in the 1930s, it retains its medieval charm. A palace of beauty and a symbol of inalienable freedom, it was defended tool and nail even when the bishops wanted to tear it down to make room for the Cathedral of St Catherine of Alexandria.

However, the poet was not housed here (the palace was still under construction), but spent one of the first winters of his exile in the imposing fortress overlooking the village, perched on a spur formed by the ‘spungone’, the particular rock which forms the hills of this part of Romagna. It takes just a short walk to reach it, following the steep road that leads to the top of the hill, and the effort of the climb is rewarded by the view, from which you can see the coast which the Po flows down to, to quote Dante. Completely restored at the end of the 1990s, the fortress is now a place of excellence in higher education for students and scholars from all over the world, housing, in the oldest part, the evocative and fascinating Interreligious Museum, dedicated to dialogue between Jews, Christians and Muslims .

But it is the ancient Pieve di San Donato, in the village of Polenta, that is the most resonant of Dante. It was, in fact, Guido da Polenta, then lord of Ravenna, who offered refuge to Dante in the last years of his life. Giosuè Carducci — to whom a hermitage next to the parish church was dedicated — recalls Dante in his famous ode “La chiesa di Polenta” (The Church of Polenta), depicting him kneeling in meditation between the quiet naves of the parish church and imagining Francesca da Rimini (daughter of the “Da Polenta” family) there, to temper “the ardent eyes to a smile”. One of the hillocks near Polenta preserves the memory of the famous ‘Cypress of Francesca’. To tell the truth, the original tree was destroyed by lightning, but it was replaced by a new cypress planted by Carducci himself in 1897, as photos taken at the time testify. 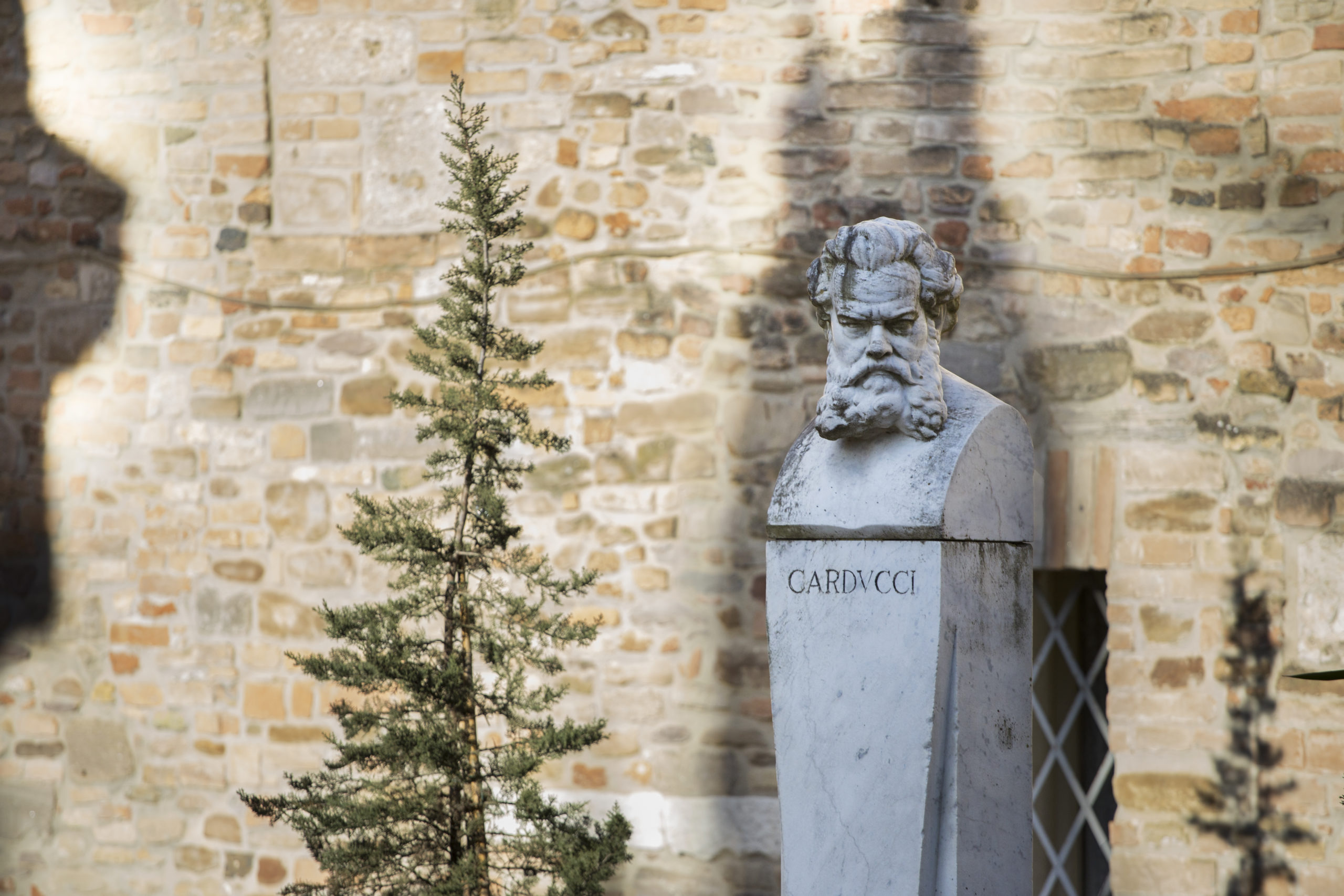 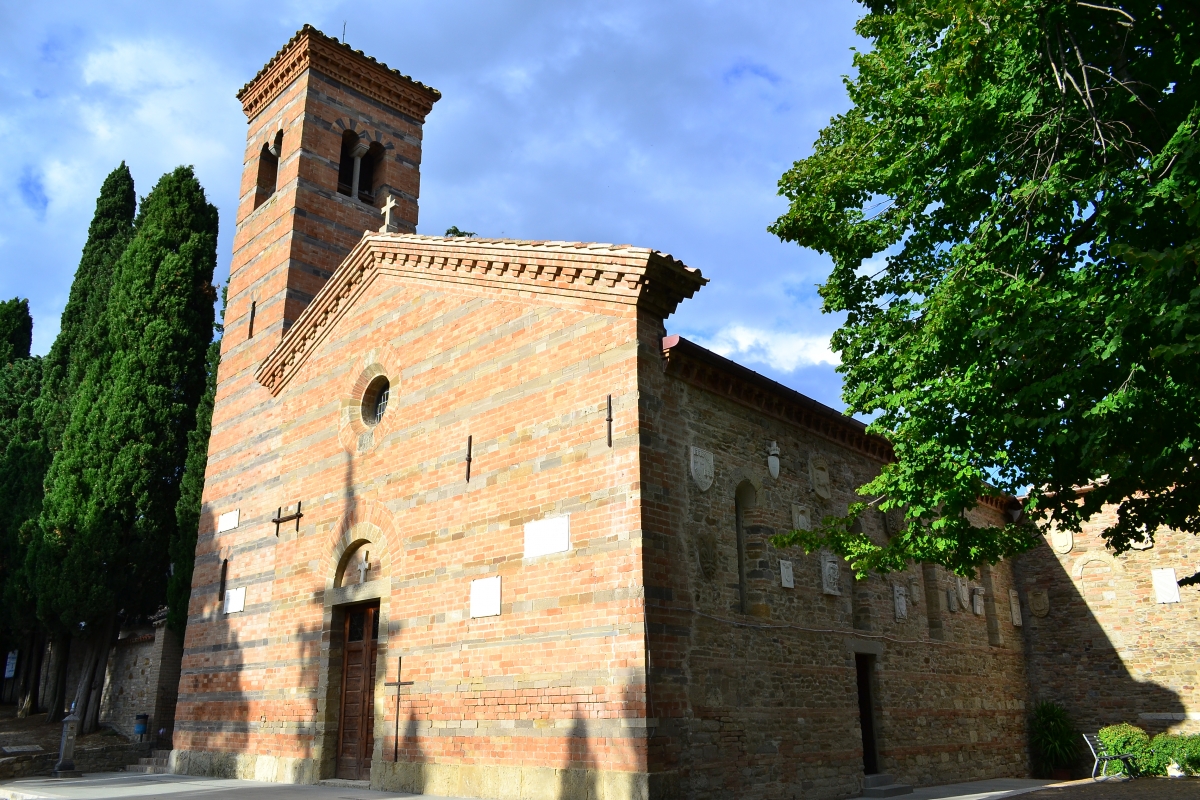 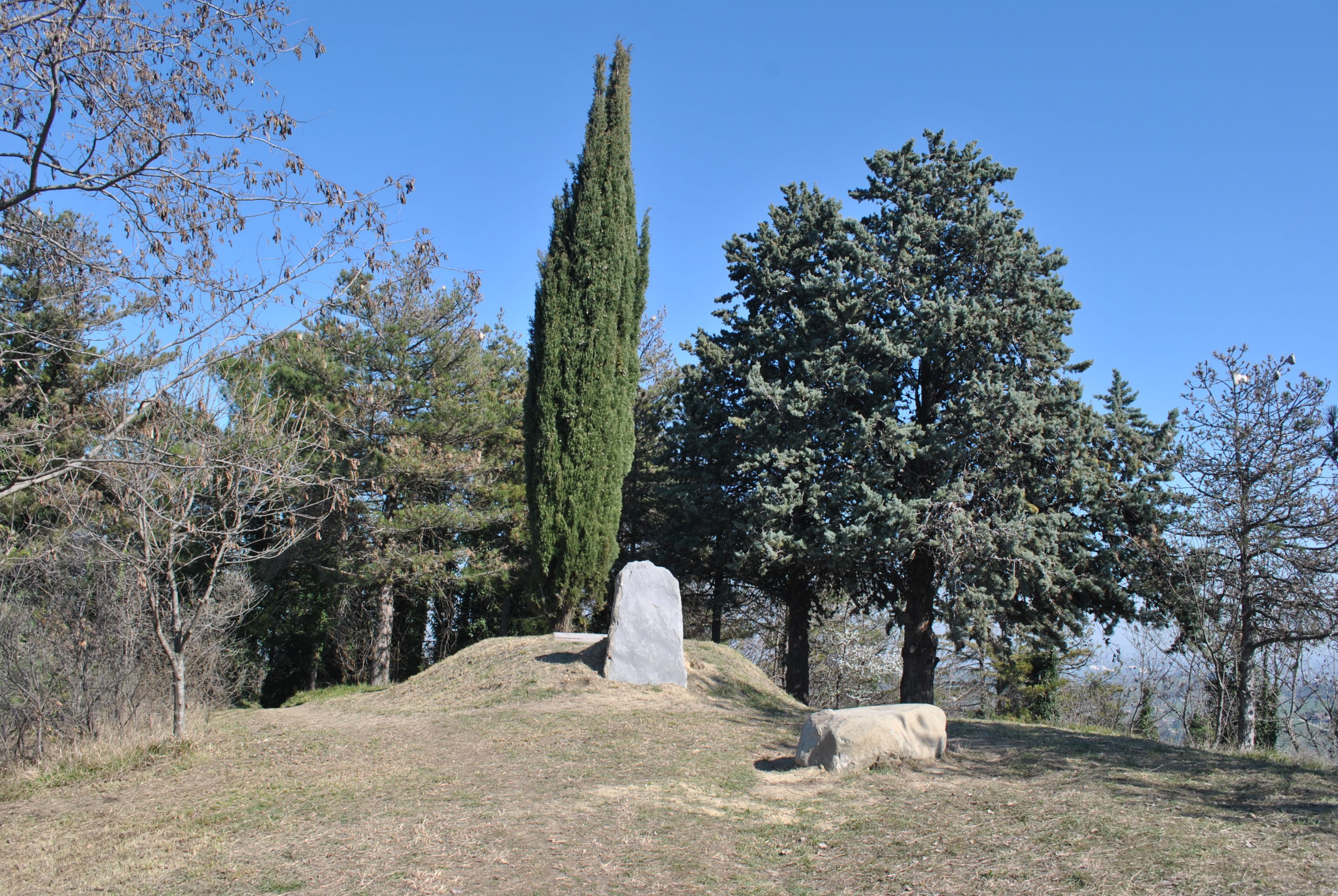 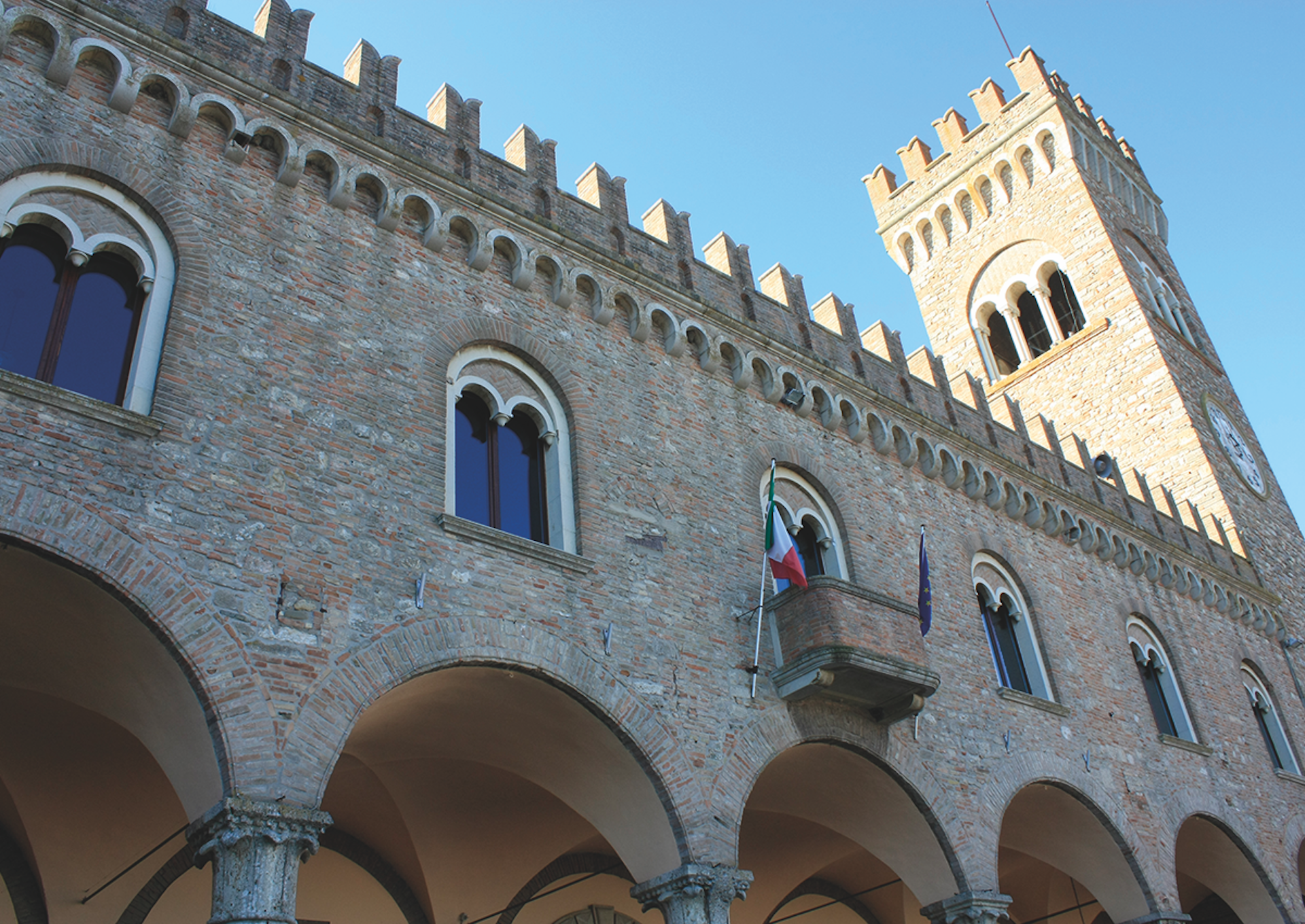